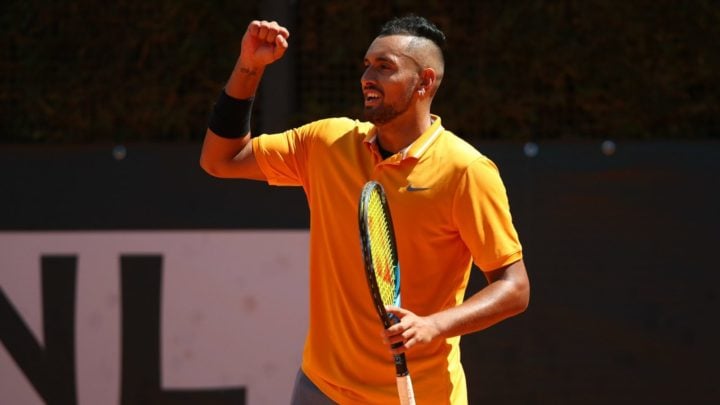 Tennis star Nick Kyrgios has been disqualified from the Italian Open following a massive tantrum which saw him throw a chair, lash out at spectators and swear at an umpire. Source: Getty

He’s no stranger to tantrums on and off the tennis court and Nick Kyrgios’ behaviour is once again making headlines for all the wrong reasons. The tennis star faces suspension and a heavy fine after his latest spat – which got him kicked out of the Italian Open.

The 24-year-old was defaulted from his second-round match against Norwegian player Caspar Rudd in the Italian Open overnight. According to Newscorp, Rudd was leading 6-3 6-7 (7-5) 2-1 when Kyrgios lost a point on a serve and received a formal warning for ball abuse.

Unhappy with the reaction he was receiving from the crowd, Kyrgios lashed out at spectators and was docked a point for unsportsmanlike conduct.

According to the report, he called the game umpire a “f****** idiot” before smashing his racket, kicking a water bottle and hurling a chair across the court.

The audience could be heard gasping in shock at this point. Kyrgios then packed up his belonging, shook hands with Rudd and the chair umpire and stormed off the court.

Rough day for Nick Kyrgios at the Italian Open. pic.twitter.com/7pHQDjFqe6

Kyrgios will lose US $33,635 (AUD $48,200) for the incident, will be fined 45 ATP points and may be subjected to further punishment and investigation. He took to social media to address his behaviour.

“Very eventful day to say to the least,” the world No. 33 wrote on Instagram. “Emotions got the better of me and I just wanted to say that the atmosphere was crazy out there today, just super unfortunate that it had to end in a default.”

It’s not the first tantrum he’s thrown in recent times. After being spectacularly defeated by Philip Kohlschreiber at the BNP Paribas Open at Indian Wells in March, Kyrgios smashed his racquet in front of a packed arena.

Later in that match, he was spotted throwing his shoes into the audience during the break between sets. By this point, he’d already put another pair of shoes on his feet.

The latest spat comes a day after he publicly slammed opponents Rafael Nadal, Novak Djokavic and more in an explosive interview, dishing out a series of personal attacks on the sports players.

During a 50-minute interview for the No Challenges Remaining podcast, the star said he had no respect for Nadal. He added that while Djokovic was an “unbelievable player”, there was no way the “cringeworthy” player would surpass the talented Roger Federer.

Taking major aim at Djokovic, Kyrgios claimed he gets frustrated with the world number one for apparently wanting to be just like Federer. Kyrgios said despite his obvious talent, Djokovic will never be considered the greatest player in his mind.

“I just feel like he has a sick obsession with wanting to be liked,” he told podcast host and New York Times tennis writer Ben Rothenberg.

What do you make of Nick Kyrgios’ behaviour? Do you think he should be allowed to continue playing tennis?