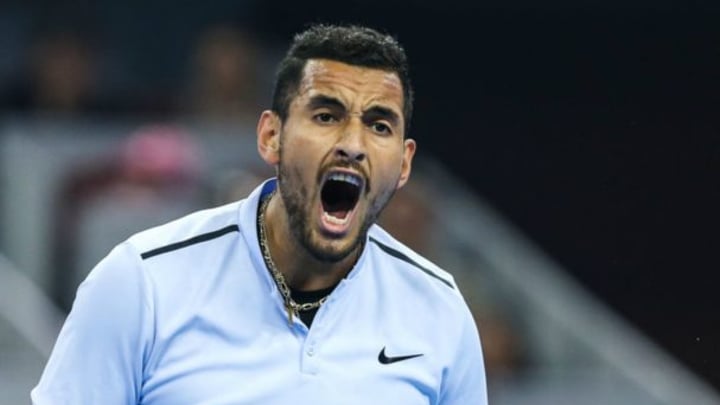 Controversial tennis star Nick Kyrgios has slammed opponents Rafael Nadal, Novak Djokavic and more in an explosive interview, dishing out a series of personal attacks on the sports players.

The controversial Aussie sportsman, known for his on court antics and foul-mouthed rants, didn’t leave any stone unturned in the chat on the No Challenges Remaining podcast – even calling current world number two Nadal a “super salty” sore loser.

During the 50 minute interview, the 24-year-old claimed he has no respect for Nadal and he believes, although Djokovic is an “unbelievable player”, there is no way the “cringeworthy” player will surpass the talented Roger Federer.

While he praised the likes of fellow young gun Thanasi Kokkinakis, Scotland’s Andy Murray and Federer, the same could not be said for Nadal and Djokavic who received the brunt of the criticism.

Taking major aim at Djokovic, Kyrgios claimed he gets frustrated with the world number one for apparently wanting to be just like Federer. Kyrgios said despite his obvious talent, Djokovic will never be considered the greatest player in his mind.

“I just feel like he has a sick obsession with wanting to be liked,” he told podcast host and New York Times tennis writer Ben Rothenberg.

He went on to attack the tennis star’s famous ‘feel the love’ celebration after winning matches, which famously sees him throw his arms up in front of him.

“This whole celebration thing is so cringeworthy, it’s very cringeworthy,” he added. “Djokovic just riles me the wrong way. He always says what he thinks he needs to say rather than his actual opinion. The celebration just kills me. Honestly if I play him and beat him again, I’m doing the celebration in front of him, that would be hilarious.”

“Every time I’ve beaten him… when he wins, it’s fine. He won’t say anything bad, he’ll credit the opponent, ‘He was a great player’. But as soon as I beat him it’s just like, ‘He has no respect for me, my fans and no respect to the game’. And I’m like, ‘What are you talking about? I literally played this way when I beat you the other previous times and nothing changed, nothing changed’.”

He continued by shifting his outrage to Nadal’s ex-coach Toni, more commonly known as Uncle Toni.

“And then Uncle Toni came out saying, ‘He lacks education’,” Kyrgios added. “I’m like, ‘Bra, I did 12 years at school, you idiot. I’m very educated. I understand that you’re upset I beat your family’.”

But what he said about Nadal and Djokovic was nothing compared to his thoughts on Spanish veteran Fernando Verdasco. Although he has moved out of the spotlight recently, that hasn’t faded Kyrgios’ hate for the former world number seven.

“Verdasco drives me nuts, man,” he exclaimed. “That guy… I don’t even want to talk about it.

“It gets me so vexed, I’m like angry now that I just hear that name. He’s the most arrogant person ever.”

Are you a fan of Nick Kyrgios? What do you think of his comments about Nadal and Djokovic?