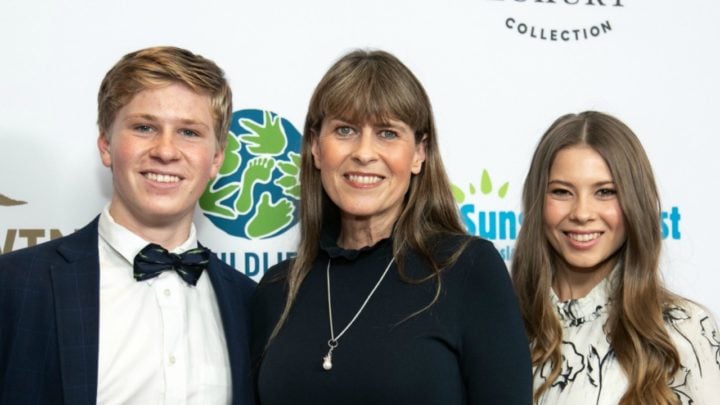 Robert, Terri and Bindi Irwin stepped out for a special gala dinner to honour the late Steve Irwin. Source: Getty

The much-loved Irwin family swapped their usual khaki outfits for glitz and glamour as they honoured the late Steve Irwin at a special gala dinner this week.

Terri, Bindi and Robert looked every bit the stars in stunning formal wear for the event in Los Angeles to celebrate the second season of their reality program Crikey! It’s the Irwins.

Proud mother Terri, 54, opted for a pretty floral skirt for the occasion, paired perfectly with a simple black top and nude heels.

Posing happily beside her was 20-year-old Bindi in a white and black frock. The gorgeous daughter of the famous wildlife warrior stood tall in black heels while she kept her long locks down with a slight wave.

Last nights #SteveIrwinGala was such a success and a truly wonderful night. Thank you to everyone who made the night possible and for your incredible generosity 🙏❤️

Following in “the Crocodile Hunter’s” footsteps, as he was more commonly known, young Robert made sure not to leave his beloved animals behind, posing with a large python curled around his neck.

The event was held in celebration of the family’s TV show with a special preview screening of the second season.

Much like Steve’s famous program, which aired from 1996 to 2007, Crikey! It’s the Irwins gives fans an insight into their wildlife adventures and the famous Australia Zoo on the Sunshine Coast .

Robert, Bindi and Terri all took to social media throughout the gala dinner to thank everyone for their support, posting sweet messages and snaps from the special event.

“Last nights #SteveIrwinGala was such a success and a truly wonderful night,” Robert wrote on Instagram. “Thank you to everyone who made the night possible and for your incredible generosity.”

Meanwhile Bindi shared a snap of herself cuddling up to perhaps not everyones favourite creature.

“Okay fam … spot Harriet, she wrote on Instagram alongside a photo of herself with a spider on her dress. “I have officially decided that I can never do another red carpet without a tarantula.”

Sharing a photo of herself with her beloved kids and Bindi’s long-term boyfriend Chandler Steve’s widow wrote: “Many thanks to everyone who joined us last night at the Steve Irwin Gala Dinner. So much love and support to protect wildlife @wildwarriors.”

Many thanks to everyone who joined us last night at the Steve Irwin Gala Dinner. So much love and support to protect wildlife @wildwarriors! pic.twitter.com/qHL9ZLrBS4

Fans were quick to show their support for the Aussie family with supportive messages for the three who have carried on Steve’s legacy.

“You all looked smashing,” one person wrote on Twitter. “The animals are always educational. Gratitude for the Australia Zoo staff, vendors who donated time and supplies. Hope you all get some well earned rest.”

Another added: “What a beautiful family and an amazing cause.”

While a third simply said: “You are AMAZING!”

Are you a fan of the Irwins?