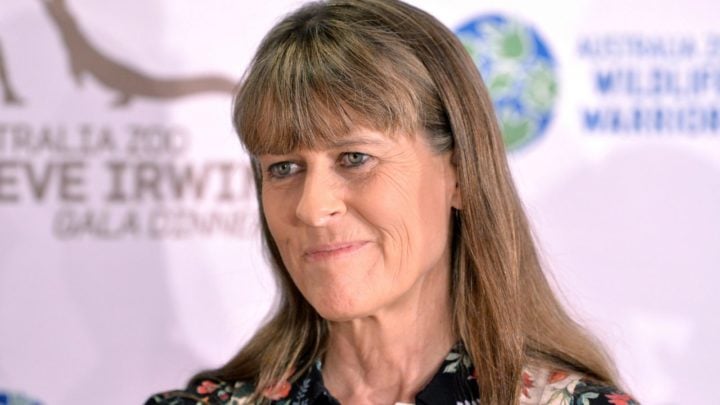 Terri Irwin completely transformed as she stepped away from her usual khaki attire and modelled a gorgeous floral frock and heels at the annual Steve Irwin Gala Dinner at Brisbane Convention and Exhibition Centre on Saturday.

The widow of famous ‘Crocodile Hunter’ Steve Irwin looked stunning in the pretty dress as she attended the gala alongside her daughter Bindi, son Robert and future son-in-law Chandler Powell.

Standing tall in nude strappy heels, the mother-of-two posed confidently for cameras on the red carpet with her children – with her her normal boots nowhere in sight as she showed off her fabulous figure.

Terri even splashed on some makeup for the special occasion, bringing a pop of colour with a soft pink lip and a swipe of blush on her cheeks. Meanwhile, the 55-year-old wore her blonde locks down and straight.

The wildlife warrior shared in the special moment with her children, with Bindi looking equally as stunning in a chic black velvet jacket and black skinny jeans. The 21-year-old kept things simple with a pair of black boots, while she styled her hair in soft waves. Her fiance Chandler kept things smart in a navy blue suit which he coordinated with a matching bow tie and brown dress shoes.

Taking to Instagram before the event Bindi wrote: “Dressing up a little for our Brisbane #SteveIrwinGalaDinner but always keeping a touch of khaki. Tonight we raised funds and awareness for Wildlife Warriors. It’s an honour to be continuing Dad’s legacy with the global conservation work he was so passionate about.”

Dressing up a little for our Brisbane #SteveIrwinGalaDinner but always keeping a touch of khaki 💛 Tonight we raised funds and awareness for Wildlife Warriors. It’s an honour to be continuing Dad’s legacy with the global conservation work he was so passionate about.

It comes after Bindi shared a sneak peek at her wedding dress after finally settling on a stunning lace design – and it looks to have been inspired by Terri’s own gown. The mum-of-two chose a white full-length dress with intricate laced sleeves when she tied the knot with Steve on June 4, 1992.

A photo, posted by Bindi previously, showed her parents smiling happily as they cut the cake, with Terri staring down and laughing with a dramatic flower band in her curly hair. Steve looked very smart out of his signature khakis at the time, wearing a black tux and bow tie.

The most beautiful soul mates the world has ever seen ..

And while Bindi is yet to reveal her full design, the sleeves she has chosen look almost identical. The 21-year-old has shared a new photo on Instagram showing the sleeve of her chosen frock with lace detailing right down to her hand. With her huge diamond engagement ring on show in the photo, the dress above it looks classy and elegant – with more gowns lined up behind her in a suite, which many of her fans have claimed looks similar to that used on US TV series Say Yes To The Dress.

I said yes to the dress 💍

Bindi appeared to drop a further hint that she’d appeared on the show, as she captioned the photo: “I said yes to the dress.” While she’s no doubt keeping it secret from her future husband Chandler Powell, he was quick to comment on the photo: “I can’t wait,” before adding: “You’re going to be so beautiful.”

The couple announced their engagement earlier this year on Bindi’s 21st birthday and she previously explained how happy she was to have Robert take on the role of walking her down the aisle, and how proud their late father Steve would have been of her brother.

Are you a fan of the Irwin family? What do you think of Terri's outfit choice for the event?