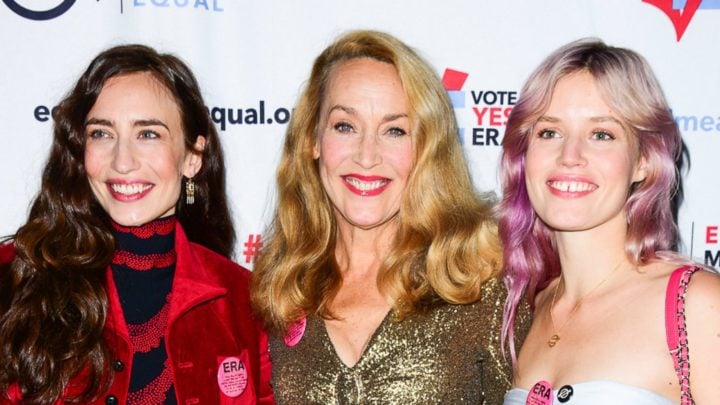 Jerry Hall posed with her daughters Elizabeth and Georgia- May Jagger. Source: Getty.

They’ve followed in their mother’s model footsteps in recent years and Jerry Hall’s daughters Elizabeth and Georgia-May Jagger looked the spitting image of her as they all made a rare outing together in New York.

Rupert Murdoch’s wife, 62, completely stole the show at the Equal Means Equal Campaign for Equal Rights event, shining out in a glittery gold dress that pinched in at the waist to show off her ageless figure.

Hall coupled the dress with some matching gold pumps and added more colour to her outfit with a touch of bright red lippy and a flower pinned to her chest.

She wore her hair in loose waves around her shoulders and looked in her element in front of the cameras as she flashed a huge smile alongside her daughters.

Georgia, who models for Chanel, opted for a pretty strapless powder blue dress that fell almost to her ankles and brightened it up with a vibrant pink bag which matched her dyed pink hair perfectly. Wearing black and silver heels, she towered next to her tall mum and sister.

Meanwhile, Elizabeth stood out in a black and red striped high-neck dress with a red jacket and strappy black heels.

The event was held to promote equal legal rights for American citizens, regardless of gender, and was organised by Elizabeth herself.

Georgia-May congratulated her sister on the event on Instagram, sharing photos of the trio together and writing: “So proud of my sister @lizzyjagger for putting on the incredible @equalmeansequal event last night. Most Americans believe we already have equal rights.

“Did you know women working full time, based on median annual full-time earnings, earn 78 cents to every dollar a man earns. We have one more state to win before we can have equal rights for all under the law in the United States. Support the Equal Rights amendment #equalmeansequal.”

So proud of my sister @lizzyjagger for putting on the incredible @equalmeansequal event last night. Most Americans believe we already have equal rights. We have one more state to win. Did you know women working full time, based on median annual full-time earnings, earn 78 cents to every dollar a man earns and African American women only make 64 cents, and Latina women only 54 cents to every dollar a man earns under the law in the United States. Support the Equal Rights amendment #equalmeansequal Thanks to all these ladies for hosting with me @theodorarichards @amysacco @parishilton @mashondatifrere @nataliewhiteforequalrights @juleswstylist_

Fans immediately complimented the three of them for their outfits, with one commenting: “Strong fam game,” while another added: “Fantastic! Well done beautiful women.”

And one wrote: “You are all beautiful women. As a women your mother’s age I also fought to not only equal pay, to get more. I was one of the highest paid employee (sic) at my job.”

It comes after an explosive three-part investigation by The New York Times shone a light on Hall’s media mogul husband Murdoch and his family, revealing details about his relationship with US President Donald Trump, the issue of succession within his media empire and the suspicion that allegedly surrounded his third wife Wendi Deng.

However, one of the most shocking claims to emerge from the investigation was that the 86-year-old almost died following an accident on his son Lachlan’s super yacht in January 2018.

According to The NY Times, the head of News Corp injured himself when he fell during a night time trip to the bathroom, whilst staying on the yacht with his fourth wife Hall, leaving him unable to move and having to be airlifted to hospital in Los Angeles.

Do you like their outfits? Are you a fan of Jerry Hall?