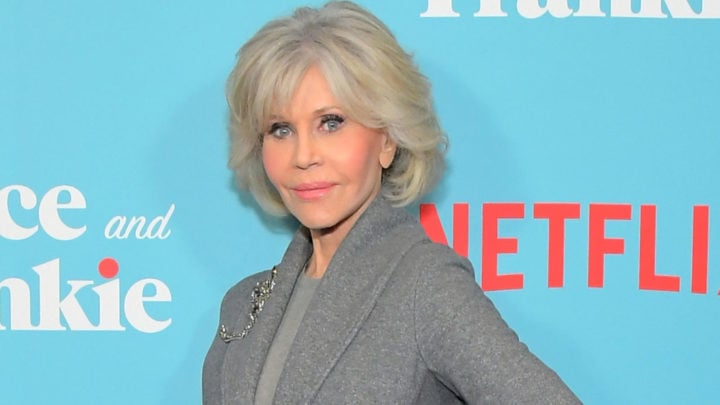 Jane Fonda debuted the style at a screening of her Netflix series Grace and Frankie. Source: Getty.

For as long as we can remember Jane Fonda has had blonde hair, with a few exceptions of course whenever a role required her to don a wig or break out the hair-dye, and a variety of shades along the way. But now it seems that the screen star may now be braving the transition to grey, as she showed off a seemingly new ‘do this week.

The 82-year-old looked chic as always as she stepped out for a special screening of hit Netflix series Grace and Frankie, which stars Fonda and Lily Tomlin as a pair of unlikely friends who are forced to live together after their husbands reveal they’ve fallen in love with each other.

But while Jane’s fashion choices were on point as always, her cropped hair appeared strikingly different as she seemed to have added fashionable silver tones to her hair.

Jane looked effortlessly stylish as she posed on the red carpet, wearing a tailored grey suit jacket and pants, which the Barbarella star wore over a simple grey sweater. She completed the look with a pair of understated grey heeled boots and the only sign of bling was an elaborate brooch that the actress and long-time activist had pinned to her right lapel.

Lily Tomlin, who plays hippy grandmother Frankie Bergstein in the hilarious series, also attended the screening in Los Angeles on Wednesday and the actress looked a far-cry from her on screen persona as she stepped out in an elegant all-black ensemble.

Lily, who also starred alongside Fonda in 1980’s 9 to 5, donned a classic pair of black slacks for the occasion, which she paired with a simple black blouse, a collarless black blazer, which featured a subtle check design, and a pair of pointed black boots with a stylish kitten heel.

While Lily also dressed up her outfit with a statement silver brooch, she also opted for a chunky necklace and bangle which added a touch of red-carpet glamour to her overall look.

The sixth season of Grace and Frankie will air on Netflix later this year, however it was recently confirmed that the show, which also stars Sam Waterston and Martin Sheen, will come to an end after season seven. The series follows Grace Hanson (Fonda) and Frankie Bergstein (Tomlin) as they come to terms with the fact that their husbands have been having an affair.

The first seasons sees Sol Bergstein (played by Waterston) and Robert Hanson (played by Sheen) breaking the news to their wives that they are in love with each other and plan to get married, leaving Grace and Frankie with no choice but no move in together in the beach house the couples share.

While Jane still acts regularly, she is arguably better known – at least by younger generations – for her political activism, having established ‘Fire Drill Fridays’ which sees the star,  along with other A-list celebrity guests including Martin Sheen, Sally Field and Joaquin Phoenix, hold demonstrations on Capitol Hill to raise awareness of climate change issues.

A statement written by Fonda on the Fire Drill Fridays website reads: ” will be on the Capitol every Friday, rain or shine, inspired and emboldened by the incredible movement our youth have created. I can no longer stand by and let our elected officials ignore – and even worse – empower – the industries that are destroying our planet for profit. We can not continue to stand for this.”

Are you a fan of Grace and Frankie? What do you think of Jane Fonda's new hair colour?