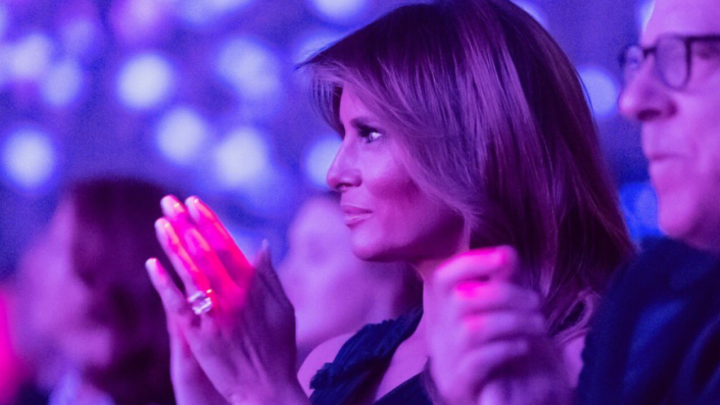 The First Lady attended the grand opening of the REACH on Thursday. Source: Twitter/FLOTUS.

Melania Trump may be best known for who her husband is, but the First Lady stepped out for a solo engagement this week, displaying her impeccable sense of style and sophistication as she took to the stage to deliver a public speech.

The mum-of-one oozed sophistication on Thursday evening as she made an official appearance at the John F. Kennedy Center for the Performing Arts in Washington DC. Melania was invited to speak at the event which was held to mark the opening of the REACH, a new welcome pavilion at the centre.

Melania looked every inch the public figure as she stepped out in a glamorous floor-length gown in a flattering shade of navy. She paired the dramatic dress – which cinched her in at the waist before flowing down to the floor elegantly thanks to its soft fabric – with understated jewellery and a pair of stiletto heels.

Letting the show-stopping frock do the talking, the former model wore her highlighted locks loose, and kept her make-up simple with a hint of blush on her cheeks and a lick of black eyeliner.

The 49-year-old, who has been married to President Donald Trump since 2005, shared several snaps from the evening on Twitter. Alongside the photographs, she wrote: “Honored to join the Kennedy Center last night in celebration of the grand opening of the REACH. This is an amazing investment in the arts and our next generation.”

As Honorary Chair to the Kennedy Center, she said in a statement, released via The White House: “This is a momentous occasion for the arts. The Kennedy Center has always been a powerful tool to bring people together.

“This new addition will be so valuable to Washington D.C. and is so important to our community and to our nation as a whole.

“I want to thank the Kennedy Center leadership and the generous supporters for inviting me to join them this evening and for the incredible work they are doing for our future generations.”

Honored to join the Kennedy Center @Kencen last night in celebration of the grand opening of the REACH. This is an amazing investment in the arts and our next generation. #KenCenREACH pic.twitter.com/mj0RhvslAj

Many supporters of Melania commented on the “amazing” work the First Lady carries out in her role as the President’s wife. One wrote: “Lady Melania, America loves you. Pay no attention to stupidity of liberals.”

Another said: “We have an astonishingly beautiful, intelligent and caring First Lady. Very proud.” While a third commented: “Very classy I am soooo grateful for our wonderful and very beautiful FLOTUS you rock.”

According to the Kennedy Center’s website, the REACH is the first major expansion to the building since it was constructed. The building is the United States’ National Cultural Center and was named in 1964 as a living memorial to the late President John F. Kennedy.

Speaking about the recent launch, the site reads: “The REACH breaks down boundaries between audience and art. The REACH provides visitors with the opportunity to fully interact and engage with the Center, transforming the campus from a traditional performing arts center into a living theater where the artist can be set free.” [sic]

What do you think of the First Lady's style? Do you think she dresses well?