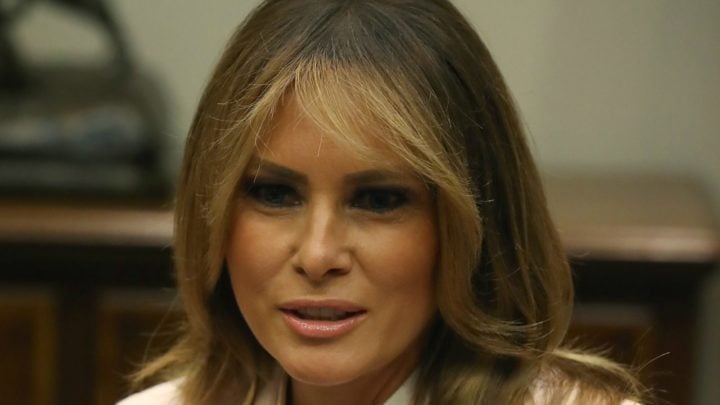 Melania Trump exuded confidence as she swapped her usual glamorous frocks for a classy pink power suit during a meeting at the White House this week.

The First Lady was glowing in the pale pink ensemble, which featured elegant trousers, a tailored jacket with gold buttons and a white shirt underneath.

Standing tall in classy white heels, the mum, 49, kept her gorgeous locks down in a slightly waved style as she greeted Poland’s President Andrzej Duda and his wife Agata Kornhauser-Duda alongside her husband President Donald Trump.

Meanwhile, Melania completed her look with a pale pink lip and a swipe of bronzer on her cheeks to highlight her beautiful features.

Agata looked stunning alongside her husband for the photograph, wearing a beautiful black and white frock which fitted in at the waist with a thin black belt.

Melania took to social media after their visit with a series of snaps of their time there. The four could be seen sitting down for discussions in the White House, with Melania and Agata also enjoying a drink together.

In the post on Twitter, the First Lady wrote: “Great to welcome back President Duda and Mrs Kornhauser-Duda of Poland at the @WhiteHouse today.”

Great to welcome back President Duda & Mrs. Kornhauser-Duda of Poland at the @WhiteHouse today! pic.twitter.com/A3UxqNUqzn

It has been a busy few weeks for the former model who travelled to France last week with her husband for a special D-Day commemoration ceremony.

The First Lady looked stunning as she arrived in Colleville-sur-Mer, Normandy, in northwestern France for the French-US ceremony in a gorgeous black coat-dress which fell to her knees.

Standing tall in black heels, the mother-of-one exuded glamour with her hair styled down and straight, while she donned a pair of black sunglasses to shade her eyes from the sun.

Melania entered the ceremony at the Normandy American Cemetery and Memorial alongside the French president’s wife Brigitte Macron, who looked equally as stunning in a white ensemble.

The 66-year-old went with her traditional style and opted for a formal white frock for the occasion which she paired with a long white coat with gold buttons.

Brigitte kept things simple yet elegant with black heels, while she chose her usual straight bob hairdo on the day which marked the 75th anniversary of the World War II Allied landings in Normandy.

The high profile women, along with their president husbands, paid tribute to the many service members who risked their lives to fight for their countries during World War II.

Are you a fan of Melania Trump? What do you think of her most recent outfit choice?