Who should replace Karl? Big names that could front Today in 2019 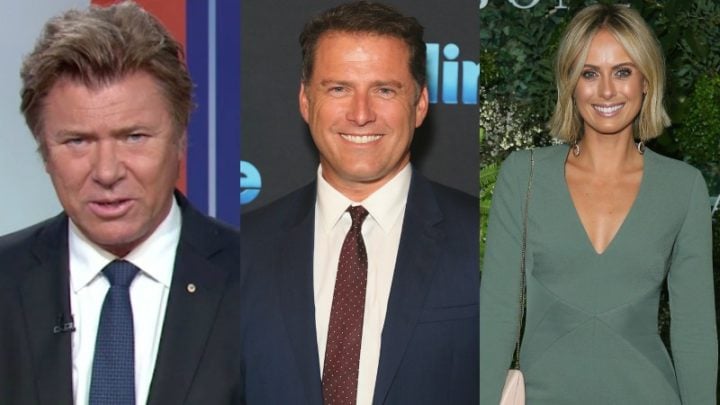 There is already talk some of Today's existing hosts including Richard Wilkins and Sylvia Jeffreys could be up for the job. Source: Getty/Twitter

Following the news that Karl Stefanovic will not be returning to Channel 9’s Today in 2019, fans of the show have been speculating who will be hosting the popular breakfast progam in the new year. At present, Deborah Knight and Brenton Ragless are hosting over the summer period, but Karl’s replacement is expected to be announced closer to the new year.

On Wednesday afternoon Nine released a statement saying the network and Karl has mutually agreed for the 44-year-old to “step off” the Today show after 14 years. And with Karl gone that leaves one of the most prominent seats on Australian TV empty.

There is already talk some of Today’s existing co-hosts including Richard Wilkins, Sylvia Jeffreys and Tim Gilbert could be up for the job.

Pizza for breakfast? Why not! 🍕 #9Today

Entertainment reporter Richard has been a staple of Today for some time — last year celebrating 30 years with Nine — travelling the world to interview big stars of film, television and music. In fact, he gave an emotional speech on Thursday’s episode of the show, after sharing the desk with Karl for more than a decade.

“Karl Stefanovic has been a co-host of this great show for 14 years and I’ve had the honour and pleasure, and pressure, sometimes of working alongside him almost every day over that time, and I can tell you from the heart that there is nobody who has worked harder for this show than Karl,” Richard said.

“He is a fantastic, intuitive and intelligent journalist. I describe him as an intoxicating mix of world’s best broadcaster and naughty schoolboy.”

After 14 years with the show, it's time to say goodbye to Karl. Thank you for waking up with TODAY, we'll miss you! ❤️ #9Today pic.twitter.com/BusjFC4mwi

Sylvia, who’s married to Karl’s brother Peter, has been a host on Today since replacing Georgie Gardner back in 2014 and has been a valuable member of the Nine team for over a decade.

Despite speculation surrounding Sylvia’s current job, Nine’s Director of News and Current Affairs, Darren Wick recently confirmed Sylvia “is a huge part of Nine’s plans for 2019 and beyond”.

“She is contracted with Nine until the end of 2020,” he said in a statement. Any reports or speculation that she is leaving Nine are incorrect. She is a gifted, hard-working journalist and presenter and we look forward to continuing to work with her.”

Meanwhile sports reporter Tim, who has been a Today presenter since 2014, is also considered an option to replace Karl.

Adelaide newsreader Brenton, who is filling in on the show this week, is also considered an option to replace Karl.

We’ve got the best beach-friendly tech for you this Summer! 🌞🌊 #9Today

Elsewhere there is talk former Studio 10 host Ita Buttrose could be up for job, as well as The Daily Edition host Tom Williams, who recently announced his resignation from the Seven Network.

Karl has had a turbulent last few years while working on the show, having split from his wife Cassandra Thorburn before going on to start a relationship with Jasmine Yarbrough. He tied the knot with his new wife just days ago in a luxury Mexico wedding, before jetting off on honeymoon together.

News of Karl’s departure came just a day after his brother Peter announced he had quit the Nine Network after more than 15 years with the news division. He made the surprise announcement on Tuesday evening, saying he valued his time at the company but had decided it was time to move on.

What are your thoughts? Who do you think should replace Karl Stefanovic in 2019?