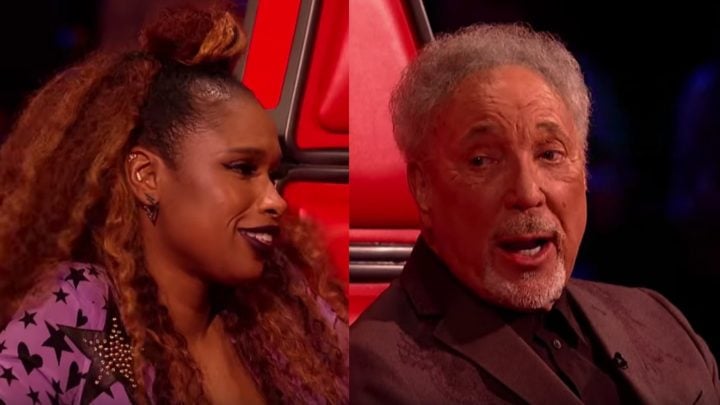 Tom Jones has been wowing fans over the last few weeks with a series of impromptu performances on UK talent show The Voice, but his latest rendition with singer Jennifer Hudson may be his best yet.

The 78-year-old musician is a judge on the hit show and watched on as each of the contestants performed in a battle with another of their competitors in the latest episode, for a chance of eventually winning the show.

But it was Jones’ surprise battle with Hudson that really blew viewers away as they performed a perfect duet of ‘This Is A Man’s World’ – leaving many people with goosebumps.

With Jones showing off his flawless vocals, Hudson showcased her incredible vocal range as she hit a series of top notes at the end of the song, bringing the crowd to their feet.

Shocked by the surprise performance, viewers at home rushed to congratulate the pair on Twitter with one writing: “The look of sheer joy on Olly and wills faces. A wonderful moment. X,” while another added: “Omg amazing …goosebumps.”

Meanwhile one wrote: “Blown away by that! I want to watch that again and again,” and another added: “Ohhhhhhhh…. whenever she opens her mouth… one note and I get CHILLS! Tom you compliment each other so well when you sing! Loved this so much!!”

Just as overwhelmed by Hudson’s performance at the end, Jones later tweeted: “It’s definitely NOT a man’s world… An honour @iamjhud.”

It’s just the latest amazing performance from Jones in recent weeks, and he previously wowed audiences yet again by dueting with a contestant. 28-year-old Bethzienna Williams got the surprise of her life after she wowed the crowd with her rendition of ‘Cry To Me’ by Solomon Burke during her audition at the end of January.

Clearly impressed, the 78-year-old wanted to know more about the singer and her interesting choice of song.

“How do you know that song?” he asked Williams. “It’s a great song. I love that. I sang that myself on stage. I sang it through the summer.”

Fellow judge Hudson wanted to hear her co-star sing it.

“C’mon, let us hear,” she pleaded, causing the audience to burst into applause.

“Do you mind if I sang it?” he asked the contestant, who was thrilled to share the moment with the music icon.

Jones was handed a microphone and it didn’t take long for him to work his magic. He began the song from his seat but truly getting into the spirit, he leapt up and joined the aspiring musician on stage.

Fellow judge Olly Murs burst out of his seat and started randomly dancing with a woman in the audience, as Hudson filmed the special moment on her phone.

Do you like Tom Jones’ latest performance with Jennifer Hudson?