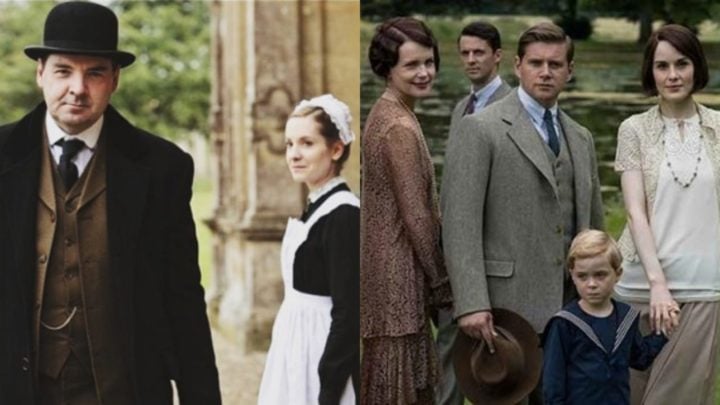 Downton Abbey released a never-before-seen family portrait in the lead up to the movie's release. Source: Instagram/jofroggatt and ITV

Downton Abbey fans were left in a state of excitement this week as they were treated to a never-before-seen photo in the lead up to the movie’s debut later this year.

Avid watchers of the historical drama were treated to a sneak peak of what’s in store when the film hits screens, as one of the show’s favourite families were pictured together for the very first time.

The adorable picture features much-loved couple Anna and John Bates posing with their young son, who was born during the final episode of the television series which aired in 2015. The boy was born in Lady Mary’s bedroom, and his name has not yet been revealed.

“They do say a mother’s love is the strongest love there is – Anna Bates,” the social media post read, which was shared in honour of Mother’s Day in the UK.

Actress Joanne Froggatt, who stars as ladies maid Anna, revealed earlier this year that her character is “in a really good place” when the movie picks up, believed to be around a year and a half after the ITV show came to an end.

Speaking to The Telegraph, the 38-year-old touched on the movie’s plot, explaining it is full of “romance surprises, sadness and intrigue”.

“Anna is in a really good place,” Joanne said. “She and Mr Bates have a baby boy, now 18 months. She is passionate about helping Lady Mary with the running of Downton, about keeping the legacy going.”

As well as the sweet photo of the family, a number of teaser posters have also been revealed to fans on social media.

Michelle Dockery, who plays Lady Mary Crawley in the hit series and upcoming movie, shared the images with fans on Instagram simply captioning the posts: “Welcome back to Downton”.

Welcome back to Downton. Only in theaters this September #DowntonAbbeyFilm

The four posters include Dockery as Lady Mary along with fellow characters Andrew Parker, Lady Edith Crawley and butler Thomas Barrow. The posts quickly received attention from fans who had been waiting in anticipation for an update on the movie.

“I have never been more excited for anything in my life, ever,” one person wrote on Instagram.

“Can’t wait to see it,” another said.

The latest posts follow the release of the movie’s trailer in December last year. The short video shows cameras slowly panning round the sprawling mansion revealing the memorable and elaborate furniture, before telling viewers they are “cordially invited to the motion picture event”.

From the bells in the servants quarters, to maids preparing the main bedrooms and even someone writing a private letter, there is a glimpse at some of the classic scenes being brought back to life.

And while the footage gives little away about the main plot of the film, it goes on to show vibrant moments as crowds line the streets waving Union Jack flags, as well as soldiers slowly walking down a road in formation.

Meanwhile, some of the servants are seen lining up outside to greet guests – appearing to be Mr Carson and Mrs Hughes as well as Bates, among others.

Did you watch the Downton Abbey series? Are you looking forward to seeing the movie?