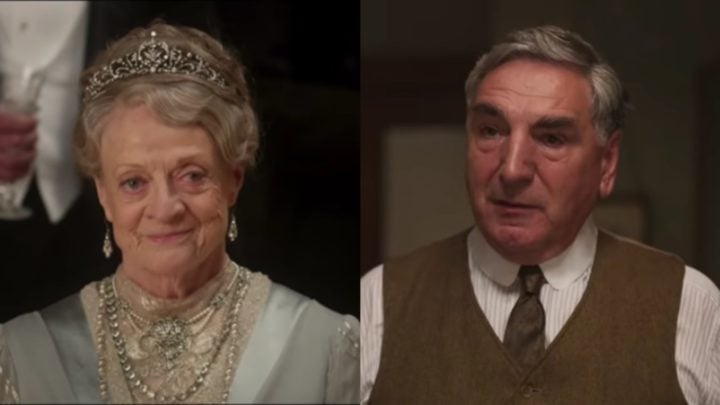 All the favourite characters return to the screen in the much-anticipated Downton Abbey movie. Source: YouTube/ Focus Features

Downton Abbey fans have been sitting on the edge of their seats for months waiting for the release of the movie’s full trailer and on Tuesday their wishes were finally granted.

The footage from the upcoming film spin-off of the hit TV series was shared online, revealing a glimpse at the Crawley family preparing for a royal visit, as well as big romances and plenty of drama.

With the iconic Downton music playing in the background, the sneak peak of the film – set for release later this year – shows glimpses of the storyline including the arrival of King George V and Queen Mary.

All the favourites return to the screen as the family and their servants get ready to welcome the royals into the estate. This includes retired head butler Carson who is asked by Lady Mary to return and help with the unexpected visit.

“I need your help Carson,” Lady Mary can be heard saying. To which Carson replies: “I’ll be there in the morning my lady, don’t you worry.”

Set in 1926 – one year after the final episode – the movie is expected to be an emotional rollercoaster picking up where the TV series left off.

There are grand balls, a secret kiss between Thomas Barrow – who came out as gay towards the end of the TV series – and a mystery man, Lady Edith’s return and even a bombshell from Lady Mary as she appears to hint she’s considering leaving the abbey behind for good.

You are cordially invited to return to Downton Abbey! Be the first to know about all things #DowntonAbbeyFilm. Sign up for reminders at https://t.co/ttfhioBOYR pic.twitter.com/nkAEKmoOBb

The trailer has been a hit with fans who were quick to comment on their excitement and anticipation to watch the movie in the coming months.

“One of the mots (sic) beautiful trailers I’ve seen,” one person wrote on YouTube. “The music, the scenery and of course our beloved characters.”

Another commented: “Omg the music. I’m feeling so nostalgic. Going to have to break out the boxsets,” while a third said: “I think my heart just skipped a beat, just amazing!”

They do say a mother's love is the strongest love there is. – Anna BatesHappy #MothersDay#DowntonAbbeyFilm

The latest glimpse of the movie follows the release of an adorable picture of one of the show’s favourite families earlier this year. The photo featured much-loved couple Anna and John Bates posing with their young son, who was born during the final episode of the television series which aired in 2015. The boy was born in Lady Mary’s bedroom, and his name has not yet been revealed.

“They do say a mother’s love is the strongest love there is – Anna Bates,” the social media post read, which was shared in honour of Mother’s Day in the UK.

Are you a fan of Downton Abbey? Are you looking forward to watching the movie?