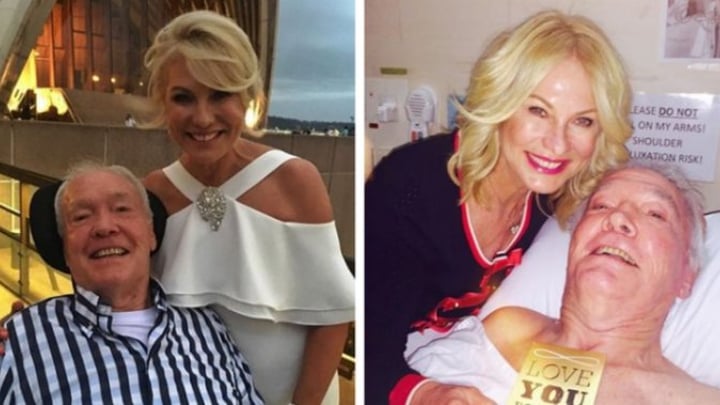 Kerri-Anne Kennerley has stood by her husband's side throughout. Source: Instagram/kerriannekennerley.

She became a full-time carer for her beloved husband John in a matter of hours, when a devastating accident left him almost completely paralysed and wheelchair-bound.

Now, Kerri-Anne Kennerley has bravely shared with Starts at 60 what caring for her spouse is really like, and slammed anyone who claims looking after a paraplegic or sick relative is anything but “awful” and “daunting”.

In a deeply honest interview, the Aussie TV star shared her advice for others becoming carers for a loved one, and said while it may feel impossible at times – and leave you “panicking” – there are ways to cope and piece life back together again.

“It’s daunting because everything is new. You don’t know the potential problems, issues, how to do things, but after a while with experience you get into a swing and it’s the new norm,” she said as she recalled the moment she was first told of her husband’s accident.

In May of 2016, the couple faced one of their toughest challenges when then-75-year-old John suffered severe spinal injuries after falling from a balcony at a golf course. Fracturing his C3 and C4 vertebrae, the courageous man was left an incomplete quadriplegic and bound to a wheelchair for the rest of his life.

What a year. Wishing you all a very safe & Happy New Year. 🍾🎉We are very grateful for the support all you have given to us this year and has not gone unnoticed. Much love to all 💕 #2017

Kerri-Anne has been widely praised for her honesty following John’s accident, previously admitting how hard it can be, and asked what she’d say to carers and people who claim their life is ‘easy’ following such a huge change, she said: “What idiot, what fool, would even dare to say ‘oh, my husband’s a quadriplegic, this is all good, isn’t this wonderful’. What rubbish.

“It is daunting, it is awful, but it is what it is. But once you take that deep breath, you accept that is it the new norm.

“I couldn’t believe that anyone could be so stupid as to try and pretend that having a catastrophic accident, or having a partner who has an issue, is anything but difficult. But it’s what you eventually adjust to.”

Of course it was even harder for John as he learned to adapt to his new life, and Kerri-Anne praised her husband’s incredible determination and strength of character for helping him through the toughest of times.

Merry Christmas Everyone 🎄shout out to all the firemen and woman out there around the country. 💕

“He is a remarkable person with an amazing strength of character, and depth of character, I always knew that,” she said. “In instances like this, people with real character show through.”

Sharing her own tips for people who have just had some awful news or are becoming carers for the first time, the TV favourite said she finds making lists and planning ahead helps her remain stress-free and relaxed.

Kerri-Anne also reiterated that it’s okay to ask for help, and urged people not to feel “embarrassed” for calling on a family member or friend to help out when they’re particularly busy, or a planned carer falls through.

“I’ve done that on a couple of weekend gigs. You can’t be embarrassed about accepting help. To be quite frank, for someone to come in for three or four hours, it’s not a big deal and most of the time they’re delighted to be able to help,” she added.

Asked what she’d tell those new carers when they’re starting out, she said: “Do it slowly, try not to panic, and do everything slowly.

All a girl could want for her birthday 🎈

“Keep writing everything down, with care there’s drugs, a routine every few hours, jobs to do, so writing down the routine for yourself and for carers is a great tool. And don’t drop the pills!”

While John’s condition will always remain a primary concern for the whole family, Kerri-Anne said it’s important to remember all other health aspects – and not let one health issue overshadow routine check-ups for anything from eyes to dermatology, for both the carer and the person they’re caring for.

“Most things don’t come with a warning. It doesn’t matter what anyone’s condition is, whatever health issues they’re going through, the rest of their body parts still work the same but need attention,” she insisted.

We have had a wonderful 32 years together. Can't wait until he comes home at the end of the year 💖

“Whoever you’re caring for, their body still needs attention in other areas. Eye health, whether it’s quadriplegia, dementia, strokes, you must have it attended to. They don’t go away, they just get worse, and then you’ll end up with a double problem if you don’t have them checked.

“When you have someone with an injury like John’s, you forget all the other things you’ve got to do. The body will function just the same, but there’s things like dermatologists, eye specialists, all these other body parts that you may forget about.”

Have you been through a similar experience to Kerri-Anne? Are you caring for a loved one and struggling?