Living like a local: Behind the walls of a 13th century Italian fortress 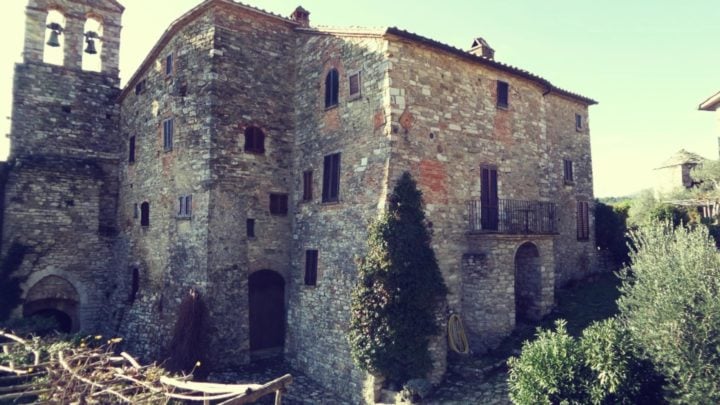 One of the main buildings at Santa Giuliana, Umbertide, Italy. Source: Village to Villa

Queensland couple Neil McLean and Gai Reid journeyed to Europe to enjoy some authentic travel, ‘living like locals’. The result? They spent 300 days pet and house-sitting their way across four countries, spending less than it would cost them to live at home. Plus they started a new business, Village to Villa! Here’s the next chapter in the fabulous account of their escapades…

During our time in the Umbrian Mountains we were lucky enough to meet many locals. Our hosts had introduced us to an amazingly engaging American by the name of Sheila Tabakoff. Sheila lives in a fortress, but not just any old fortress — this one had a history dating back to the 13th century!

Back in the 1970s, Sheila and others discovered an abandoned complex high on a hill overlooking the Tiber River outside the town of Umbertide in the province of Perugia in Central Italy. Castello Santa Giuliana was described as a “a pile of rocks” … “with potential”.

Sheila, a native of Chicago in the United States, first travelled to Italy as an 18-year-old to study the Italian language and art history and has been immersed ever since in everything Italian … The language, the food, the customs, the culture and the lifestyle.

Because the complex was abandoned (like hundreds of others across the country) they took up what we would call ‘squatter’s rights’ and decided the position and outlook was too good to pass up. A band of adventurous souls eager to have a go and fix the fortress enough to live in it.

According to Sheila, roofs were falling in, walls were shaky and piles of rocks lay strewn across the mountain top site. The fortress had been occupied, then abandoned many times over the centuries. Farmers, monks, armies and various other residents had resided there, however when Sheila and her friends ‘found’ the ancient buildings it had been vacant for decades.

Santa Giuliana was originally built in the 13th century as a look out across the Tiber Valley’s main route north. Lookouts would spot hostiles traipsing through the valley and send a messenger to alert the authorities in Perugia. It was a forward post.

Italy did not unify until 1870. Until then, there were many separate states, so Perugia was one of many going it alone. Places like Santa Giuliana were common back then, particularly on the top of mountains with strategic views to other valleys.

Sheila Tabakoff and her pals set about the huge task of making the fortress habitable. The first job was to secure the parts of the place that were falling down. Soon others joined the restoration and the complex was starting to regain some of its former glory. One of the crowning pieces of Santa Giuliana is the main tower. It stands regally on a corner of the complex with its high stone walls and bell tower. There were originally four of these, one on each corner.

Walking around the mountaintop fortress of Santa Giuliana, the views are almost overwhelming. One can see for miles in several directions, which would have proven very handy in the days where the main function of the building was as an early warning system.

The mountain ranges in this region stretch across many peaks and valleys. The weather events are quite spectacular too with sunrise and sunset a visual fiesta.

There are now more than a dozen families in what you would call a cooperative. There are individual cottages, apartments and free-standing houses. It’s certainly an international affair with British, American, Australian, Swedish and bunch of other nationalities residing here. They all agreed to guidelines to ensure the character of the original development is maintained.

Some of the individual homes/apartments are quite spectacular. There are a number of projects on the go all the time: building a little bridge across a stream, fixing a roof on a major building, securing one of the other towers in need of maintenance and the list goes on. Like all old buildings there is always something that needs doing, even if it is chopping a pile wood for the coming winter months.

When Gai and I were introduced to Sheila and shown around the fortress, we were mesmerised by its beauty, function and position.

After decades of living in Italy part-time, Sheila is now a full-time resident of the fortress. Out of the dozen or so families that have part ownership, the art history buff is the only permanent resident. The others come and go for holidays.

Fluent in Italian and engagingly eloquent, Sheila Tabakoff conducts small group tours of the local area and is a polished and knowledgeable guide on all things Italian. Visiting Santa Giuliana certainly gave us a strong taste of living like a local in Central Italy.

Does visiting historical buildings, such as medieval fortresses, appeal to you when travelling? What are some of the spectacular destinations you’ve visited while on tour?