‘Up and up: Hiking New South Wales’ Woolpack and Cathedral Rock loop’ 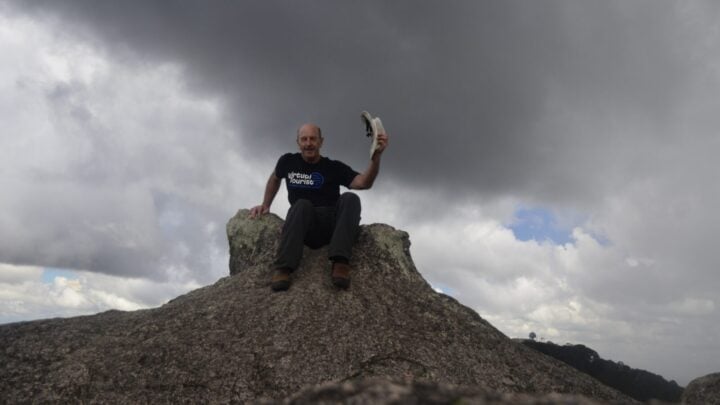 At the very top of Cathedral Rocks. Source: Ian Smith

It made a frightening noise; so frightening that I recall seemingly jumping nearly as high as where the branch had come from. How lucky was I that it was 50 metres (54 yards) behind me though the odds were definitely in my favour that it would miss me. Still, I couldn’t help but look back for the next half a kilometre, it was certainly unnerving. By now my legs were seriously tired and I had to concentrate on merely putting one foot after the other on what would normally be called an easy to moderate track.

Two days clambering over granite rock towers had drained my strength, though my exhaustion was tempered by the thought of having achieved my aims and maybe having shot a good picture or two.

Woolpack Rocks (near Ebor, New South Wales) had been easier than today; though, starting at 5am in darkness, the first time I’d ever done so, had been mentally draining. With a fisherman’s light on my head I’d walked beneath stars so clear they danced among the branches, flecking the sky with their brilliance. I’d put on a jumper but in no time at all it became luggage as I paced along in the humid air.

There was no stopping for sights and I found it hard to get used to the lack of noise. No kangaroos bounded into the scrub, no owls hooted, no wild dogs howled; it left me slightly on edge; if there had been a noise I would have jumped … but there was nothing.

After an hour I reached a point I remembered was below the outcrop, about a quarter of an hour from the top. That meant I’d walked blindly past the swamp I had expected to see en route but had arrived in plenty of time before the sun’s appearance. The faint predawn light beheld a stark silhouette above, that of some of the lower Woolpack outlines.

A sudden wind caressed the forest; at last there was some noise and yet, when I finally reached the top, I also saw what it had brought. Above me rolled ten-tenths cloud; all thoughts of a photo of a starry sky outlining the outcrop disappeared.

Though disappointed, I moved on with my thoughts and figured it would give me time to explore the area. The main body of rocks are only about 250m (273 yards) away in a direct line so I started off. There were many potential leads; nice smooth surfaces that invariably rolled over to gaps in the rocks where a small line of trees had taken root in the limited soil. There were more impassable routes than achievable ones and it was around an hour later before I reached a point where further progress would have needed ropes and rock climbers and there was certainly no way to the top.

Then I turned around and the first of the sun’s rays that had broken the clouds lit up an outcrop at the end of a long chute behind the largest of the entire Woolpack cluster. I clambered and stumbled across fallen shards of granite that littered the abyss until I broke out onto an area unseen from the normal viewpoint.

I had part access to the rear of the great rock and got to see others I’d probably never encounter again. It gave me a great feeling of achievement; at least I’d seen something new, something few others would have bothered to try for but, who could blame them? Clambering beneath resting boulders and scaling others hadn’t been for the fainthearted and required a patience sometimes lost in this fast world we live in.

I retreated, back to the ‘Walk Ends Here’ sign, and pondered its appropriateness as I sat down. I tarried awhile beside the sign, soaking up the atmosphere, sucking a lolly and emptying my bidon. A calmness overcame me and I was at peace with the world; a peace disturbed only when a creature emerged from a low overhang. I was stunned, I’d never seen one before, but it was instantly recognisable.

The tiger quoll sniffed the air, looked in my direction, then eased sideways into another crevice. Frustratingly, I got five shots off but only one was in focus due to a faulty lens that I’d been considering replacing. Still, I had finally got to see this normally nocturnal creature in daylight.

Somewhat satisfied, I packed my gear and headed back to Native Dog campground, being mildly surprised at what I’d passed unseen that very morning. A Kiwi came by and warned me about a snake he’d seen. Somehow, these days, I was only mildly interested, thinking more about getting a picture than any physical pain I might have to endure.

It was that after lunching with a friend I ended up camping at Wollomombi that night, too tired to push on to Cathedral Rocks, happy to stay in familiar territory. By the time I rallied enough energy to walk over to the lookout the next morning the clouds were just starting to build, hopefully to release some precipitation for the falls were a forlorn sight; not a skerrick of water tumbled from the heights of one of Australia’s greatest waterfalls.

I had morning tea and pushed on to Cathedral Rocks; there were two vehicles already in attendance. The loop was just over 6 kilometres (3.7 miles), rated medium and a time of 2.75 hours.

You initially pass through swamps before gently moving upward and then you start to come across quite a few steps at regular intervals. After just over an hour you come to an intersection with an offshoot to the summit. This side trail is not included in the ‘medium’ section; in fact, it doesn’t really rate a mention until you’re at the intersection.

Obviously I hadn’t come all this way to not scale the heights but this outcrop can fairly be described in one word — daunting! The massive boulders tower into the sky, reaching heights that seem improbable from your lowly position with little indication of route … and it gets steep as access zigzags along the improbable trail to the top.

I passed a couple from Redcliffe (in Queensland) I’d camped next to at Native Dog two days before and they said they’d reached as far as the chain. Well, he had, but his wife hadn’t even got that far. “Where’s the chain?” I asked.

Turns out it wasn’t all that far from the top but they advised me to leave most of my gear behind. For once, I took someone’s advice and dumped all but my camera about 100m (109 yards) before the chain. Life was so much easier without my load as I gazed at the amazing route across a huge rock indicated by the markers and chain and climbed onward. Suddenly the air was rent by a stark crackle that reverberated around the granite; it was thunder but the crisp sound was unlike any that I’d ever heard before, an octave or two above the usual and it was disconcerting to say the least.

Finally I could see the end; it was a throne-like remnant where I imagined thousands had had their photos taken and soon I would join them. Overhead, threatening clouds were drifting towards me and I had no ambition to be the victim of a lightning strike so I hastily retreated to another area where I had some chance of shelter.

Crawling around the unknown I found some untracked places and a comfortable spot in shelter as the rain finally fell and made a mini-waterfall off the granite above. You sort of assume it’s going to finish soon without knowing for sure. This time it did and I scampered off the high points back to the intersection and turned right for the motor home. It wasn’t that long after when the branch missed me.

Looking for angles to shoot the heights I’m constantly surprised at just how far you can go up and down in a relatively short time while walking. Mind you, my legs weren’t surprised and my gratitude at seeing the motor home and knowing the relief therein was palpable.

There was a middle aged couple from Nowra just refreshing themselves and he got to tell me that when he’d sat on the ‘throne’ up top he’d been bitten by a wasp. I immediately thanked him for removing that danger from my life.

They told me they’d just finished walking to Woolpack and back, which was just over double what I’d just done. Again I felt inadequate but reflected that there were many 67 year olds who hadn’t been here today; in fact, I was the only one I knew of, though when I drove down to nearby Ebor Falls and collapsed for a couple of hours, frankly, I couldn’t have cared less.

Do you enjoy hiking on your travels? Would you venture on a hike of this nature?