‘Portugal: Navigating bad smells and hopeless transport was worth it in the end’ 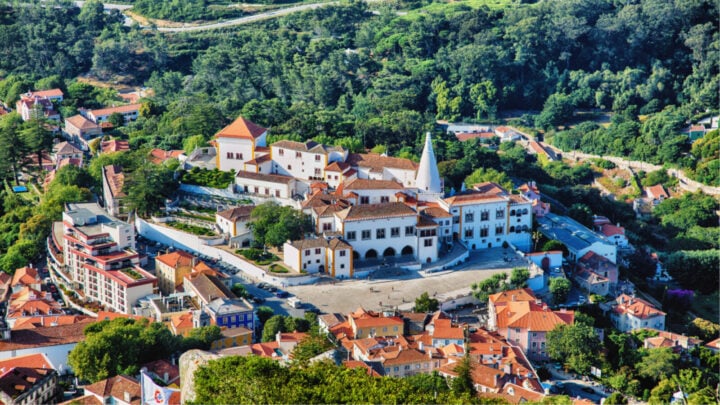 Sintra, Portugal. I’d done the research and it all came up with positives so we got directions from our host in Lisbon and headed off, Entre Campo our initial destination. This is one of the stations en route to Sintra and was the beginning of a journey that really opened our eyes. At least here they had a ticketing system and we boarded our train and set off through the suburbs of Lisbon.

Oh, what a reality check that turned out to be. For mile after mile it was so reminiscent of the housing blocks in Eastern Europe decades ago. High-rise apartments with intermittent items of clothing strung out on makeshift lines and why all the paint used in endless graffiti couldn’t be better utilised making the housing look better I don’t know. Lorraine remarked that “graffiti reflects the wellness of society”.

There were unpleasant odours to be had in many areas, the train being one of them. Some cheap chemical had been used to partly, but not entirely, remove the offensive aroma. Flaky or non-existent paint seemed the norm in some suburbs and all this was such a contrast to a man on the train with a small stylish personal mirror who spent the entire time of his journey picking hairs out of his face one by one with a pair of tweezers.

We hoped for better when we finally arrived at Sintra and joined a queue for the bus. At least here we could buy tickets for the bus before we boarded. Or so we thought. No, what we had actually bought were two tickets to the attractions, which didn’t include the bus fares. We had to buy them off the driver and, of course, you couldn’t buy them until the bus arrived.

We didn’t know it at the time but the buses are scheduled to run every 20 minutes. When we were waiting two arrived simultaneously. Later, while eating, we noticed that three arrived within 30 seconds of each other and then a gap of nearly an hour before another turned up by which time more than a busload had accrued at each stop.

We bailed out at the village centre and went for a walk up the steep streets lined with shops clearly geared to the tourist market and nothing else. The cobbles and narrowness of the streets are accented dramatically when a car tries to drive along one, scattering people every which way. Some cars end up having to stop right where they are and later reverse out, something fraught with difficulties we Aussie drivers could only have nightmares about.

Our first viewing was at the National Palace with its Gaudi-esque sculptures attached to the outside walls. However, if there is one piece of architecture in this building you can’t avoid seeing it’s the massive chimneys at one end and we’re curious to know just where they were in the structure of things. Meanwhile, despite pre-paying for our tickets, we still have to queue but it’s not that long and soon we’re in an edifice that was used extensively by the nobility between the 15th and 19th centuries.

As you enter the hall of the swans, so named because on the ceiling are more than 20 paintings of swans set inside ornate octagonal painted frames, you’re aware that it’s something special. It’s an impressive opening to what started out as a Moorish palace in the 11th century and was adapted to Portuguese tastes after they conquered the Moors. It still retains much of the original design, particularly notable in the garden layout, surmounted arches and glazed tiles. The paintings, tapestries and ornate writing desks with multiple rows of drawers so obviously belong to later periods.

The other notable thing was the crowd. It compared to my recent visits to the British Museum and National Gallery in London as we constantly tried to move between the many tour groups from the buses. The palace is a multi-level dwelling and it was hard to work out which room was what, but the one place that left no doubt was the kitchen with its massive chimneys. We’ve never seen anything quite like them and the spacious area around the preparation tables makes it obvious that many people worked here and numerous were the dishes that left these walls.

We were getting hungry ourselves and wondered to the Café Paris across the road. We wanted to sit outside and watch the world go by but it was fairly crowded so we somewhat reluctantly headed indoors and saw what an error everyone had made by not going indoors. Here the décor was very tasteful; white tablecloths, chandeliers, quarter-length mirrors and painted cornices all added to a special aura while we sat right beside a window with full view over the street but without the noise.

It was so touristy outside it was almost nauseating and I was taken by the assorted motorized vehicles that people had salvaged in order to attract tourists to ride in them. There was a Citroen 2CV with a sun roof and Rossi’s racing number (46) and name emblazoned on the door; an ancient Renault ute; an UMM 4WD (something I didn’t know existed) floated by – it’s a discontinued line of Portuguese vehicles – and a dune buggy, a ubiquitous Tuk-tuk and who knows what else; all calculated to successfully suck in the tourist wanting that little bit more from their experience.

We went out to catch our hop-on, hop-off bus and waited for ages before one arrived and we finally climbed the slopes to Pena Palace, which means feather place. The variety of architectural styles should offend the eye but somehow it all works, as do the seemingly garish combination of colours, from Tuscany red and yellow to sombre blue to grey and lemon-beige, it all blends in somehow and leads you into a magical mystery tour of one of the world’s great castles, albeit built upon an older chapel site created from where King Manuel I purportedly saw Vasco da Gama’s fleet returning up the Tagus River.

It is to Ferdinand II, consort to Maria II and later king when their first son was born, that we owe this building, as much as German architect Baron Wilhelm Ludwig von Eschwege. It was started in 1840 but wasn’t finished until 1885, the year the artistic Ferdinand died. Just four years later it was purchased by the State, fell into disrepair after the 1910 revolution but has since been fully restored to the wonder it once was.

Gothic, Manueline, Renaissance and a lot of Mudejar style can all be noted in this unforgettable building that climbs over exposed rocks and has panoramic views from all the battlements and castellated walkways that jut out in every direction.

Inside is just as convoluted with a variety of styling. I’m taken by the 16th C alabaster and black limestone French altar that is left over from the monastic period, unlike any of the genre that I’ve seen before and there’s a Julius Caesar room with a 16th C Flemish tapestry of the Roman ruler himself that hangs from floor to ceiling.

However, there’s a lot more to see within, so why don’t you drop in and have a look.

Have you ever visited Sintra?