‘Is this Australia’s best outback town? Longreach is a grey nomad’s must-do’ 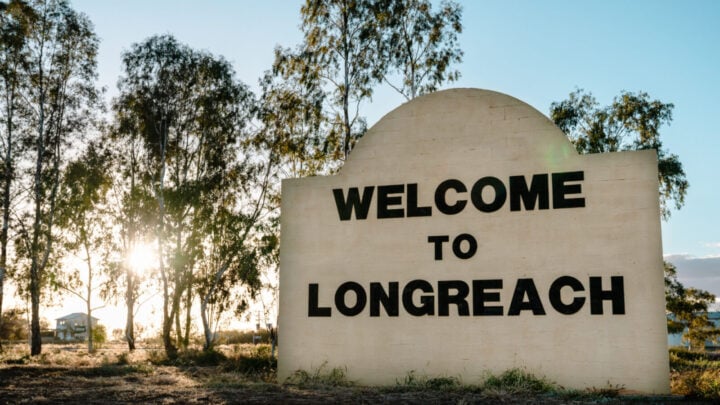 Kick back and soak up all that Longreach, Queensland, has to offer. Source: Tourism and Events Queensland

After two nights in Winton, it was time to continue our outback exploration in Longreach.

Although I had heard of the Australian Stockman’s Hall of Fame, opened by Queen Elizabeth II in 1988, I was unprepared for the size of this unique museum constructed in timber, stone and the quintessentially Australian corrugated iron.

Whatever you do, allow yourself adequate time to thoroughly explore and enjoy this tribute to the people of the Australian outback. The themed galleries tell the Australian story from the arrival of the Aboriginal people 50,000 years ago through to the technology that plays a role in today’s modern farming practices.

As you walk around the galleries, you can see the everyday and unique items that are part of our history. There are touch screens and audiovisual displays galore, plus displays of old tools, saddlery and sentimental items such as a baby’s bonnet and pair of ladies gloves. I have to say that these items struck a chord with me. Can you imagine living in the outback and somehow managing to preserve a pair of cream leather gloves in used but good condition? I also wondered how many little heads had worn the delicate bonnet.

I was fascinated by the people, the pioneer pastoralists, indigenous people, stockmen and unsung heroes who are the characters of our past. If you are interested in learning about some of these pioneers, there is an ebook available, Unsung Heroes: Stories from the Australian Stockman’s Hall of Fame by Michael Winkler, which is a treasury of personal histories.

Currently, The Australian Stockman’s Hall of Fame is undergoing a massive renovation and will reopen in April 2021, although the cafe, cinema and souvenir shop remain open. I wonder what more can be added to make the experience even better than it was on my visit.

With the sounds and sights of outback pioneers still in my head, our next stop was a pioneering icon of a different ilk. The Qantas Founders Museum is a not-for-profit organisation dedicated to telling the story of Qantas from its founding on November 16, 1920, through to the current day. What a fascinating place!

A highlight of the museum, for me, is the opportunity to hear history told in the voices of people such as legendary aviator Nancy Bird, Qantas founder Sir Hudson Fysh’s daughter and numerous Qantas employees from many generations. One display guaranteed to please anyone with a feel for fashion and how it changes is that of Barbie and her friends dressed in various Qantas uniforms.

For the more adventurous among us, the highlight of the Qantas Founders Museum is a tour of a number of aircraft used by the airline over the years, which comes with the opportunity to walk on the wing of a 747 Jumbo Jet, fully harnessed of course! Now one thing that really stops me in my tracks is stairs, so I wished my friends well and sent them on their way. In the meantime, I stayed in the museum proper and had the great pleasure of walking around the exhibitions and learning the history of the airline.

That evening, we returned to the Qantas Founders Museum for a magnificent light show, Luminescent Longreach, played out on the bodies of the aircraft my friends visited earlier in the day. The juxtaposition of light show, music and spoken word is such a delight, make sure you book for it when you visit the museum.

After the show we returned to our accomodation for the night at the spectacular Mitchell Grass Retreat where we were treated to a BBQ dinner under the stars outside the communal tent, which has dining, lounging and cooking facilities. Somehow, a meal under the stars tastes different to the same meal eaten indoors.

Many long years ago, when the world was younger and so was I, a group decided to go camping one Easter and foolishly I joined them. Never again! But now I’ve experienced ‘glamping’ in a solo tent at the Mitchell Grass Retreat. What a revelation!

A fantastic experience under canvas; the bed was king-size with numerous soft pillows, high-quality linen and a doona. Bedside tables were equipped with lamps and at the end of the bed was a comfortable couch with cushions. A small well-equipped kitchen and sitting area completed the main area. Outside was a deck complete with seating and a fire pit, stacked with wood, to toast the marshmallows provided. The bathroom would easily grace a five-star hotel with a deep bath, separate shower and good-quality toiletries.

Imagine this – laying back in a comfortable bed, looking over the Mitchell Grass plains, listening to the silence broken occasionally by the call of a bird, seeing millions of stars. If life under canvas was always this luxurious, I’d be glamping every weekend.

Have you been to Longreach? What's your favourite outback town?