Incredible Morocco: The Royal Cities of Meknès and Rabat 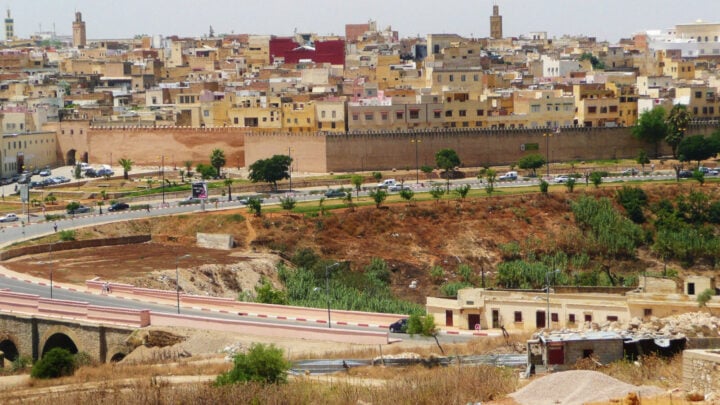 Liz shows us through the inspiring streets of Meknès and Rabat. Source: Liz Sier

Meknès is one of the four Imperial cities of Morocco, yet it does not receive the same amount of tourism as other cities, being much smaller and quieter. It was founded in the 11th century, and became capital of Morocco under Sultan Moulay Ismail, one of Morocco’s most powerful rulers, in the 17th century. The importance of the city at that time is shown in the 45 kilometre of exterior walls, 20 gates and over 50 palaces, together with the Sultan’s enormous royal stables, a military academy, vast granaries and an elaborate water storage cistern.

Meknès is made up of the old UNESCO World Heritage Site medina and the new ville nouvelle; two distinct centres about 3km apart. However, that ancient labyrinth of narrow streets with its wonderful Moorish architecture and a multitude of craft workshops and stalls selling everything from food and spices to furniture and carpets was what we had come to explore.

Our accommodation here was in the Riad Yacout on Place Lalla Aouda, a former Royal Guard parade ground, now redeveloped into a community space with gardens and fountains. From the roof terrace we had a great view over it to one of the city’s huge walls, with the minaret of Lalla Aouda Mosque behind. From there was only a short walk to most of the sights we had looked forward to seeing. The riad itself was quite grand with the customary central courtyard complete with ornamental pool and a restaurant in one of the rooms to one side. It also had an attractive roof-top terrace for relaxing and taking in the views, and a Hammam which, unfortunately, we did not have time to use.

Bab Mansour is one of the enormous gates that mark the entrance to the old city through the fortified walls. This one is by far the most impressive and the most famous, resplendent in green and blue zellij and towering columns. The gate is no longer an access point, but the interior of the bab is used to house art exhibitions. There is a smaller gate to enter in order to go into the markets of the medina.

Bab Mansour faces onto Place El-Hedim, the main square in the old part of the city. Here cafes, restaurants and produce stalls border the edges. While it is relatively quiet during the hot summer days, when we returned in the evening we found people had flocked to the square to eat, socialise and take in the performing acts – jugglers, musicians, story-tellers and snake charmers.

Place El-Hedim was created during the construction of Moulay Ismail’s Royal Palace – Dar El Makhzen – which is nearby, as a place to store construction materials. It also became the place for public executions under his rule. The palace itself is not open to visitors as it is still used on occasion by the current ruler of Morocco, Mohammed VI. On one side of the palace walls is the Royal Golf Club of Meknès, a nine hole course set with lush gardens and with the walls, roofs and minarets of the medina as a background. It even has lights for night games. Unfortunately hubby did not get to play there as the day we were there it was not open.

Near the palace we were taken to see the old ruins of the Heri es Souani granary and stables which were used by the royal household. The Royal Stables must have been an amazing site, constructed to house no less that 12,000 royal horses. Water from the cisterns below was channelled through the stables constantly, while granaries constructed with thick walls and natural air-conditioning from the water allowed ideal storage for grain for the horse feed.

Another of Sultan Moulay Ismail’s construction projects was his Mausoleum. The entry gate has beautifully carved plaster work and wooden portico, with huge doors that have smaller ones for easier access. A series of pale-yellow courtyards lead to the sanctuary – completely renovated in the 1950s by King Mohammed V – in which the sultan was buried. The anteroom to the tomb has walls with a series of levels consisting of exquisite zellij, enamel-painted wood, elaborately carved plaster, graceful arches, and marble columns. We were able to look through the doorway to the tomb, but non-Muslims are not allowed to enter.

The same restriction is on the Grand Mosque, but the Bou Inania Medersa is open to non-Muslims. This religious school was constructed at the same time as the one of the same name in Fes, in the 14th century. The building is centred around a single courtyard decorated in stucco finely detailed with carved calligraphy, carved olive wood, and a zellij floor.

One of the handicrafts of Meknès is the production of damascene ornaments and tableware. The process involves etching the design lightly with a stylus-like tool on the steel surface of the chosen object. Silver wire is laid within the rough edges raised by the chasing or etching. This burr is then worked down to hold the inlay, forming a delicate and intricate pattern against the contrasting black background. Imagine our surprise to find a large figurine of a creature that resembled a kangaroo!

After a couple of hours on the road next day, we reached Rabat, another Imperial city, the capital city of Morocco and its second largest city. Located on the Atlantic Ocean at the mouth of the river Bou Regreg, it is one of four Imperial cities of Morocco, and contains several World Heritage Sites. One of the most popular tourist sites is on the southern side of the estuary, where several important historical attractions are located.

The Hassan Tower is the incomplete minaret of an incomplete mosque, both intended to be the biggest in the world when construction began in 1199. In order for the muezzin to get to the top for the call to prayer, the tower was designed with ramps so a horse could be used. Royal horse guards stand at attention at the entrance to the complex. All that remains of the original mosque is some crumbling walls and many marble columns. Nearby the Hassan Tower, on the esplanade, another attraction is the Mausoleum of Mohammed V, containing the tombs of the Moroccan king and his two sons, late King Hassan II and Prince Abdallah.

Further south along the river we entered Chellah, a medieval, fortified, Muslim necropolis. Once a Carthaginian and later a Roman port before the extensive silting of the river, the ruined city was rebuilt during the 12th century and added to in the 14th century to include a Muslim sanctuary complex of mosque, minaret, and royal tombs, some of which can still be found. The tall minaret of the now-ruined mosque can still be seen with its storks’ nest atop. Roman ruins include a forum, a triumphal arch, a Temple of Jupiter and a craftsmen’s quarter.

Near the mouth of the estuary is the World Heritage site of the Kasbah of the Oudaias, built in the 12th century, but abandoned some 50 years later. This was the original fortress (ribat) that gave Rabat its name. Beyond the huge gate and fortified walls we walked through a pretty community of white-washed and blue-painted houses which are a photographer’s delight. We stopped for a while to admire the views across the estuary mouth to the beach of the conurbation, Salé, and the huge cemetery outside the city walls on the other side.

Then it was time to move on as we had yet to reach Casablanca for our hotel for the night. We had tried to find a traditional riad to stay in, but ended up in a multi-storey hotel, the Oum Palace, just a stone’s throw from the medina. Unfortunately we didn’t get to see it till the evening, so photos were not successful. We were also rather disappointed by it in comparison to the one in Fès, or maybe just tired after a day of travel and sightseeing, so we retired to the bar of one of the modern 5 star hotels nearby where it was possible to relax in style and be served an alcoholic drink, for a change. We determined to come back one day to see the city in more detail.

Next stop, the sights and sounds of Marrakech, somewhere I had been yearning to visit for years. This would be the most exciting city on our road trip, three hours’ drive away.

Have you visited Morocco?