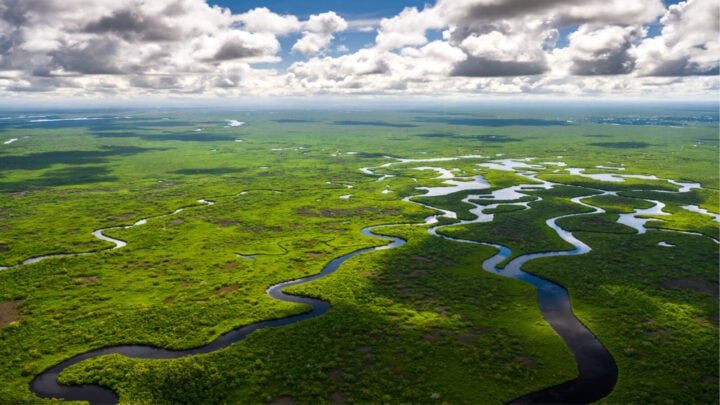 Coming off a cruise to the Western Caribbean and doing a back-to-back with another to the Southern Caribbean, we found ourselves at Fort Lauderdale with half a day to kill. The term everglades had always held a fascination for me as I imagined it as a swampy, dangerous place full of alligators and other fearsome animals. So it was that we embarked upon a four-hour shore excursion to the Florida Everglades. When we reached the Everglades Holiday Park we were boarded flat-bottomed airboats that could travel fast over shallow water and even swampy grass areas.

The park covers 29 acres of wetland. These are primarily open grassland swamps with not so many trees as the everglades in Louisiana.

However, the Spanish Moss-covered trees did look pretty spooky all the same.

The boats took us along waterways where alligators and various wetland birds are usually seen. We even stopped at one point where a relatively tame bird climbed aboard and performed for his regular treats from the driver.

There were not many alligators visible on the day we went, unfortunately. Nevertheless, the Gator Pit had lots for us to see – big fat lazy ones and little ones we were able to hold (with their jaws safely strapped closed). The Gator Show is really a means of teaching the public about alligators and the philosophy of conservation and preservation behind the centre. The alligators are apparently rescued from areas in Florida where they would be a danger to themselves or to humans, and brought to the centre for eventual release back to the wetlands.

One of the gator boys there did an impressive demonstration of how to wrangle a gator and even put the gator’s snout under his chin and let go with his hands. I’m surprised the gator did not whip around and bite him! Apparently the gator’s jaw muscles are pretty good for snapping closed, but not so good at opening, so it was meant to be relatively safe. I wouldn’t try that with the Australian crocodiles though! They are much more aggressive and much bigger too! There’s no way anyone would put that routine in a crocodile demonstration in the Northern Territory.

After the show I took the opportunity for a few selfies with this little chap.

Have you ever visited the Florida Everglades?