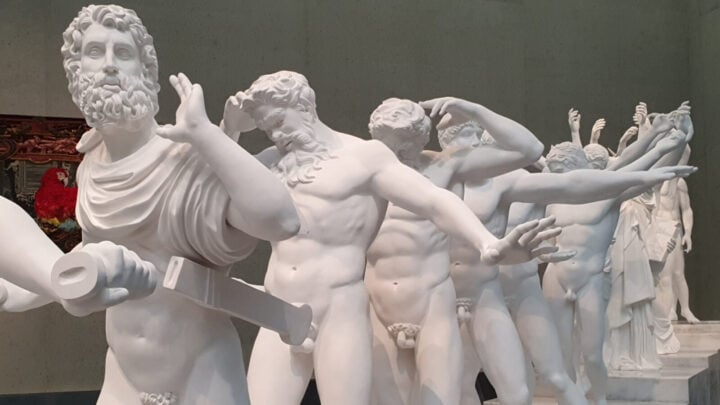 A fallen and malleable Corinthian-style pillar – that looks as though it may have once graced Greece’s Parthenon – suddenly moves, just when you’d least expect it! Snake like, it seems to follow you as you walk through Canberra’s National Gallery. Its title is ‘Hello’, by artist Xu Zhen. As Friedrich Nietzsche once remarked, “If you stare into the abyss, eventually it will stare back at you.”

But I found Zhen’s ‘Hello’ quite benign compared with his ‘Calm’. Imagine a rectangular pile of builders’ rubble. You walk past it, merely glancing at something that seems meaningless, but then it heaves up and down – likely making you feel a little queasy!

The National Gallery in Canberra doesn’t shirk controversy. ‘Blue Poles’ by American artist Jackson Pollock tells us that, and Zhen, who is one of China’s most significant artists and activists, certainly adds to this genre. In the gallery’s script, “His recent work centres on sculptural installations, video and performances that challenge cultural assumptions, question social taboos and comment on the idea of art as a commodity.”

I thoroughly enjoyed his work, particularly the classic sculptures lined up on a slightly inclining surface. Titled ‘European Thousand-Armed Classical Sculpture’ (2014), it takes you from antiquity to the Statue of Liberty (twice, both left and right handed). It’s very eye-catching and thought-provoking.

The main feature during my visit this time, however, was the exhibition ‘Know My Name: Australian Women Artists 1900 to Now’. With more than 300 works by 170 artists on display – drawn from the National Gallery’s collection and loans from across Australia – it is the most comprehensive presentation of art by women assembled in this country to date. It’s unlikely you’ll soak it all up in one viewing, but the exhibition runs until July 4 this year.

‘Know My Name’ spans a broad spectrum of genres, across more than 100 years. It includes moving pictures of someone, er, moving (that frankly left me feeling lost), as well as Anne Ferran’s imaginative and attention-grabbing series ‘Scenes on the Death of Nature’, and a self-portrait by Nora Heysen, who was the first woman to win the Archibald Prize (1938).

There’s also Grace Cossington-Smith’s ‘Interior in Yellow’ and eX de Medici’s seminal (and huge) work ‘The Wreckers’, which is purportedly depicting the crash of capitalism. Indigenous art of high quality is also on display, and who could ignore the Tjanpi Desert Weavers’ ‘Seven Sisters’ – the large woven figures standing around in the middle of a room? From nudes to Impressionism, the exhibit really has it all. It’s one of the better ones I’ve seen at the National Gallery.

There are, of course, so many more pieces across a broad spectrum. The architecture of the spacious gallery itself is worth a look as well, not to mention the outside works – mainly sculptures – scattered around various sites, which both greet and farewell you.

Have you seen any of these pieces? Which ones did you love?