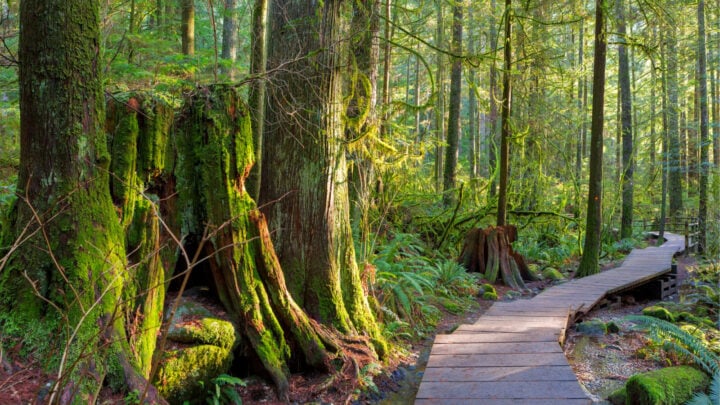 Ian takes us on a tour through Vancouver's stunning Lynn Canyon. Source: Getty

To be honest, my brain was in a bit of a fog. For over five weeks we’d seen a plethora of wonders, so much of which was breathtaking, that my mind had ground to a halt.

Aware that I had to do something, anything, I concluded that I had to go across the bridge, the one to the far side. Over there in Vancouver north were mountains and forest, stuff I felt at home in. I also wanted an easy day in somewhere less popular; that was how Lynn Canyon cropped up.

So it was I crossed the Second Narrows Bridge, aka the Ironworkers Memorial Bridge, and found myself in the ‘other’ part of Vancouver, cruising along in what was to be my last day in the Toyota.

Then, I still find it hard to believe, I thought I took the correct turn towards Lynn after noticing a small sign and working out instantly that it was probably where I should go, though when I reached the area of possible carparks, I had to pull up and go and check out an information hut that fortunately had the right info. I say fortunately because it was deserted initially and I was scrounging around when a helpful staff member returned, probably from a comfort stop I mused.

Turns out I had arrived at the Lower Seymour Conservation Reserve; turns out it was also a good starting point though the main access to Lynn is from the other side of the river.

Then I was on my way, having opted to do the Thirty Foot Pool and the Twin Falls. The secondary growth Douglas Fir and Western Red Cedars have excluded much light from the forest floor, leaving moss laden remnants and a fungus or two. It exuded an almost eerie calm as I barely managed a stroll, wallowing in the serene delights of an almost mature woodland.

Now stairways intervened, those of a downward direction. Consulting my map it appeared I was on my way to the advertised pool. The echo of water coursing rapidly through a chute reverberated off a rock wall somewhere and, as I neared said sound, the gorgeous swimming hole favoured by Vancouverites came into view.

The limpid waters disclosed a mass of rounded pebbles while behind, a maple turning yellow was reflected in the surface, surrounded on either side by evergreens. Off to the right was where the noise was coming from, a tempting little canyon that, on another day, I would have chanced my arm to get closer to.

I returned to the trail, whose route now approximated the river’s and it seemed in no time at all I was at the semi-famous suspension bridge. I say semi because Capilano Bridge is renowned world-wide and featured on many an internet site whereas the one at Lynn is known mainly amongst the locals but has an added feature – it’s free. There once was a charge for J.P. Crawford’s suspension bridge when the park was opened in 1912. It was also one of the few remnants when three days of torrential rain ripped through and the picnic grounds, the bandstand and the caretaker’s cottage all disappearing into the raging waters.

I eavesdropped as someone compared it to Capilano that he’d done the day before. He remarked that though Capilano was longer, this was more in your face as you were much closer to the falls and you got a sense of anxiety as they crashed beneath you.

On the other side was heaven in the form of a cafe; two stories of log cabin with who-knows-what on offer. I salivated to the point where I noticed the problem – Closed. A picture-perfect day on the first week in October and it’s closed?

My thoughts of a mug of hot chocolate and a row of tantalizing desserts dissipated as I moved away down the opposite side of the river, ever downward, this time to the Twin Falls Bridge and here the creek was really aggressive with cascades everywhere.

In 1989, the District of North Vancouver decided to open up a new suburb, 1.900 land units, right in the area of the forest because the original park was only 10 hectares. Luckily, 1,200 protesters turned up and the powers that be suddenly thought it might not be such a good idea after all and the park was expanded instead to 250 hectares.

Turning now, it was time for the up part of the journey, reflecting on nice moments as I traipsed through the mostly pencil straight vegetation that splayed shadows across the forest floor. Douglas Firs, these ones 100 years old, lorded over western hemlock and western red cedar. Though there are people doing the walk, they are scarce, as most come to experience the swinging bridge and falls. Few venture to where I’m currently hiking.

Flecking through the gaps in the trees are flashes of autumn, tempting colourful morsels that await me on the drive home. However, just down from my car there is another bridge, that of the local water body and aptly named the Pipeline Bridge as it was probably put there to service the adjacent pipeline. Another big drop to the water is beneath and I dwell here for some minutes imagining this might be my last plunging stream for some time. I imagine right, in two months since I’ve seen nothing of its ilk.
I felt fortunate to have been tipped off about this special place by a local, seeing a Vancouver wonder that few tourists get to see.

Have you been to Lynn Canyon?