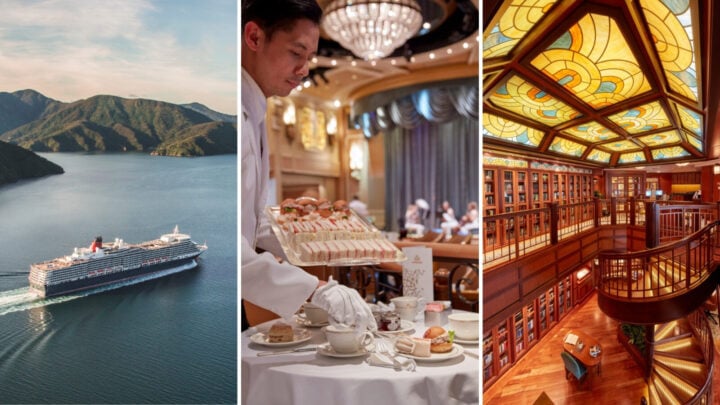 Prepare yourself for a truly remarkable voyage aboard the Queen Elizabeth. Image source: Supplied

The wait is almost over! It’s time to get excited about cruising again, and where better to start than with an indulgent experience on Queen Elizabeth.

Widely assumed to be named after Her Majesty The Queen (but actually named after the original RMS Queen Elizabeth ship, named in turn after the late Queen Mother), this ship captures the romance of the sea with gala evenings, art deco décor and white-glove service that will take you back to the heydays of cruising.

Travel at 60 has Australian and international departure cruises available for Queen Elizabeth with a varied list of departure destinations. Take your pick from the Whitsunday islands, Melbourne, Hobart or Fremantle, or head off for a tropical getaway in Fiji. Those looking for longer cruises will find their fix with a 34-night Barcelona to Mebourne or a 41-night Mediterranean to Melbourne cruise. Does it get any better?

Carrying over 2,000 guests over 12 decks and 911 crew members making your every wish come true, the 90,900 tonne Queen Elizabeth offers a truly royal experience. From the very first moment you step into the three-deck-high lobby with its grand staircase, you’ll be amazed by its grace and art deco elegance.

Christened by Queen Elizabeth in October 2010, this ship is quintessentially British and proudly displays strong links to the royal family. A portrait of Queen Elizabeth II is a highlight of the grand lobby. You can indulge in British treats such as afternoon tea or a game of croquet. However, there are also plenty of modern activities, including whirlpools and karaoke, along with a computer centre.

This is a cruise where you can really frock up! The Gala Evenings are a cruise highlight and generate much excitement. It’s like a scene from a glamourous 1920s Hollywood movie when guests emerge from their rooms to reveal their evening wear glory. From ball gowns to tuxedos, there is plenty to amaze and admire.

An indulgent hour of Afternoon Tea served by white-gloved waiters

Every day at 3.30 pm, white-gloved waiters serve Afternoon Tea in the Queen’s Room which was modelled on Queen Victoria’s ballroom at Osbourne House, her Isle of Wight summer residence. Styled as a classically British special occasion with freshly cut cucumber sandwiches, just-baked scones and moreish pastries. While the orchestra plays in the background, you’ll be sipping on fine leaf tea, Twinnings, of course!

Check the Daily Program which is your go-to list for all the daily activities and entertainment available every evening on your cruise. You can dance, watch a show, or relax with live music. You won’t want to miss the dazzling singers & dancers when they stage their fabulous West End-style productions or abridged Shakespeare performances in the three-tier, 850-seat Royal Court Theatre. It draws its design from London’s Palladium in West End and even has private boxes! There is a talented line-up of vocalists and instrumentalists, illusionists and aerial performers, variety of entertainers and stand-up comedians to keep you entertained.

Book a Queens Grill Suite, and with a personal butler and concierge for your cruise, you will really embrace the royal experience. These rooms come with extra luxuries such as velour robes and slippers, champagne and chocolates on arrival, your own coffee machine, and a fully stocked bar so you can enjoy drinks on your balcony. Priority embarkation and disembarkation are among the extra touches that will make this an exceptional cruise for you.

Take your tastebuds on an adventure and book yourself in for dinner at The Verandah. If you have a yearning for smokehouse flavours, authentic Asian or Indian tastes or traditional Italian flavours, head to the Lido restaurant. Otherwise, there are four restaurants that are assigned to passengers according to their stateroom category – the Queens Grill, Princess Grill, Britannia Club and Britannia Restaurant.

Work off your calories with a stroll around the Level 3 promenade deck, then relax on a deck chair to enjoy the view.

Live music drifting around every corner

From harpists and pianists to string trios and contemporary bands, Queen Elizabeth is filled with music drifting around every corner. It’s a memorable signature of this ship and provides a warm welcome in lounges and public areas around the ship.

Wine experience: for all the wine connoisseurs

You might start your Queen Elizabeth cruise as a wine lover and end it as a wine connoisseur by enriching your knowledge through the lectures and tastings from the wine experts onboard. Enjoy one of the special wine dinners where wine producers will pair wines with a lavish tasting menu. There is a collection of fine wine packages carefully curated by the ship’s sommeliers. More pairing recommendations are only a phone call away, thanks to the ‘Wine Line’.

There is cruising and then there is travelling like royalty on Queen Elizabeth. Just choose your dream destination with Travel at 60 and hop on board.

New season cruises for 2023/24 are on sale now, and if you want to cruise sooner, there are plenty of last-minute cruises to choose from, too — including a grand circumnavigation all around the Australian mainland, departing either Sydney or Fremantle.

Book now to secure your preferred cabin so you don’t miss out.

Have you cruised on Queen Elizabeth before?