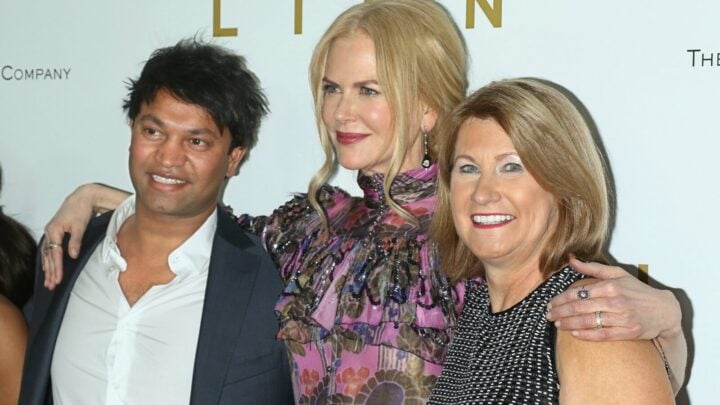 Sue Brierley never thought her family’s story would be played out on the big screen. Sue and her husband John lived quite an ordinary life in Hobart, Tasmania, with their two adoptive sons Saroo and Mantosh. They ran a small family business while trying to navigate the many challenges that come with parenthood. But little did they know years down the track their eldest son Saroo would track down his biological mother and write an autobiography, which would not only go on to become a major motion picture and see them walk the red carpet at the Oscars but change their lives forever.

In short, Lion, which is based on Saroo’s book A Long Way Home, tells the story of how Saroo became lost at the age of five in India, was subsequently adopted by Sue and John and, at the age of 30, tracked down his birth mother using Google Earth.

Now, speaking in an exclusive chat with Starts at 60, Sue, 66, who recently published an autobiography detailing her own traumatic childhood and how it shaped her view of motherhood and adoption, has opened up on seeing her life played out on the big screen and having Aussie golden girl Nicole Kidman, who has adopted two children herself, play her, revealing she has nothing but praise for the actress.

“[Nicole] was a perfect choice,” she says. “I mean what Australian woman wouldn’t be happy to have Nicole Kidman play your character. And she really is a gorgeous person. She’s a very natural, normal mother and of course, she has adopted children as well.”

Sue says Nicole did a stellar job when it came to her performance, but reckons the directors and costume designers could’ve made her look a bit more glamorous.

“It wasn’t exactly a fun role to be playing, it was a tough role for her, a very sensitive topic and I think, you know she did a fabulous job,” she says. “I would’ve liked her to look [more] glamorous, beautiful and young. Through the whole period of time when things might have been bad for me, I never looked like that. I’ve always kept up with being current in my appearance.”

The mother-of-two also revealed the pair spent quite a bit of time together during the filming of the movie, and still keep in touch today.

“I haven’t heard from her probably for about two months, but she’s always been supportive,” she says, revealing she was in contact with the actress while writing her book. “She’d [say] ‘don’t worry Sue it will be fine’.

Sue also opened up on how she felt watching the film for the first time, revealing that, because they had very little input in the process and were only shown snippets here and there, “it was a huge shock”. According to Sue’s book, she and John entered an almost trance-like state as the first few scenes appeared, revealing that the final scene which shows Saroo’s biological mother Fatima embracing her on-screen left her and John a sobbing mess. The second time she watched it, however, Sue revealed it left her memorised.

“Lion was an amazing film,” she says. “I’m very proud of it because it does give an opportunity for people to explore their deeper emotions and thoughts about a topic of family and love.”

The heartfelt drama became an Australian box office success, receiving six nominations at the Oscars and claiming 12 awards at the Australia Academy of Cinema and Television Arts (AACTA) Awards in 2017.

Have you watched the movie 'Lion'? Who would you like to play you in a movie?