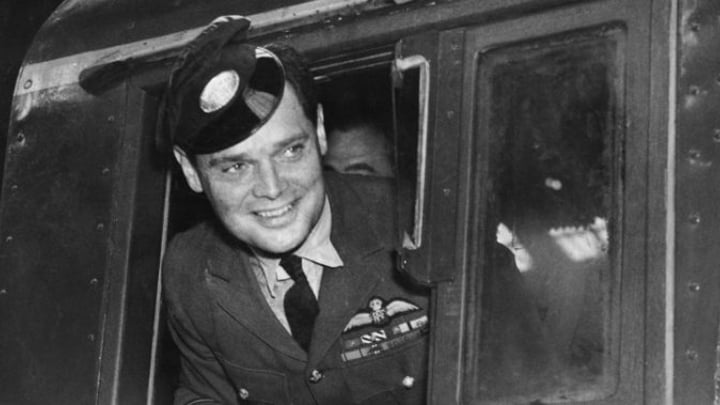 Sir Douglas Bader is one of the greatest heroes from the Second World War, credited with not only 22 aerial victories and four shared victories, but for also inspiring a generation.

He was also known as ‘the legless fighter pilot’ after losing both his legs when his Bulldog fighter crashed during an aerobatic display in the 1930s. Although he passed away at the age of 72 in 1982, his legend lives on.

A funny story of the Air Force great has gone viral again on social media. Originally shared in a newspaper on the 35th anniversary of his death on September 5, 2017, a man known as Grant Tucker shared his fondest memory of Bader.

“Today marks the 35th anniversary of the death of Sir Douglas Bader and I couldn’t let it pass without this story about the RAF hero,” Tucker wrote. “He was giving a talk at an upmarket girl’s school about his time as a piolet in the Second World War.

“’So there were two of the f***ers behind me, three f***ers to my right, another f***er on the left,’ he told the audience. The headmistress went pale and interjected: ‘Ladies, the Fokker was a German aircraft.’ Sir Douglas replied: ‘That may be madam, but these f***ers were in Messerschmitts’.”

It was his personality and sense of humour that made Bader relatable around the world. After losing both his legs, he became somewhat of a hero for both disabled and able-bodied people during his lifetime.

Read more: World War 2 as you’ve never seen it before

He was honoured with a Knighthood in 1976 for his continued work within the disabled community. A charity was set up in his name following his death, The Douglas Bader Foundation, which aims to replicate the work Bader did when he was alive. In fact, it helps promote the physical, mental and spiritual welfare of people who are born without or have lost one or more limbs, or those who are otherwise physically disabled.

Meanwhile, a biography about the Group Captain, Reach for the Sky, became one of the best-selling hardback books in post-war Britain. The book was eventually turned into a film in 1956, where actor Kenneth More appeared as Bader. There are also various buildings and roads around the world named after the war hero.

At one point in time, Bader even toyed with the idea of running for prime minister. His controversial opinions around everything from immigration, the death penalty and gambling divided the public and he never made it to politics.

What do you think? Do you remember Douglas Bader? Were you a fan of him?