The behind the scenes drama of 1974’s ‘The Towering Inferno’ 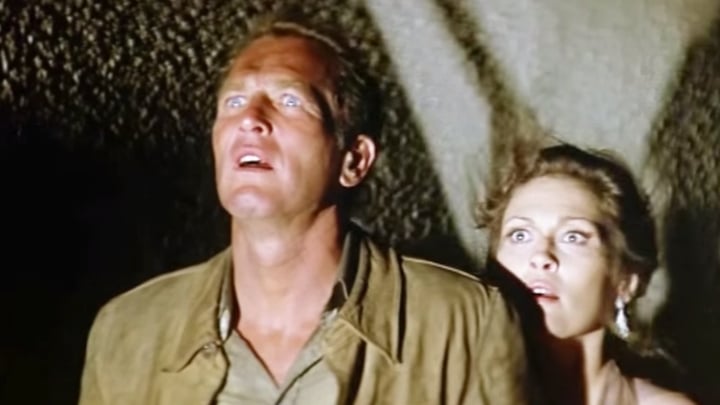 In the early 70s, disaster films were the most sought after productions in Hollywood after the massive success of 1972’s The Poseidon Adventure. Two books were in the middle of a bidding war with every studio trying to get the rights to The Glass Inferno by Thomas N. Scortia and Frank M. Robinson as well as The Tower by Richard Martin Stern.

The Glass Inferno was purchased by Warner Brothers for $390,000, and The Tower was bought by 20th Century Fox just eight weeks later. This forced the studios into a first for Hollywood as they joined forces to make one movie instead of making the gamble to release two simular movies at the same time. The deal was Fox would get the US Box Office, and Warners would get the Worldwide Box Office. Considering that The Towering Inferno was the biggest film of 1974 it was the right decision.

The production of the movie almost turned out to be a bigger disaster than the one in the film as studios squabbled, actor’s egos clashed, and very real accidents almost resulted in production being stopped. This film even caused superstar actor Steve McQueen to take a hiatus from acting for four years after production.

On paper having the star-studded cast of Steve McQueen, Paul Newman, William Holden, Faye Dunaway, Jennifer Jones, Fred Astaire, and Robert Vaughn would have brought smiles to a director’s face. However, the clashing of egos between McQueen, Newman, and Holden caused more headaches than anything. Both McQueen and Newman were adamant about having the same number of lines to put them on equal footing, but the strategic finesse of McQueen chose to play the fire chief because that character wouldn’t be introduced until 46 minutes into the movie meaning that he would dominate Newman in the scenes they had together. Holden, who was a huge star himself, insisted on having top billing but years of diminishing star power meant that he would always be behind McQueen and Newman, and that didn’t sit well with Holden.

Faye Dunaway also caused her fair share of the onset drama as she was constantly late and sometimes didn’t appear at all for days she was set to film. This was seen as unprofessional and disrespectful to veteran actors Holden and Jones. Once Faye did show her face, it was reported by actor Ernie F. Orsatti, that Holden shoved Faye against a wall and threatened her. Whether this happened or not is unknown, but Faye has a flawless attendance record for the rest of filming. There must not have been any ill feelings as Faye worked with Holden again in the 1976 classic Network.

McQueen did prove to be just as heroic onset as he was in the movie coming to the rescue during two different accidents. When a real fire broke out on set McQueen rushed to help firefighters put out the blaze. After it was out and the firefighter’s realised it was McQueen helped them he stated “My wife is not going to believe this,” and McQueen quickly quipped “Neither is mine.”

The star also came to the rescue of special effects crewman Gary King when one of the mammoth water hoses broke and threatened to hit cameras and lights. Gary quickly attempted to wrestle the hose to stop the water, and cast and crew watched on as Gary fought a losing battle. It wasn’t until McQueen dived in to help that they were able to get it under control. McQueen then had his wardrobe people give Gary some of McQueen’s clothes to get him dry. Proving to be a leading man in film and life.

It was the behind the scenes drama and onscreen action that made The Towering Inferno the classic that it is today.

What did you think when you first saw the film? Have you watched it again recently? Who was the better leading man, McQueen or Newman?