A trip down memory lane! Favourite sweets from the 1950s 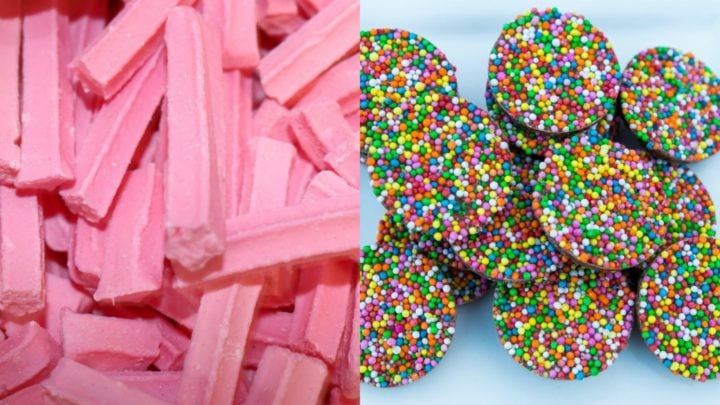 Musk sticks and Freckles are just some of the favourite lollies enjoyed by Aussies in the 1950s. Source: Getty

A trip to the corner store to purchase a packet of Fantales or handful of Freckles was a treat for Baby Boomers growing up, with the sweet scents of sugar and chocolate luring them towards the lolly aisle.

It was a big decision picking a treat for the week or a special trip to the movies, with so many delicious lollies and chocolates to choose from. For some over-60s, many of their best memories of their childhood involve sweet treats, not just for their taste, but the fun involved in eating them.

“Musk sticks could be twisted on your tongue into a sharp point and used to stab your mate,” cultural historian and University of Queensland guest lecturer Toni Risson told The Sydney Morning Herald. “As little girls, we used a saliva-soaked red kelly bean as a lipstick. We carefully tore lolly wrappers to see who ended up with the longest continuous strip. Cobbers were my favourite sweet, only a cent when I was little, and I’d nibble the chocolate off the sides and then suck on the hard caramel in the middle very gently so it lasted half an hour.”

Over the years lollies have changed, with new options always popping up on supermarket shelves, with the likes of Moon Rocks and Warheads popular options for kids in the ’80s and ’90s. But thankfully, some of the old favourite from the 1950s still remain.

The semi-soft stick of fondant has a peculiar floral taste, the texture is chalky and it has a strong perfume scent. For Aussies, the musk stick was and still is a much-loved sweet treat, but unfortunately others across the world don’t agree.

In fact, in 2018 they were included in Sweden’s Disgusting Food Museum, alongside other Australian delicacies such as Vegemite. But back in the 1950s, it was a fan favourite in Aussie lolly shops and on corner store shelves.

It seems Australians don’t want them to disappear any time soon, with Woolworths apparently selling around 24 million musk sticks each year, the ABC reports. Meanwhile, when Coles stopped selling them in 2015, it received an influx of complaints and had to rush to put them back on shelves.

Want a tasty treat and some celebrity trivia? Fantales have it all! The chocolate-covered caramels were created by Sweetacres in 1930 and quickly became a favourite Aussie snack, often enjoyed on a trip to the movies.

Nowadays, the lollies are created by Nestle – but you’ll still find fan tales on the wrappers – brief biographies about movie stars such as Hugh Jackman and Nicole Kidman.

From its crumbly honeycomb centre to the delicious milk chocolate outing, Violet Crumble has been a favourite treat for many years. It’s similar in taste and texture to Cadbury’s Crunchie bar, but what makes it iconic is that it’s Australian made.

The Violet Crumble was first made in 1913 in a Melbourne factory and soon become an Aussie favourite, with its purple and gold packaging and the slogan ‘It’s the way it shatters that matters’. However, sadly production of the chocolate bar moved overseas in 1972 after it was purchased by British company Rowntree, and later bought by Nestle in 1989.

Thankfully though in 2018, after 46 years of overseas production, Robern Menz, owner of confectionary company Menz, signed an agreement with Nestle to acquire the Violet Crumble brand and soon after the chocolatey treat was being made in Adelaide.

Aniseed Rings may not be the first choice for kids nowadays due to the strong flavour, but for Baby Boomers, they were considered a real treat when they were growing up. Traditionally, aniseed was used as a treatment for indigestion and other digestive issues, but the liquorice flavour wasn’t deemed all that tasty for many so some sugar had to be added.

The aniseed coated in chocolate – either milk or dark – and the liquorice flavour wasn’t quite as intense. Although they aren’t everyone’s favourite, Aniseed Rings have stood the test of time and can still be purchased in lolly shops and supermarkets today.

Chocolate and hundreds-and-thousands — what’s not to like? Freckles were originally created in 1955 by Nestle and have remained on supermarket shelves ever since. The mixture of creamy chocolate and sprinkles had kids rushing to the corner store for an afternoon treat. Over the years they have remained a strong favourite, and in 2018 Allen’s turned the sweet treat into a block of chocolate.

What was your favourite sweet growing up?