Cruising together: The ups and downs of our 16 day cruise 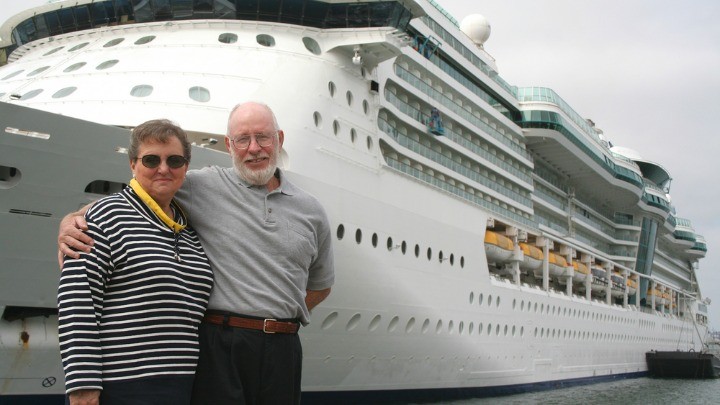 We did it: 16 days from Singapore to Brisbane with P&O. We visited six ports and we had lots and lots of sea days in an attempt to see if we could bear it, as we are planning yet another cruise in February and as this one will be with some friends we wanted to be sure that we could do it!

This was a very Australian experience. 99.9 per cent of the passengers were Australian (mostly from Queensland) and of course none of the crew were! In the crew there were a couple of New Zealanders, but most came from India, the Philippines and other emerging economies. I hasten to add that they were all marvellous, and added greatly to the value of the cruise.

Our first revelation was that most of our fellow cruisers were very experienced sailors! Most had been to between 20 – 40 previous cruises, and one game sailor we met had done over 100! The common theme amongst them all was that the cruise that we were all sharing was one of the worst they had been on! Oh yes, we spent many a happy hour with our fellow holidaymakers complaining about the short comings of the current adventure.

Now what was the main problem? Our main complaint was that there was rather too many add-ons that you were expected to pay for, including room service, and cups of hot chocolate. We were assured that these were usually free on other cruises. The shore tours were very expensive, and it was quite funny really to think that we had happily shelled our hundreds of dollars for very ordinary shore tours, and were upset about the $4 cost of a cup of cappuccino!

The other issue was the entertainment available on board. I must mention here that the average age was probably about 75! There were some younger families and children on board, but unless you went up to the pool area they were largely invisible. Anyway the entertainment crew on board had obviously equated age with dumb. There was a lot of bingo and karaoke. Such was the incipient boredom of long days at sea that I have to admit to being an ardent karaoke follower, although not a singer. I do draw the line at bingo! I am also no fan of pokie machines, which were located in the only warm entertainment area on the ship. The intelligent lectures provided were few and far between, and there was an awful lot of energy put into trying to sell us all very expensive spa treatments. The evening entertainment was too short, although mostly of good quality, and there was on board a very good little pop band who played the Beatles very well! This of course fitted well into the age group.

The main problem though was air conditioning. Despite us sailing through the tropics, the two main entertainment areas on the ship were freezing! We got into the habit of carrying a jumper with us all the time, despite the fact that the minute we walked outside my hair frizzed up with the heat and the humidity. Perhaps as a result of this the ship rapidly turned into a plague ship.  Every day more people got sick with a hacking cough and flu! I am not sure of the mortality rate, but considering the age and condition of the passengers I doubt if we all made it to Brisbane!

So what was good about the cruise? Our cabin was comfortable and spacious. Food was on offer mostly free, and at most times, although here too there were gaps in the 24 hours when you couldn’t get free food and to be honest the quality of the food although not bad, was also not fantastic! There was a lack of variety in the free restaurants although there was no ban on the amount you took!

The main entertainment on the ship was sitting and chatting to our fellow passengers which was a lot of fun. Indeed despite the litany of complaints that I have listed above one breakfast we sat with a lady who was fulfilling her lifetime dream of being on a cruise, which considering her socio-economic status had always seemed to her to be out of reach. She was loving every minute of everything, and it did put me back in my box for a while and I probably didn’t complain about anything else that day!

And so the verdict? We had a great time. Yes I know I have complained a lot, and yes it could have been better in many ways, but basically you pay for what you get. P&O is the cheapest cruise line and their ships are 3 star. The other lines are 4 or 5 star, BUT you pay a lot more for the cruise. Will I cruise again? Absolutely! Would I go P&O again? Probably, although I would definitely check out the other lines first, depending on where I wanted to go.

Have you been on a cruise recently or ever before?