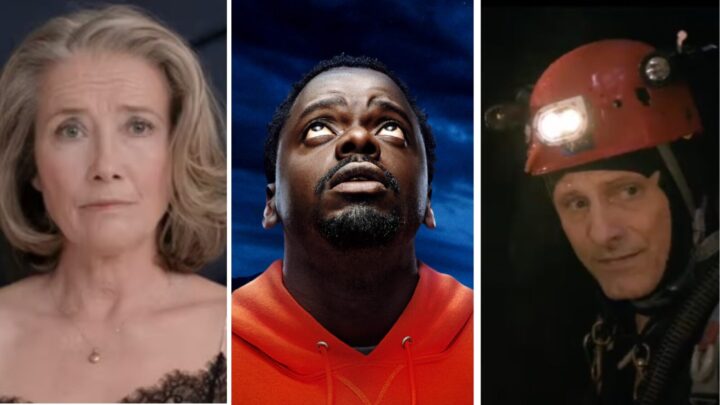 Oh, dear. Films about our encounters with aliens are usually filled with mystery, fear, and wonder. Not so with Nope, a much-hyped sci-fi fizzer written & directed without much flair, imagination, or originality by the overrated Jordan Peele.

The owners of a financially strapped horse ranch find themselves being harassed by a giant vapourous extra-terrestrial presence that hides in a large stationary cloud from which it swoops down at regular intervals to kick up dust, disrupt the electricity, and frighten the fillies.

Despite an obviously big budget and some nice visual effects work, Nope is an uninspired bore that moves at a snail’s pace and has gaping story holes that render the whole shebang nonsensical. Given that it also features the most uninteresting alien in film history don’t be surprised if you find yourself nodding off.

In the wordy, well-intentioned sex comedy Good Luck to You, Leo Grande a sexually repressed 63-year-old woman (Emma Thompson) hires an attractive young sex worker (Daryl McCormack) to help her explore the thrills her recently departed husband neglected to provide for many decades.

During their hotel room appointments, the pair spend most of their time talking, canvassing many unquestionably important topics – sexual freedom; a woman’s right to pleasure; marital doldrums – before eventually getting down to it.

Sounds like fun and the performances are bright, especially Thompson’s – but how plausible is director Sophie Hyde’s overly theatrical two-hander?

That will largely depend on how willing you are to believe that an intelligent, educated woman who was 40 at the turn of the century, worked as a teacher, and was presumably aware of the self-empowering feminist movement going on around her would wait so very long to attend to her own sexual needs.

Set in the tranquil Berlin precinct of Wannsee, The Conference is a solid German drama about the January 1942 meeting where the Nazi High Command calmly discussed the most logistically efficient and cost-effective methods to eradicate the Jewish population now under their control.

Undercutting the horrific nature of their plans for industrial-scale murder is the sedate nature of their leisurely discussion, which includes coffee breaks and a spot of smoking on the patio to admire the scenery. It’s chilling enough to count as a horror film.

British acting jewel Mark Rylance serves up another premium performance as timid tailor Leonard Burling in The Outfit, a fabulous, tightly plotted crime thriller that takes place circa 1956 across one night in a modest Chicago shop where he makes high-quality suits for his loyal clientele, which includes a host of smarmy gangsters.

As the eventful evening unfolds, Leonard and his assistant Mable (Zoey Deutch) find themselves embroiled in a deadly incident as a downtown gang war heats up. Full of twists and turns, the tale gradually quickens from a quiet start as the stakes get higher and higher, leading to a wholly unexpected ending. Terrific stuff.

The remarkable, daring 2018 rescue of 13 boys and their soccer coach from the depths of a flooded Thai cave is studiously recreated with great detail in Prime’s Thirteen Lives.

Anyone with an aversion to tight spaces needs to note that the production effort in replicating the constricting, narrow passages of the cave’s interior is especially vivid, with plenty of gasping and close calls highlighting the dangers the divers faced to get the boys out alive.

The hothouse environment of a busy London restaurant is vividly captured in Boiling Point (Prime), with all the tension, bickering, backstabbing, and back-room battles covered in an impressively choreographed single camera shot that swirls through the posh venue for 90 minutes without an edit.

The night starts off badly as head chef and co-owner Andy Jones (Stephen Graham) arrives to find a health department official issuing a warning about a chronic lapse in standards.

Then comes a battering of problems with unruly staff, difficult customers, poor service, personality clashes, a food critic, and the patronizing presence of a rival chef who claims to be there for support on a night when the place just might crack under the pressure.

With top-flight performances from the ensemble cast, Boiling Point is riveting drama from go to whoa – and unlike films such as 1917 and Birdman, which cleverly created the illusion of a continuous shot, Boiling Point is the real deal. No cheating.