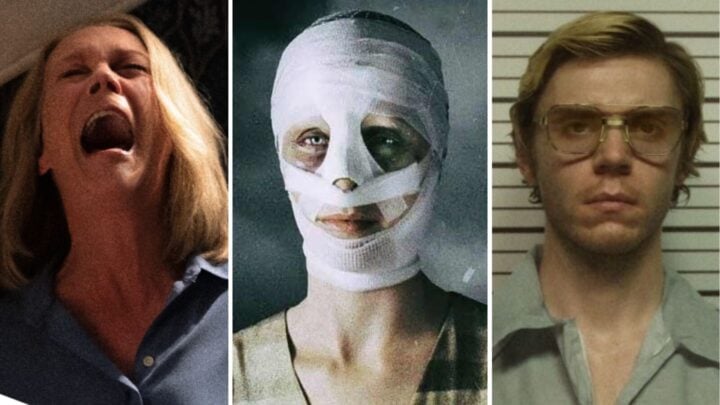 What better way to herald the middle of Halloween month than with the arrival of Halloween Ends, the 13th film in the never-say-die Halloween film franchise that began in 1978 when young Laurie (Jamie Lee Curtis) first encountered mask-wearing, knife-wielding killer Michael Myers.

In what playfully promises to be the final film in the series – unless it makes a dollar, of course – Laurie is now living in Haddonfield with her granddaughter, tapping out her memoirs and apparently happy enough to put up Halloween decorations.

But locals still resent her for provoking Michael Myers to continue his killing spree – and he’s back providing the requisite amount of slicing and dicing to keep fans of the franchise happy. Until next time, that is.

Still on the horror front and spooking multiplex audiences across the country is Smile, a premium quality fright-fest in which a psychiatrist (Sosie Bacon) uncovers a pattern of deaths that are foreshadowed by hallucinations involving patients with lethal grins. The film mixes old-fashioned scare tactics with a fresh take on psychological horror that knows how to grab your attention and deliver some top-shelf shocks.

Want more? In Prime’s terrifically chilling Goodnight Mommy, twin brothers Elias and Lukas pay what is supposed to be a friendly visit to their divorced mother (Naomi Watts), a former actress aching for a comeback.

But something’s up. Her face is covered in bandages and her strange behaviour suggests she might possibly not be who she says she is. The sense of threat is high and Watts does a great job of filling the boys with fear as they figure out how best to uncover the truth about what’s going on.

A gift for devotees of old-school, blood-soaked slasher films is Project Wolf Hunting, an over-the-top splatter film from South Korea about a cargo ship transporting a gaggle of prisoners who, of course, break free and engage in a prolonged round of ultra-violent mayhem. Prepare for plenty of shooting, stabbing and geysers of blood. Not a family film.

A world away from the fantasy horror of Halloween films are the real-world horrors depicted in Dahmer – Monster: The Jeffrey Dahmer Story, a thoroughly researched, thoroughly riveting 10-part Netflix series dramatizing the life of Jeffrey Dahmer, who murdered 17 young men in Milwaukee, Wisconsin between 1978 and 1991.

Covering the story in detail and from every conceivable angle – the victims; the police; the parents; the neighbours; the media; Dahmer’s school days – the piercing saga is anchored by three extraordinary performances.

As Dahmer, Evan Peters is powerful and subdued; Richard Jenkins is extraordinary with his portrayal of Dahmer’s ever-forgiving father (both served as producers); but it’s Niecy Nash who stands out as Dahmer’s long-suffering neighbour, forever complaining about the foul stench drifting from his apartment into hers through the vent. Also, there’s all that screaming.

The show dares to humanize Dahmer by exploring his background, his schooling, his early fascination with dissection, his career failures, his sexuality and his over-powering desire to “consume” men to whom he was attracted.

But rest assured, there’s no excuse-making here. The series never loses sight that Dahmer was a cretinous, evil deviant who, once imprisoned, came to enjoy his notorious new-found celebrity thanks to fan mail, requests for autographs and comic books about his ghastly crimes.

Among the many choice items gracing the arthouse circuit is the Danish treat A Taste of Hunger, a biting drama about a well-to-do Copenhagen couple trying to make a success of their high-end restaurant while dealing with an infidelity crisis.

For a strong dose of something wild and different, the highly stylish, off-beat supernatural comedy-drama Mona Lisa and the Blood Moon takes us to the underside of New Orleans after a young woman with Jedi-like mind control powers (Jun Jong-seo) escapes from a mental institution.

She befriends a street-smart stripper and hustler (Kate Hudson) who uses her to make easy money, despite the objections of her son. It also stars Craig Robinson from The Office as a very determined cop.

Back on the couch, be sure to check out these two hot items on Netflix.

Luckiest Girl Alive tells of a successful New York journalist (Mila Kunis) whose life is disrupted when a fellow survivor of a school shooting releases a book, forcing her to relive that trauma and the one she endured shortly beforehand. The story firms up after a shaky start, delivering a very strong third act.

In Mr Harrigan’s Phone teenager Craig (Jaeden Martell) forms an unusual friendship with the titular billionaire (Donald Sutherland), who comes to enjoy the iPhone he receives as a gift.

Directed by John Lee Hancock (The Blind Side; The Founder) and based on a Stephen King short story, it’s a modest yet captivating fable with a neat moral about the responsibility that comes with new-found power.

And it’s always a pleasure watching a seasoned veteran like Sutherland, now 87, strutting his stuff with such ease and conviction.