The Aussies playing their hearts out in the 2023 Australian Open 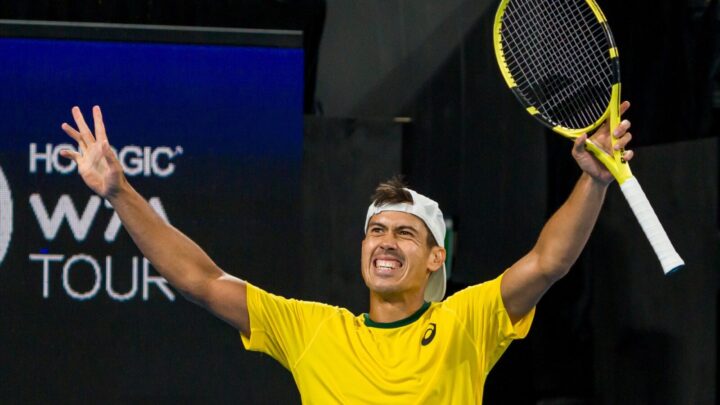 “Kubler has done it! For the first time in his career he made it to the second round of the Australian Open,” exclaimed the enthusiastic Australian Open commentator, citing Jason Kubler’s extraordinary play.

So, irrespective of his result in the second round, this victory already made Kubler exceed his previous best achievements.

What was super-impressive in Kubler’s winning matches in the United Cup and in the first round of the Adelaide International 2, was the reliability of his giant first serves going in, which allowed him to control the games.

He was playing so well, that commentator John Fitzgerald urged Layton Hewitt during his praise-rich commentary of Jason’s first-round victory in the Adelaide International 2, that Hewitt should regularly include Kubler in the Davis Cup line-up.

Sure enough, Kubler’s first serve worked beautifully too in the first round of the Australian Open helping him to claim the first set and then, in turn, have him serve for the second set.

But then all of a sudden Kubler just could not find his first serve to quickly finish off the set.

The unfolding temporary drama in which Kuber was nearly broken in his critical sixth game illustrated what major role psychology plays in getting in or missing the first serve.

A good first serve tends to either result in an ace or a poor return from the receiver typically allowing the server to control the game.

But what might have run through Kubler’s mind was that he was just a few points away from winning the second set too, so that he was on his way to a two-third success in winning the match.

But Kubler had never before been able to win his opening round of a Grand Slam.

So the realisation of how close he was getting to such victory now for the first time, may have made him anxious and unable to focus fully on his serve.

This anxiety over winning when a player is about to achieve his first Grand Slam match victory is very common and it has cost many a player their match in Grand Slams even after winning the first two sets.

But to Kubler’s credit, he was able to eventually regain his equilibrium and win the second set.

Having struggled through this temporary loss of his first serve, Kubler was not going to repeat the same mistake in the third set, where he managed to produce good first serves right until the end of the match.

Well, if Kubler managed to achieve his first victory in the Australian Open, his compatriot, John Millman, also had a long time “first” in winning a five-set match that was also on Monday in the first round of the Australian Open.

The last time Millman was victorious in a five-setter, was in 2016.

Since then he had lost seven five-set matches until he broke the drought now with a well-deserved five-setter victory against Huesler, winning the last set 6:3.

It is wonderful to see the 33-year-old in peak form.

He is legendary for being a fighting machine and he keeps reminding us of his tendency ‘to leave it all out on the court.’

Of the Aussies who had their opening round on the second day of the Australian Open, a brave Kimberly Birrell has fought back from the brink of defeat to eliminate No.31 seed Kaia Kanepi; Jordan Thompson crashed out in a five-setter, defeated by the American J.J. Wolf; Alex de Minaur cruised through to the second round through winning in three straight and quick sets against the Taiwanese Y.Hsu and

In a sea-sawing five-setter, lasting over four hours – the longest match Popyrin has ever played – he prevailed over another Taiwanese, C.Cheng, with a decisive 6:1 fifth set victory, and Kokkinakis ranked No.159, defeated Fognini, No.55 with the greatest of ease in 3 straight sets.

In the second round of the tournament, in a hard-fought match, Kubler was unfortunately eliminated by the high–ranked Khachanov in four sets, while the always-dangerous Millman was overcome by Medvedev in three sets.