‘Raging hormones and fits of passion: Remembering the early days of marriage’ 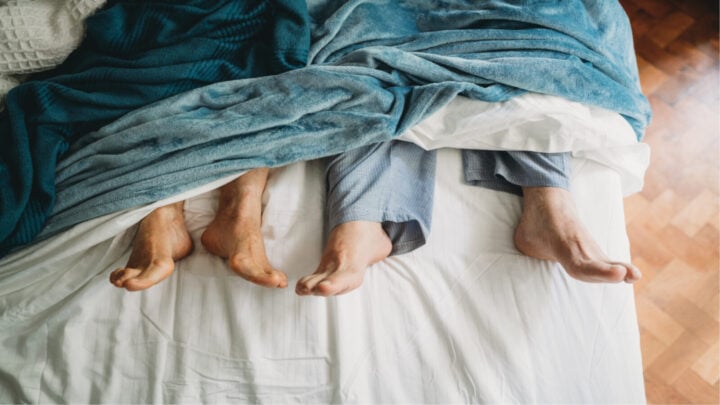 Brian reflects on over 60 years of marriage. Source: Getty

Love, or perhaps more accurately passion, is about the most powerful emotion to affect the human psyche, outweighing greed, the desire for power and even the need for happiness. And most of us will go to almost any lengths to know it and to be part of it. Fortunately, for many of us, it arrives normally and naturally, as a part of growing into adulthood, with the meeting of that vital one person who is almost immediately recognised at ‘the one’!

Oh, the passion doesn’t always come straight away I know, in fact many couples display a complete disinterest in the their future partner when they first meet, but there always seems to be some thread that can be woven into something stronger over a period of time, almost as if we all possess some sort of extrasensory perception that guides us until we can start to work things out for ourselves.

Mine is a good case in point, I knew Jacqui’s parents long before I even met her. They were part of a Friday-night drinking group that met every week to spend a pleasant evening together; I had known them for a couple of years before they started to bring their trainee-nurse daughter along to the pub with them, at the end of her day’s shift at the hospital. She was a quiet little thing in those days. A glass of sherry lasted her for the whole evening and she sat, mainly quietly, listening to the usual pub noises going on all around us. I got to know her quite well at that time, on a purely friendly basis really, until one magic evening when Elsie, (Jacqui’s Mum), asked me if I would be good enough to run her home, because she and Bert (Dad) were going on to another engagement. Naturally, gentleman that I am, I agreed, to help them out – and that was the start of more than 60 years together.

The passion we enjoyed later took its first hesitant steps that Friday night, with a bit of a snog on the doorsteps of Jacqui’s home, but we were both well and truly hooked! In fact we often joke even to this day, that Elsie brought me for Jacqui that fateful evening; I say they’d been grooming me for it during the previous couple of years I knew them! Anyway, within a couple of months we were engaged.

As if fate was taking a part in our life’s adventure, only three days after we got engaged, I was offered a position by my then employer to start a studio in a factory they had just bought in New Zealand, something that must have been somewhat of a traumatic shock to Elsie and Bert – they’d only just hooked me and now I was repaying them by whisking their lovely daughter half way round the world, a world that still didn’t have FaceTime, large jet aircraft or even email, to make us seem a little closer. But they bore it well and within another few months we were married and on our way to a brand new life where we were going to be pretty well standing on our own two feet, with no other relatives near at hand to call on, should we need help or advice. Being so totally on our own we really only had each other for support and most importantly, for love!

Anyway, to get back to the start of this blog … of course we were both very young at that stage of our lives, just in our early twenties, and hot passion and even hotter hormones were pulsing through our bodies, so we were continually looking for ways to indulge that passion, no matter how, or when! On one occasion we indulged our passion against the refrigerator in the kitchen, on another we indulged our passion on a narrow ledge half way down a sheer cliff, (that really WAS a thrill!), and on another, some years later, we indulged our passion on a river bank in the town of Heathcote, near Bendigo. And this went on, as I’m sure it did for most readers when they were young, for quite a few years, in a lot of places!

Of course this all happened up to sixty-one years ago, and it’s not quite the same now, Jacqui and I have slowed down somewhat, in fact I’d go so far as to say we are now at the station! But we have enjoyed a great life together, indulged ourselves as indicated, had the occasional (non-violent!) difference of opinion, and done most of the things we set out to do when we first got married and we spent the first night of our honeymoon in Paradise! Not quite as exotic as it may seem, Paradise was the name of a motel near Bristol, where we stayed the night while heading for Devon, just so that we could always say the first night was, indeed, paradise! I have to say though, this was another time when we indulged ourselves.

How has your marriage changed over the years?