‘Learning throughout life: Am I wiser or dumber now that I’m a septuagenarian’ 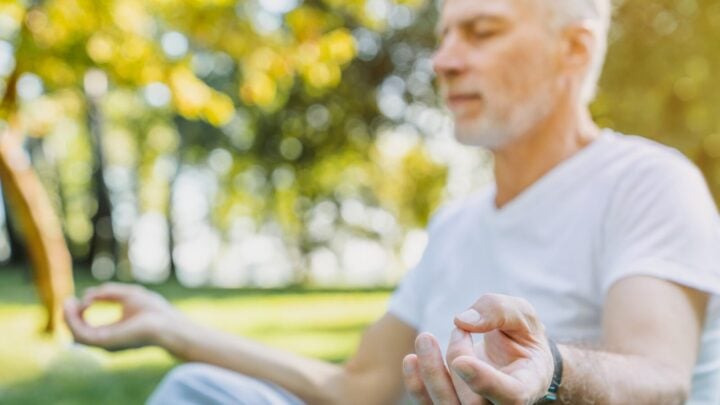 When Andris got sick and tired of his anxiety, he decided to give yoga and meditation a go. Source: Getty Images

Having so far lived for more than 70 years, have I become wiser of dumber? Probably both.

The punchline of ‘the priest and the old man joke’ definitely applies to me … Remember?

The priest asks: “How often do you think of the Hereafter?”

“Oh,” sighs the old man, “all the time. Like now, I came out to the laundry here and I can’t help asking: What am I ‘here after’?”

But more seriously; these days I am delighted I have lived long. It has resulted in the accumulation of lots of experiences. I view my life as a continuous experiment, hopefully yielding me more glimpses of the truth.

Ever since I have known my mind, even as a young kid, I asked old people: “What are the most important things you have learned from life?”

The typical answers were: “The importance of love, trust and generosity. Treat others as you want them to treat you.”

I came to the conclusion there are two ways to grow old: to mature or to shrivel up spiritually. The soul either blossoms or joins the physical body in losing the vigour of youth.

Yet between the ages of 17 and 30, I came to loathe even the word ‘spiritual’.

“This word,” I shouted from my high horse, “I ban from my vocabulary! It’s a lot of hogwash. There is only the material reality. The so called ‘spiritual’ is just the subtlest layer of the material.”

Yes, then I was quite a card-carrying atheist, if a pretty anxious and confused one concerning the purpose of my life. Yet, when I got sick and tired of my anxiety, I decided to give yoga a go. After all, the promise was, that it would teach me to relax.

Well, indeed, I did learn deep relaxation, but together with it I got something else too I did not bargain for: spiritual experiences.

I fought back. “I am strictly interested in the science of yoga only. Spare me of the so called ‘spiritual’ delusions!”

Alas, from the first day I experienced yoga, I fell in love with Kirtan, which is a form of musical meditation. I immediately bought a harmonium and began to sing Kirtans daily like ‘Govinda Jaya Jaya’ and ‘Shri Krishna Chaitanya Prabhu Nityananda’.

Here I was, an atheist, enthusiastically chanting the various names of God in Sanskrit. I was relaxed into it, by having the doubter in me short-circuited by my smart and perhaps cunning teachers. They blindsided the atheist in me by the reassurance that all I needed to do was to enjoy singing and never even think of the meaning of the mantras that I was singing. Kirtan was meant to be a consciousness elevating experience not an intellectual exercise.

Little did I realise such yoga practices, perhaps the vibrations of these mantras, also began to expand my consciousness into my unconscious and to depth-experiences I could not access before.
When I did Kirtan, I not only tended to be cheerful, but I also felt physically rejuvenated. I only learned some 30 years later, that this feeling of ‘physical rejuvenation’, was not just a passing mood or a mental delusion, but an empirically proven scientific fact.

Kirtan has by now been scientifically shown to stimulate the production of telomerase enzymes, which are responsible for replenishing telomeres, a chemical substance that is necessary for healthy chromosome divisions to avoid cancerous divisions, a host of chronic diseases and the ravages of ageing. Thus, Kirtan is a vital scientifically proven rejuvenating practice.

Then, one afternoon, in my mid-30s, when I was playing Kirtan on my own, I suddenly saw myself at the age of 17, around the time when I became an atheist, following my dad’s death.

I was at his funeral, following the hearse as it was taking the coffin towards the freshly dug grave. I was walking arms in arms with Mum on one side and my sister on the other. I was dragging them forward to keep up with the hearse as they were bawling their eyes out. But I was emotionally frozen. I did not shed a single tear. Maybe then I had to be strong, to hold up these two, nearly fainting women?

As I saw this picture in my mind’s eye, I burst out crying. It came on me with the force of pent up water that was demolishing the wall of the dam that has kept it captive for years. I could only stop crying 30 minutes later, when I fell on the floor utterly exhausted. Yet my relief and my sense of lightness inside were palpable. As if, to use another analogy, the pus that remained buried under an unhealed wound popped so that it was cleansed and could heal. From there on, I recalled more of the joyous times I had with my dad before the tragedy of losing him so young.

I started to wonder about my atheism. It was when I was inconsolable, viewing my dad’s dead body when I turned into an atheist. As if Dad was my God, so his death was also God’s death. But did I throw out the baby with the bath water? Did God really die, or only I concluded so, because I could not grieve properly over Dad’s death? This was an uncomfortable thought.

Eventually, the end of my atheism came when I felt a love towards another person that was so intense I became convinced it came from a divine source. As I looked into the eyes of my beloved, I was sure that this intense love was merely flowing through us but its source is a higher power that is filling me and my soul mate full with love.

There was no turning back. Since, spiritually-powered unconditional love has been giving meaning to and goal to my life.

Recently I discovered, what seems to me, a perfect definition of spirituality, by clinical psychologist Lisa Miller. She writes in her book, The Spiritual Child: The New Science on Parenting for Health and Lifelong Thriving, that spirituality is “a personal relationship to a higher power, such as nature, God, spirit or the universe, that is loving and guiding”.

She says research shows children who have a positive, active relationship to spirituality are:

As a naïve, young child, maybe I was more connected with such spirituality than I was through much of my adulthood.

But it is better to wake up late than never. I sense that the older I get, the more fully I embrace my spirituality. This fills me with lots of hope and love.

If someone asked, what is the most important thing you've learned in your life?