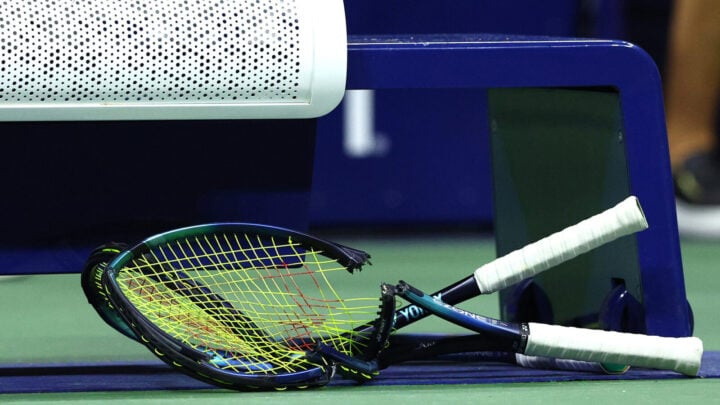 This blogger shares his thoughts on Kyrgios' on court behaviour. Source: Getty

He’s given so much exquisite joy and so much ugliness to his fans, that watching him tends to result in an emotional roller coaster of a love-hate relationship.

Every time one is ready to forgive all his past misbehaviours because he keeps playing exquisite tennis and every time one hopes that just maybe by now at the age of 27 he has matured enough to control his tantrums, he blows one’s trust for the umpteenth time as he reverts to most ugly and unsportsmanlike behaviours.

The latest example of this was just after he shook hands with the umpire following his loss in the quarter-final of the US Open 2022, he proceeded to destroy not one, but two, tennis rackets in a fit of rage.

Kyrgios copped altogether five separate fines for the tournament, by far the most of any other player.

But, then such fines don’t seem to deter him the slightest. They’re small bikkies in comparison with his earnings from the US Open which amounts to more than $660,000.

Kyrgios’ most formidable opponent on the tennis court is himself.

There is a pattern now, which unfortunately seems to have become an ingrained response from him when things are not going his way.

This pattern results in escalating blaming responses, making him more negative and emotionally preoccupied with this blaming dialogue in which he seems to get increasingly lost when not scoring well.

This process makes him incredibly fragile and prone to implosion once he reaches a point of no return.

If his extraordinary playing skills once again allow him to begin to score well and get ahead, then there is a chance that he can pull himself back from the brink of self-defeat.

But, if he continues falling behind his opponent, then God help him – his apparently mad alter ego will pull him into a whirlwind of negativity which tends to sabotage his chance of being able to rely on a disciplined fight-back from the claws of defeat.

I cannot recall a single time when I saw Kyrgios actually being able to lose with grace.

You can see an almost predictable pattern of disgraceful behaviour on his part when he’s heading towards defeat.

It starts with angry self-talk, twisting his head from side to side in disapproval.

He then often angrily eyeballs his team members in their audience box.

He implies to them, like a spoilt, self-entitled child, that whatever mistake he is making, is their fault.

He is the ‘infant terrible’ abusing his carers, while they in turn seem to be absolutely frightened of him and attempt to go out of their way to appease him.

If they stand up to encourage him, he gets upset; if then in turn they sit down to cater for his whim, then they are to be blamed for not cheering him enough.

They yell out ‘Come on!’- but that’s no good because then they’re ‘hassling’ him.

If they don’t yell ‘come on’, that’s wrong too; is it a sign that they don’t love him enough?

Tennis commentator Todd Woodbridge responded to Kyrgios’ antics by advising his support team that if he again abuses them, then they should just stand up and walk out on him.

Kyrgios says, he doesn’t need a trainer. This may, or may not be true, given his extraordinary talent as a player.

But Nick, it seems to me, desperately needs a sport psychologist to work with him to address his mental fragility involving his tendency in failing to focus his mind fully on his game, instead allowing himself to become the victim of his paranoid blaming habit.

In the second round of the 2022 US Open, he received a warning from the umpire for shouting foul words toward his support team members.

I wonder if his girlfriend or the others in his support team dare to confront him about his dysfunctional abuse of them and demand some respect from him.

One thing is sure.

If he is to have a good chance of winning Grand Slams, he needs to be able to preserve his energy and keep focusing on the ball to last out to win three sets throughout the tournament.

But, will his support team members tell him this unambiguously without mincing words?

And while they’re at it, will they let Kyrgios know what it’s like for them to be loyally supporting him game after game and in return, be abused by him in public, in front of all the stadium audiences, much of the time when things don’t work out for him on the court?

After his loss in the Quarter Finals of the 2022 US Open, Kyrgios said in his press conference that he felt devastated how his loss let down his followers. His devastation is understandable. But his reaction to it in deliberately destroying two rackets in front of the pact stadium is unacceptable.

Actually, Kyrgios’ tennis performance over the last few months has been nothing less than fantastic, overall. I think what lets his followers down is that his control over his temper lags far behind his ever-more brilliant and consistent ball control.