From ‘Elvis’ to ‘Top Gun: Maverick’: What the critics are saying about these new releases 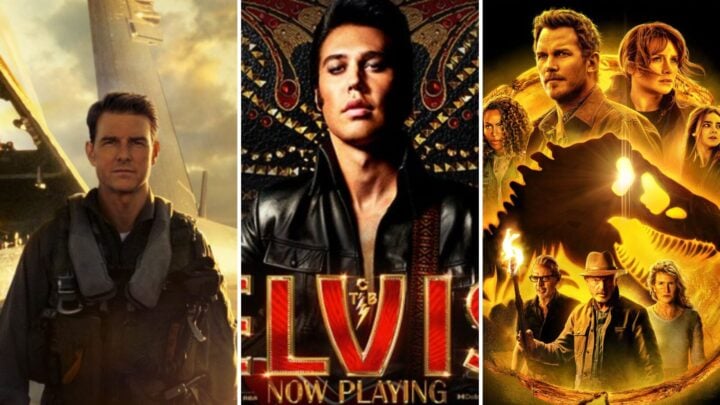 This blogger reviews all the latest releases. Source: @TopGunMovie/@ElvisMovie/@JurassicWorld/Twitter

It’s difficult to imagine anyone with even a passing interest in the life and music of Elvis Presley not having a blast of a time with Elvis, probably the most definitive and definitely the most unusual and exciting film about The King yet.

Director Baz Luhrmann, never one to do things by halves, delivers a dazzling roller-coaster ride through Presley’s astonishing career, from his beginnings on the carnival circuit to his conquest of Las Vegas and subsequent demise through drugs, exhaustion and exploitation by his life-long manager Colonel Tom Parker (played by Tom Hanks).

Bursting with as much energy as Elvis in full flight, the film moves like a bullet train for about 45 minutes. Once the pace settles down the central performances from Hanks and Austin Butler, who plays Elvis, really begin to shine. Full of insights into his culture-shifting life, Elvis is a knockout.

It’s school holiday time at the cinemas, meaning there’s a chance you might get pressed into taking kids to a film. So be warned: there’s good news and bad news.

The good news is that Minions: The Rise of Gru is an absolute delight. The fifth film in the outrageously successful Despicable Me franchise – they’ve made $3.5 billion at the box office so far, not counting the home market – it’s fast, funny and very, very silly. In other words, exactly what you expect from a Minions film.

The animation is first-class and the soundtrack is peppered with hits from the 1970s as the 12-year-old Gru (voiced by Steve Carell) tries to join a band of celebrity villains. Harking from the French animation studio Illumination, it’s designed to please kids and adults alike. And, even better news, it’s only 80 minutes long.

The bad news is that Disney’s much-hyped Lightyear is an expensive dirge. It’s meant to be the movie that Andy, the kid from the much-loved Toy Story films, saw in 1995 and loved so much he got the Buzz Lightyear toy, which we now learn has been a piece of movie merchandise all along.

On top of not looking at all like a film from 1995, Lightyear is saddled with a lame, cliche-filled time travel plot that will bore adults and confuse kids. It’s a rare thing for Pixar, the animation studio that has given us such classics as Finding Nemo, Wall-E and Monsters Inc, to have a flop, but this $200 million behemoth has tanked at the US box office.

The third film in the second trilogy of the Jurassic series – as with all franchises, they’re just going to keep making them until one of them loses money – it’s a super-sized monster movie with outstanding visual effects and almost non-stop, big-scale action as the team tries getting to the bottom of what’s going on at an elaborate research centre.

The superbly staged chase sequence on Malta literally gives the dinosaurs a run for their money and is the highlight in a fabulously entertaining lark.

The sensational Top Gun: Maverick is a prime example of how to do a sequel properly, especially such a belated one: blend the old with the new and anchor it all in human emotion.

Some 36 years after his star-making 1986 mega-hit Top Gun, Tom Cruise reprises the irascible Maverick, here tasked with training a group of young hot-shot pilots, including Rooster (Miles Teller), the son of Mav’s co-pilot Goose who was killed in the first film.

Though full of young blood and top-flight action, the film is surprisingly moving: the meeting between Cruise and the ailing Val Kilmer (who played Iceman) might just bring a tear to the eye.

The clean billion the film has taken at the global box office should make a nice present for Tom Cruise as he prepares to become everybody’s favourite 60-year-old when his birthday hits on 3 July. No wonder the dude is always smiling.