Banning burkinis: It doesn’t stop terrorism but it does curtail women’s freedom 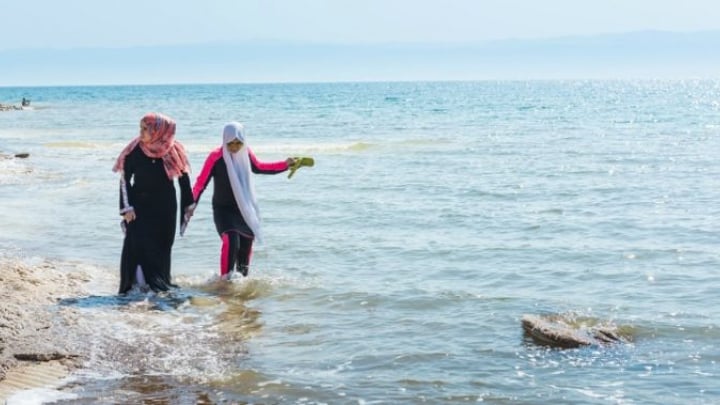 In Nice, France, four armed policemen forced a woman on the beach to remove her burkini, a designer bathing suit that allows religious Muslim women to dress modestly and to swim. The Mayor of Nice declared this was necessary to stop terrorism.

Certainly France has seen plenty of that recently with the mass murder at the Charlie Hebdo office, to the soccer stadium and Bataclan, and siege of the peaceful Promenade des Anglais in Nice.

“Nice is the most recent French resort to ban the burkini, following bans in the Corsican town of Disco, and the Riviera resorts of Cannes and Villeneuve-Loubet,” writes Harry Cockburn for the Independent.

These vicious attacks have fuelled intense Islamophobia in response. However, restricting the dress of Muslims in public places crosses a boundary in that it can be perceived as curtailing religious freedom.

Relying on banning religiously prescribed clothing in France is nothing new. A law in 2004 banned the wearing of overt religious symbols in public primary and secondary schools. It included wearing the Jewish kippa, large crosses, and the hijab, but affected disproportionately those wearing the hijab because there are few parochial schools for Muslims, so they have no choice but to go to state schools.

These laws are only the latest to penalise Muslim women in the name of France’s national precept of secularism, or ‘laïcit — headscarves have been banned in public schools since 2004, and the niqab, or full-face veil, has been verboten in public places since 2011.

None of these restrictions have stopped terrorism, though they may have limited religious freedom and freedom of expression through attire.

In America, the same tactics of limiting fashion options, particularly for women have been used over and over again. Many American women have been asked to leave public places because they are nursing a baby even if, like the French Muslim women, they are more covered than most of those around them. This one I know from personal experience. In college, we were forced to wear a trench coat over our knee-length Bermuda shorts when they first came out.

Now in France they are punishing women on the beach for being too covered. This rule has no rhyme or reason from a modesty viewpoint since there are many bare-chested, bikini-clad European women on French beaches. And, since health experts are telling us we should cover ourselves to protect ourselves from the sun, we know it’s not about getting vitamin D. Why is the woman in a T-shirt and jeans allowed on the beach when a woman in a burkini is not? What about the nun in full regalia? All are covered head to toe. Is it Xenophobia? Islamophobia? Misogyny? Would a nun on the beach in Nice be asked by armed policemen to remove her habit? We see the bias and hypocrisy.

Too much cover, too little cover, we women just can’t do it right. This obsession with our attire is all about our perceived irresistibility as sexual objects. I suppose we should be flattered!

From a capitalist viewpoint France’s ban on burkinis at beaches is a boon. The Australian designer who thought of the notion of a burkini has benefitted. Sales have gone up 200 per cent since the ban. She has opened her market by insisting the burkini gives women freedom. Freedom to go out in the sun if they have cancer or are on chemotherapy, and freedom to be both religious and physically fit. True and true!

But this too is not the whole story. Dictating conservative dress has long been touted as a way to protect women’s freedom. As in “she can walk safely at night if only she didn’t wear a mini-skirt or a low cut dress or…”

As we delve deeper we see that this kind of outfit is a boon to many of us who want to cover what we’ve been taught to think of as ugly or provocative. Varicose veins, cellulite, and scars. Breasts, and legs.

Burkini by other names can unite many religious groups: orthodox Jews might turn the pants into a long skirt and Mormons might fashion it like the undergarments they are required to wear. Oh the opportunity for Victoria’s Secret, not only lacy and colored bikini underwear, but they could really go to town designing exquisite undergarments and peignoir sets for every religious group. This is the beginning of a retail fashion gold mine!

It is not, however, a solution to the problem of terrorism which is the reason the Mayor of Nice proudly declares he is curtailing by this action. We can understand his desperation to protect his city and its beautiful beaches and to maintain tourism, such an important source of revenue for Nice and the rest of the French Riviera.

Banning burkinis on the beach, besides curtailing women’s freedom, would hardly be an effective deterrent to terrorists. No, this is just another example of using women’s bodies to avoid the complicated and expensive social issues. This also seems another example of overzealous policing, because police can’t stop terrorism or violence they can at least do something. We know how racial profiling has led to many black deaths in America. We can’t condone a sideshow of action to stand in for real counterterrorism.

This is a distraction, a way to make some people feel the police are doing something. Perhaps it’s not so different from American politicians who focus on restricting women’s choices by opposing abortion rather than improving maternity care, childcare, and wages, which might actually reduce the need to abort unplanned children.

We all want to get rid of terrorists, but restricting women’s dress isn’t going to do it. Toning down rhetoric, education, and realistic expectations of what government and politics and revolution can actually accomplish would probably be much more effective strategies.

In the meantime, while we personally choose to have the free fresh wind on our skin we support letting others coverup–that is a personal choice to be respected and protected. Freedom for all women, of whatever religious and personal beliefs, to cover themselves, wear scanty bikinis, or only the ‘outfit’ God gave them on the beach must be protected and defended. Whatever works to keep us healthy and happy and does not hurt others seems like a good fashion option! Thank you, creative designers! Keep on giving us clothing choices that allow for our many selves and our individual tastes and preferences.

What do you think about this issue? Share your thoughts with us.

Author’s Note: Since this piece was written, the highest French Court overturned the burkini ban in one of the Rivera towns, Villeneuve-Loubet, of course, the controversy continues. The White House weighed in, in favour of religious freedom.