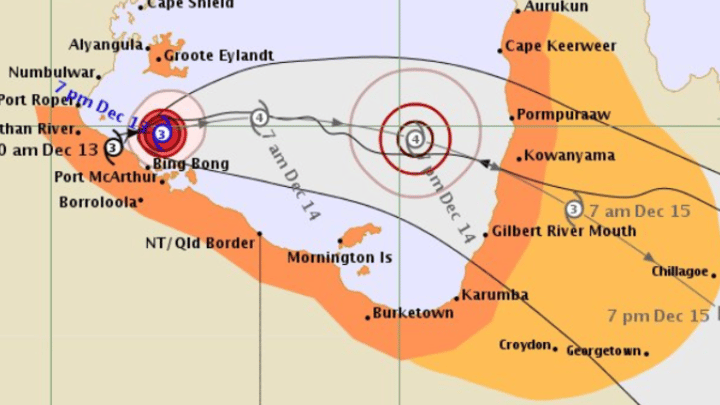 Tropical cyclone Owen is expected to intensify from a category three to category four on Friday. Source: Twitter/ Bureau of Meteorology, Northern Territory

“Zombie” cyclone Owen has continued to intensify in the north of Australia bringing severe thunderstorms and gail force winds to the east coast of the country.

Residents in the top of Australia and right down the east coast are being urged to prepare for a lashing with expectations Owen will build to a category four cyclone on Friday.

The tropical storm has already wreaked havoc on parts of the country as it makes its way across the Gulf of Carpentaria. The Bureau of Meteorology recorded winds between Port Roper and Port McArthur in the Northern Territory of 140 kilometres per hour and wind gusts of 195km/h.

“The system remains a category three system and is likely to continue developing further over the next six to 24 hours as it moves east over open waters through a favourable environment. Severe TC Owen is expected to reach Category 4 intensity in the next few hours,” the BoM said in a weather update on Friday morning.

“A coastal crossing along the south east Gulf of Carpentaria coat between Gilbert River Mouth and Pormpuraaw later Friday or early Saturday is likely, and there is a chance the cyclone will cross the coast as a category 4 system. Owen will then weaken slowly as it moves southeastwards inland over the southern Cape York Peninsula.”

Tropical Cyclone Owen is intensifying south of Groote Eylandt, expected to move slowly overnight and be close to the NT coast before moving eastwards during Thursday. #CycloneOwen https://t.co/AWJKLhynnl pic.twitter.com/QEiwCk29F2

BoM has warned of very destructive winds with gusts of up to 195km/ph and heavy rainfall which may lead to flash flooding across southern Cape York Peninsula on Friday and Saturday as the cyclone approaches.

Residents in the top end of Australia near the Northern Territory and Queensland border are being urged to prepare for damaging conditions as the cyclone intensifies over the course of the weekend.

Those living between the NT/QLD border and Aurukun, including Mornington Island, Karumba and Pormpuraaw, have been told to secure property to protect themselves and others from the gail force winds.

While people inland from Karumba to Aurukun as far as Georgetown, Chillagoe and Coen are also being urged to consider what action they will need to take if the cyclone threat increases.

Other parts of the state including Cairns and right down to the Gold Coast are also expected to feel the effects of the cyclone with predictions of at least 200mm of rainfall from Friday to Monday.

Cairns, Townsville and Mackay are forecast to receive the majority of the rain with a maximum of around 250mm.

Queensland and Northern Territory residents aren’t the only ones caught in dangerous weather with heavy rainfall causing flooding throughout some parts of Victoria on Thursday.

Best bet today is some goose trying to drive their car through flood waters in Melbourne and getting stuck pic.twitter.com/X4HD8o8j8A

A low pressure system has led to flash flooding, wreaking havoc on the state with around 100 forced to abandon their cars on the Hume Freeway north of Wangaratta, in north-eastern Victoria.

Many took to social media to share their shocking photos of the flooding with water reaching far above the tyres of cars along the road.

The stormy weather is forecast to continue throughout Victoria on Friday.

Have you felt the effects of cyclone Owen? Have you ever been caught in a storm like this?