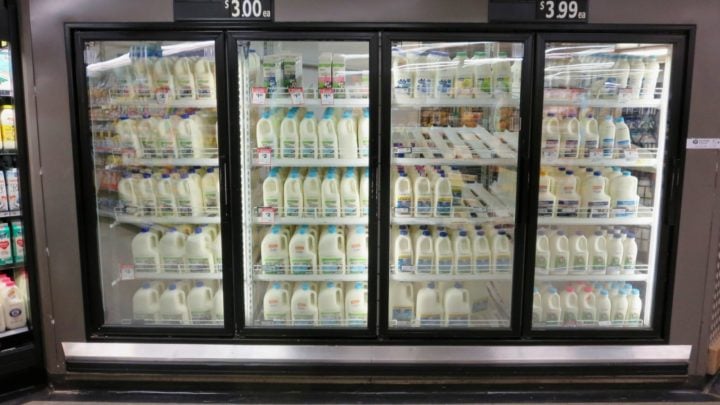 Woolworths will stop selling milk for $1 a litre, in a move it says will help restore Australian dairy farmers’ commercial viability.

From Tuesday, the supermarket giant will remove the $1 price tag nationwide, Woolworths said in a statement on Monday. Both Woolworths and Coles started selling $1-per-litre milk in 2011 as part of their price battle for market share.

The move will see the supermarket sell two- and three-litre varieties of Woolworths branded fresh milk for $2.20 and $3.30 respectively promising that every cent of the increase will end up with 450 Australian dairy farmers that supply its home-brand milk.

Last year, Woolworths began offering a Drought Relief Milk range, which included a 10 per cent levy which was donated back to the farmers. But it also continued to sell its $1 range alongside the more expensive product.

“We believe the long term sustainability of our dairy industry – and the regional communities they help support – is incredibly important for Australia,” Woolworths Group CEO Brad Banducci said.

“This is affecting milk production and farm viability, which is devastating for farmers and the regional communities in which they live. It’s clear something needs to change and we want to play a constructive role in making this happen.”

Meanwhile, Australian Dairy Farmers CEO David Inall said the move was a “game changer in the fight against discount dairy that has long frustrated the industry”.

“Removing one-dollar milk is not just intended to restore farmers’ financial confidence, but it will also boost confidence in regional communities and small businesses that rely on the industry,” he said. “Consumers can buy fresh milk from Woolworths knowing they are supporting the Australian farmers who supplied it.”

Woolworths was the first Australian supermarket to launch Drought Relief Milk back in September 2018. Following in Woolworths’ footsteps, Coles responded to the drought affecting some diary suppliers with a temporary 10 per cent levy on three-litre bottles of milk.

“Woolworths will continue to consult and engage with dairy industry bodies on longer term reform and payment mechanisms,” the supermarket concluded.

It comes after a young South Australian dairy farmer bid a tearful goodbye to the industry as her family’s farm struggled to get by amid the ongoing milk crisis.

The heartbroken farmer, who followed her father into the industry, struggled to hold back tears as she explained her family is only getting around 38 cents a litre for their milk, which is “completely unstable”. Sadly, she’s just one of many who have been drowning in the recent price crisis.

“We can’t really afford to keep going anymore,” a tearful Casey said. “We are forever the optimists that the industry will get better but for our family, we’ve come to a point where we can’t do it anymore.”

What are your thoughts on this? Will you be paying the extra money to support dairy farmers?