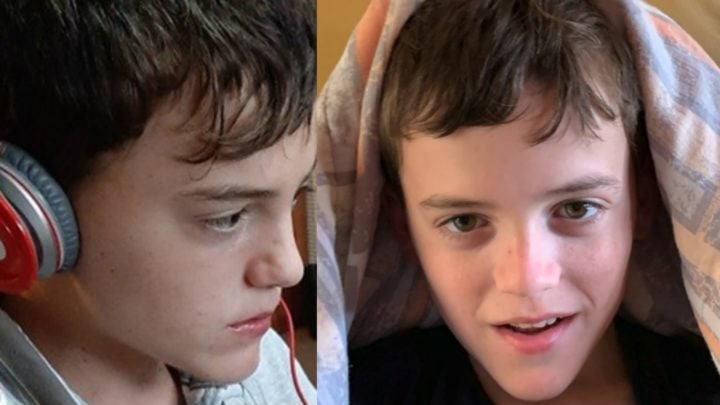 Will Callaghan was missing for 47 hours on Mount Disappointment. Source: Supplied.

Will Callaghan captured the hearts of the nation this week after he was rescued on Mount Disappointment, following a frantic three-day search. The teenager, who has non-verbal autism, spent 47 hours alone in the wilderness in freezing temperatures after walking off from his family during an afternoon hike on Monday.

The 14-year-old was transferred to hospital after being rescued to undergo observation, before being allowed to return home with his family on Thursday. And now, after Will’s first night back at home, his stepfather Nathan Ezard has revealed the first thing he did upon his return.

“He was straight through the gate and the first thing he did was sit down on his swing set have a big long swing,” he told the Today show on Friday. “Penny had to literally drag him inside out of the cold.”

Nathan added: “Will’s come out of this experience with a few cuts and bruises on the bottom of his feet. Surprisingly few for a kid who wandered around for two days in the freezing cold.”

It comes one day after Will’s mum Penny Callaghan delivered an update on her son’s condition, as she addressed the media outside of Melbourne’s Royal Children’s Hospital on Thursday. She revealed that her son was doing well, however had an insect trapped in his ear as well as a suspected broken foot.

“Yes, this was a massive ordeal for him. But to him it was probably just an adventure as well,” Penny said yesterday. “He’s just happy that I’m there, and he slept pretty well last night, a lot better than I did.”

She went on to discuss the support she has received from those within the autistic community since Will’s diagnosis at the age of two. She added: “It was mind-boggling and overwhelming, and it’s been a massive journey. [But] What do I do now? Do I tether him to me so this doesn’t happen again? Yes, it’s a terrifying thing and it may happen again and I have to do the best I can to make that not happen.

“It is tricky and you’re switched on all the time, it’s 24/7 and that’s where it gets tiring and that’s I suppose where we need good support. The NDIS does provide funds for that, but also there’s not that many people who are aware of really what autism is about.”

Australia rejoiced on Wednesday when the news broke that the missing teenager had been found on Victoria’s Mount Disappointment. Hundreds of volunteers and emergency first responders took part in the three-day rescue effort to find Will, with Victoria Police also adopting some more unusual techniques, including asking locals to barbecue onions and bacon in the hope of drawing Will in, and playing the Thomas the Tank Engine theme tune via loud speaker.

Will was finally located by SES volunteer Ben Gibbs just before 1pm on Wednesday.