Myths vs reality: What really happens to your body when you’re cremated 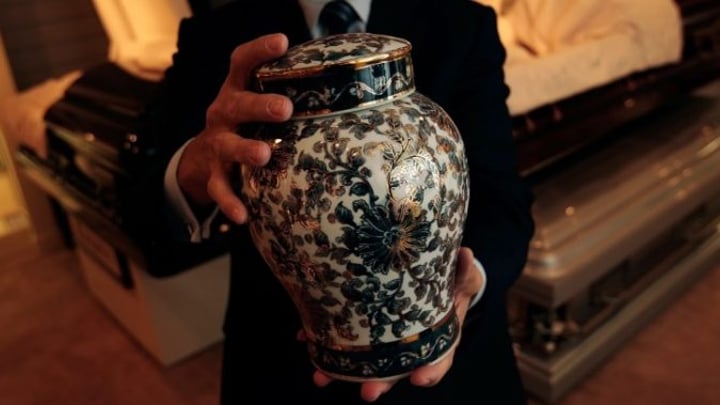 There are plenty of myths surrounding cremation, but some are completely true. Source: Getty.

There are plenty of myths surrounding exactly what happens to your body when it’s cremated, but while some are simply false, a few are completely true – and there are many you may not expect.

From the huge dangers of being cremated with a pacemaker fitted, to the high-speed sieving of your ashes afterwards, crematorium workers have exposed the hidden truths behind the fairly secretive industry.

Louise Singer, manager of Bramcote Bereavement Services in the UK, recently opened the doors to her centre to Nottinghamshire Live in an effort to expose the false rumours surrounding cremation, saying everything from claims coffins are swapped to rumours the ashes are mixed are simply untrue.

“We just want to reassure them through the process,” she told the news outlet. “We are also finding more people are planning their own funerals, choosing the chapel and music, and they want to look round.”

Here’s a look at exactly what happens when your body is cremated, according to Louise and other experts working in the industry.

Australian law states a cremation must take place within 48 hours of the funeral service, with many taking place within 24 hours.

The first step for crematorium workers is to check the coffin for anything that can’t be cremated with the body, whether it be pieces of metal or tributes that could cause issues during the process. However, it’s also a last vital chance to ensure the body doesn’t have a pacemaker fitted.

Louise explained to Nottinghamshire Live that pacemakers could explode when put under the intense hear of the furnaces. In fact, she claimed an exploding pacemaker can lift a 20-tonne crematory machine seven inches in to the air.

Read more: Buried or cremated? Over-60s get real about the big question

Meanwhile, crematorium operator David Bennett, from the NSW Northern Suburbs Memorial Gardens and Crematorium, told the Queensland Times recently: “Pacemakers are bad because they have been known to explode in the cremator and it can cause a lot of damage and at $110,000 to repair it’s an expensive proposition.”

Bennet added that each coffin is given a metal name plate with a unique number as soon as it arrives “for traceability”. That then remains with it throughout the process, to ensure there are never any mix-ups.

The main temperature in the furnace needs to be between 800-1000°C, and a body reportedly takes around an hour and a half to completely burn, (larger corpses sometimes taking up to four-and-a-half hours). Meanwhile, staff use a spy hole throughout to check on the progress.

Despite claims otherwise, both experts insisted that each body is burned with the coffin it arrives in, after being pushed into the furnace on a conveyor belt. The box burns almost instantly, leaving the body to take the longest.

“We charge the casket in and it will start to catch fire straight away,” Bennett added to the news outlet. “A large jet comes down from the top and will burn the lid off first. There’s a banana shape on the bed so when the casket goes in there’s a gap underneath and the air gets underneath it and burns a lot quicker.”

During the burning process, Louise explained that waste particles are sucked away and filtered to stop mercury from things like teeth fillings escaping into the atmosphere.

Eventually, the ashes fall through and are raked up, where they’re left to cool. Bennett explained that an “instruction fan” can be used to speed up the cooling process, before an “action processor” grinds the calcified bones to dust. However, Louise said that her centre has a machine designed to sieve the ashes at high speed to ensure they’re a fine sand-like dust at the end.

The sieve helps to remove any jewellery and metal parts such as knee or hip replacements that weren’t removed before the cremation began.

Did you know what happens to a body when it’s cremated? Would you prefer to be cremated or buried?