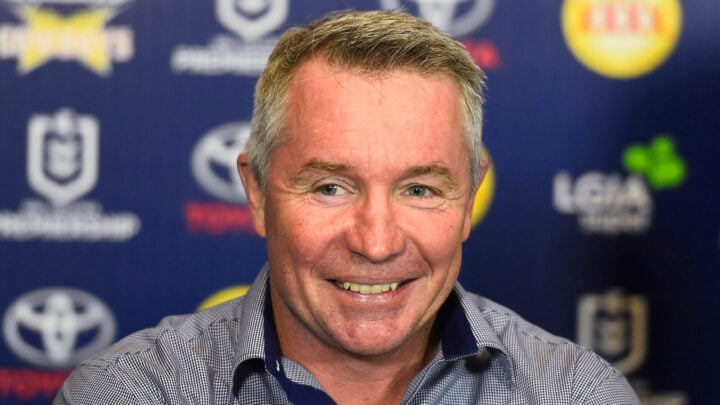 Rugby league greats have joined friends and family to share treasured memories of Paul Green and reflect on his contributions to the game. Source: Getty Images.

Members of the rugby league community such as Allan Langer, Wally Lewis, Steve Renouf, Wendell Sailor, and Kevin Walters began arriving for the ceremony at 11.00am to share treasured memories of Green and reflect on his contributions to the game.

The ceremony is expected to have 700 guests in attendance.

You can watch the funeral and memorial of Paul Green from 11am this morning.

Green’s former teammates Andrew Gee, Craig Greenhall and Danny Grimley, along with brother Rick, and friends Mark Beitz and Jamie Fitzpatrick will act as pallbearers for the funeral.

Green’s wife, Amanda, led the tributes for her late husband alongside her children where she recalled how she and Paul first met.

“Paul and I met met at the Mad Cow in Townsville, an establishment of many relationships,” Amanda recalled.

“The day Paul proposed he said to me you better strapped youself because it’s going to be one hell of a ride, and that it was.

“We had the deepest love and he made me feel deeply loved, we’ve always been a team.

“As heartbroken as I am today, I’ve loved every moment with Paul. I loved you yesterday, I love you today and I will love you tomorrow.”

Green’s friend, Mark Beitz, paid tribute to Green’s loyalty which he claimed was the late rugby icon’s “key trademark and it was a word he lived by everyday”.

“He was a perfectionist and he was just about perfect at everything he did,” Bietz said.

“And intelligence. Deeds, not words, this is what Paul lived by.

“To Emmy and Jed, dad’s looking down on you today and is extremely proud of you both.”

In addition to celebrating Green’s life, those in attendance will no doubt celebrate his decorated playing career that included taking the field an incredible 162 times with a number of clubs which included the Cronulla-Sutherland Sharks, North Queensland Cowboys, Sydney Roosters, Parramatta Eels, and the Brisbane Broncos.

Following Green’s impressive playing career he turned his attention toward coaching after his retirement, where he famously led the North Queensland Cowboys to their first Grand Final in a decade. The Cowboys went to win the final with a 17-16 win over the Brisbane Broncos. The monumental win made Green the first coach in history to defeat the Brisbane Broncos in a Grand Final.