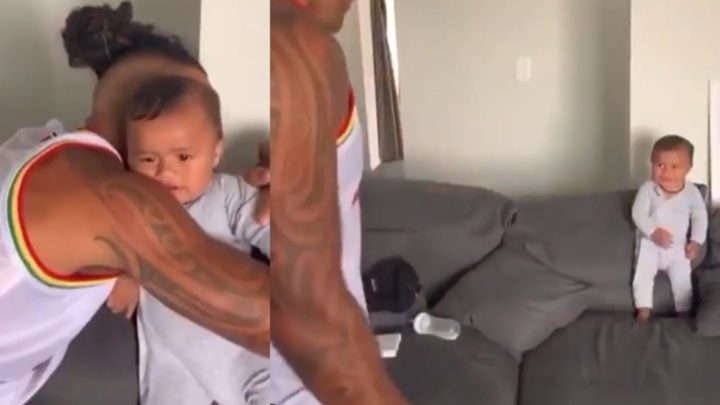 New Zealand’s All Blacks are known across the world for their passionate Haka performances, as they begin each match with a powerful rendition of either the Ka Mate Haka or the more recent Kapa O Pango. Now one of the national side’s star players has passed the baton onto his young son, teaching him how to perform the traditional Maori war dance at just eight months old.

All Blacks star Sean Wainui shared a cute video of himself teaching his son Kawariki the Haka on social media. The video was then shared on Instagram by his teammate Dan Carter who wrote: “Don’t know how I missed this. This made my day. Teach them young.”

The video begins with Wainui, who plays for Taranaki, and the Chiefs in Super Rugby, chanting the traditional ‘Ka Mate’ as his young son stares lovingly up at him from the sofa. Little Kawariki can be seen mimicking his father’s movements as he adorably slaps his arms down by his side.

As Wainui continues the chant – which has been performed by the All Blacks national rugby team since the 1880s – his son can be seen giggling as he copies his dad’s movements. The doting father then stamps his feet and moves forward before sitting alongside his little boy on the sofa.

The sweet clip ends with Wainui, 24, wrapping the toddler in a hug, as he finishes the performance to the sound of Kawariki’s adorable laughter.

Carter’s followers were delighted by the sweet video, with one writing: “That’s unbelievably cute. Love the little giggle at the end.” Another commented: “This is soooo cute! Thanks for sharing it with us all!”

While another said: “Absolutely love that!!!! Need more of these wonderful traditions passed on to the future generations!!”

The Haka is a Māori war dance that was traditionally reserved for the battlefield. The action-packed dance is a display of strength and pride, which includes powerful stomps of the feet, wide eyes and the well-known tongue poking. Today, the Haka is used during Māori ceremonies, celebrations and to honour guests. And, of course, by the All Blacks rugby team.