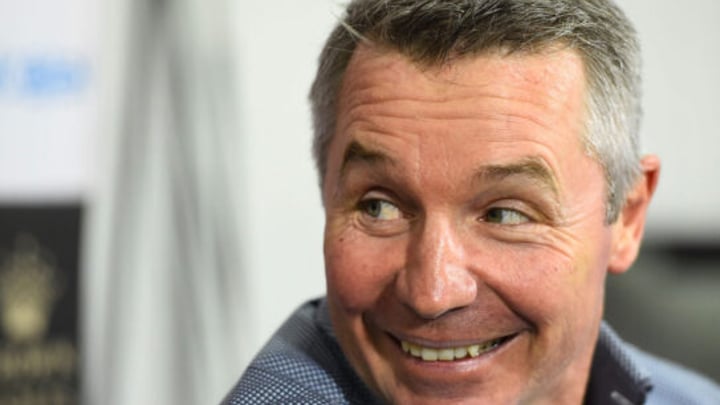 A shocked rugby league community has joined high-profile figures and fans alike in mourning rugby league star and premiership-winning coach Paul Green following his sudden death at the age of 49 on Thursday, August 11.

Green passed away in his Brisbane home with a post-mortem expected to be carried out in order to provide much-needed answers to those close to him regarding the cause of death.

Green’s “devastated” family is among those who are desperately seeking answers to such a “tragedy”.

“Today we are devastated,” Green’s family revealed in a statement.

“We have lost a devoted husband, loving father and wonderful brother and son. We cannot find the words that would come close to expressing our feelings, however we would like to extend our thanks to those who have reached out to us with their love and support.

Green’s former Cronulla Sharks teammate, Mat Rogers, had recently spent time with Green for a reunion of former Cronulla players and reflected on his final meeting with his former teammate fondly.

“It was great — we played golf on Friday together and spent time at the reunion together,” Rogers said.

“He was telling me about the new boat he’d just bought for the family and I was looking forward to going for a ride.

“I can’t believe he’s gone … it makes me appreciate that time I got to spend with him.

“We played together for years and he was just an incredible competitor.”

Chairman Lewis Ramsay of the North Queensland Cowboys, the team Green famously led to their first Grand Final in a decade, said the club “will forever remember Paul as one of the greatest contributors in Cowboys history.”

“Paul first came to our club as a player in the late 90s and was the club’s first Origin representative, but his lasting legacy emanated from his seven-season tenure as Head Coach of the North Queensland Cowboys,” Ramsay said in a statement.

“Paul’s arrival as Head Coach transformed our club from finals contenders to an immediate premiership force, culminating in the historic 2015 Grand Final victory.”

“We will forever remember Paul as one of the greatest contributors in Cowboys history.”

Australian Rugby League Commission (ARLC) Chairman Peter V’landys AM paid tribute to Green, reflecting on a “passionate, smart and witty individual” while offering his condolences to those close to him.

“Paul was a brilliant player, and then became one of the few to make a very successful transition into coaching,” V’landys said.

“As a player, he represented Cronulla Sharks, North Queensland Cowboys, Sydney Roosters, Parramatta Eels and Brisbane Broncos, and throughout his career had a reputation as a halfback who was as tough as he was skilful. Paul was rewarded with the Rothmans Medal in 1995.

“As a coach he led the North Queensland Cowboys to one of the most famous Grand Final victories of all time – against Brisbane Broncos in 2015.

“He represented Queensland and Australia as a player, and only last year coached the Maroons in the State of Origin series.

“On behalf of the game, I’d like to extend our deepest condolences to Paul’s family, his friends, and those who have been inspired and mentored by him over the course of his long career,” Abdo said.

The Brisbane Broncos, where Green made five appearances before announcing his retirement, revealed they were “deeply saddened” following Green’s passing.

We are deeply saddened at the tragic passing of Queenslander and former Bronco, Paul Green.

A legend on and off the field gone far too soon ❤️ pic.twitter.com/wTe4pe1bvw

Green made his debut with the Cronulla Sharks in 1994, impressing many with his maturity and impressive skills as a halfback. Sharks CEO Dino Mezzatesta conveyed the shock many felt at the Sharks club as well as the wider rugby league community.

“To hear of Paul’s passing is a shock to many of us and especially those who came into contact with him at our Great White Sharks reunion day on Saturday,” Mezzatesta said.

“Many of the Great Whites have made contact with the Club today expressing their sadness and shock, it has demonstrated on a number of levels how Paul was regarded and respected by his peers but also by many from our Club.

“Our thoughts and prayers at this extremely difficult time are with his family, friends and also his many former teammates, not only those he played with at Sharks, but also from the other clubs where he played and coached.”

Tributes were not only confined to the rugby league community with many high-profile political figures also expressing their condolences over Green’s passing.

Shocked and saddened to hear of Paul Green’s death. Deepest condolences to his friends and family.

Queensland Opposition leader David Crisafulli paid tribute to a “wonderful player” who was a “Maroon through and through”.

Paul Green was Maroon through & through.

He was a wonderful player but his greatest achievement came as a coach when he guided the Cowboys to a maiden Premiership in 2015.

I’m deeply shocked to learn of his death & send my condolences to his family, friends & the NRL community. pic.twitter.com/2999UC1rin

Devastating news about Paul Green, a gutsy and much-admired Queenslander gone too soon, thinking especially of his loved ones at such a horribly sad time #auspol https://t.co/BDPBsyZBWs

State Member for Townsville Scott Stewart was “shocked to hear of his death” and offered his condolences to Green’s friends and family.

Paul Green will always be an icon of Townsville. He took the North Queensland Cowboys to their first grand final win and it was a moment that brought the region together. I’m shocked to hear of his death and send my condolences to his family, friends and the NRL community. https://t.co/Lezo0T8x3O

Shocking news re the passing of Paul Green. An incredible player and coach. Thoughts and prayers are with his wife and children.

The rugby league community and political figures were joined by fans of the game who came out in droves to pay tribute to Green and honour his stellar rugby career both on and off the field.

RIP Greeny amazing Coach doing what he did for the cowboys and Queensland condolences ???? to you and your family ❤️????

Watched him play live many times, was an absolute gun. RIP mate

Very sad news! ????
It’s been a shocking couple of weeks for Australia and our many fine entertainers, and now sports people!
RIP Paul!