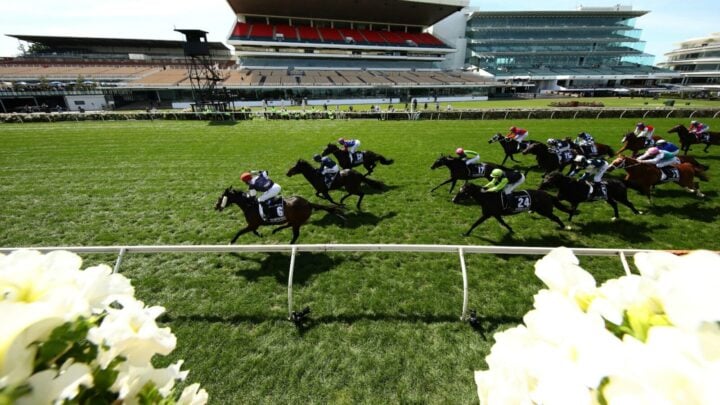 Anthony Van Dyck was forced to pull out of the race just 400 metres after the start. Source: Getty.

Melbourne Cup fan favourite Anthony Van Dyck has been euthanised after breaking down in the race, multiple news outlets have reported. The Irish five-year-old, who was being ridden by star jockey Hugh Bowman and trained by Aiden O’Brien, was forced to pull out of the race just 400 metres after the start.

Racing Victoria’s head of integrity Jamie Stier broke the news. “It is with sadness that we confirm that Anthony Van Dyck had to be humanely euthanised after sustaining a fractured fetlock during the running of the Melbourne Cup at Flemington,” he said in a statement.

“The horse received immediate veterinary care, however he was unable to be saved due to the nature of the injury sustained.”

“Our sympathies are extended to the owners of Anthony Van Dyck, trainer Aidan O’Brien and all his staff who cared for the horse and are greatly saddened by their loss.”

Racing.com was one of the first to break the news on social media, writing on Twitter: “Anthony Van Dyck has been humanely euthanised after sustaining a fracture to his fetlock. Our deepest thoughts and condolences are with all connections.”

Other social media users have since taken to Twitter to pay their respects, with one writing: “RIP Anthony Van Dyck. Too young and too good.” Another added: “Rest In Peace Anthony Van Dyck.”

Tuesday’s incident comes two years after CliffsofMoher, who was also trained by O’Brien, was euthanised in front of grandstand crowds after the horse broke its shoulder.