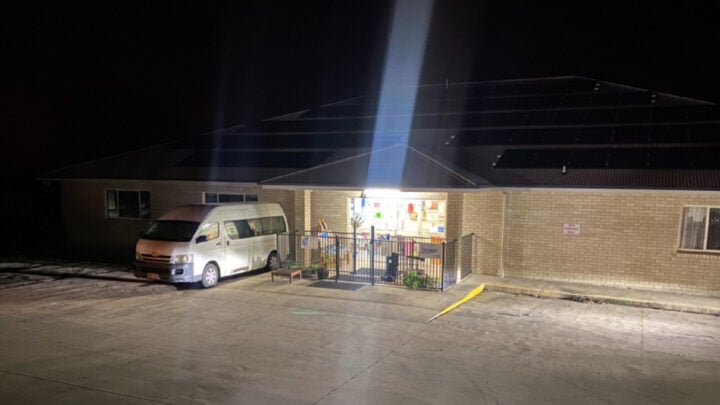 Detective Inspector Darrin Shadlow revealed to the ABC that the young girl was discovered "hours later when staff went to use the bus for the after-school pick up at about 3pm". Source: @R_DAlessandro9/Twitter

A three year-old girl remains in a critical condition in hospital after the toddler was allegedly left on a scorching mini bus for several hours.

Police allege the young girl was discovered alone on the bus just before 3pm on Wednesday, May 4. She was in an unconscious state at the time of discovery before being rushed to Rockhampton Hospital in a critical condition.

According to 7 News, “Police and ambulance officers were called to the Le Smileys Early Learning Centre on Lucas Street in Gracemere”.

The young girl’s father, Shane Austin, revealed the girl had suffered serious health effects from the shocking ordeal and that she’d been taken to a Brisbane hospital “for a deep brain scan” and that “her kidney was failing”.

Speaking to the Courier Mail, the young girl’s distraught father described his daughter as “the heart of the daycare”.

“She’s the most loudest little girl they tell me… she’s the heart of the daycare,” Mr Austin said.

Nevaeh Austin, the 3-year-old girl found unresponsive on a daycare bus near Rockhampton remains in a critical condition this morning.

Her father has told me:

“She’s the loudest child, the most energetic child, she was the heart of her daycare.”

Detective Inspector Darrin Shadlow revealed to the ABC that the young girl was discovered “hours later when staff went to use the bus for the after-school pick up at about 3pm”.

“On the crew’s arrival, Queensland Police were already on scene and escorted the crew into the childcare centre where the young child was on the floor in the admin area,” Thompson revealed.

“I get goosebumps just as I speak about it now,” Thompson admitted.

“When a child is sick, it’s traumatic, and when one is as critical and unconscious, your heart goes out to them.”

According to the Courier Mail, Michelle O’Rouke, owner of Le Smileys Early Centre informed parents that the centre would cease all forms of transportation.

The incident comes as particularly grim news for Queensland after a three year-old boy tragically died in very similar circumstances in early 2020.

Maliq Nicholas Floyd Namok-Malamoo was discovered on a Goodstart Early Learning Ltd mini bus after being left inside for almost six hours. The young boy died from heat stress.

On Thursday morning, May 4, Karl Stefanovic was left on the brink of tears during an interview on the Today Show with the late Maliq’s mother and godmother as they discussed Wednesday’s shock incident.

Stefanovic appeared visibly distraught and lost for words as he and co-host Allison Langdon acknowledged the horrific incident.

“What else do you say huh?” Langdon said to Karl when the interview ended.

“There is nothing else to say to that. And that family right there, reliving that. It shouldn’t happen,” Langdon said.