The Screen Critic: From Rom-coms and superhero tales to a David Bowie tribute 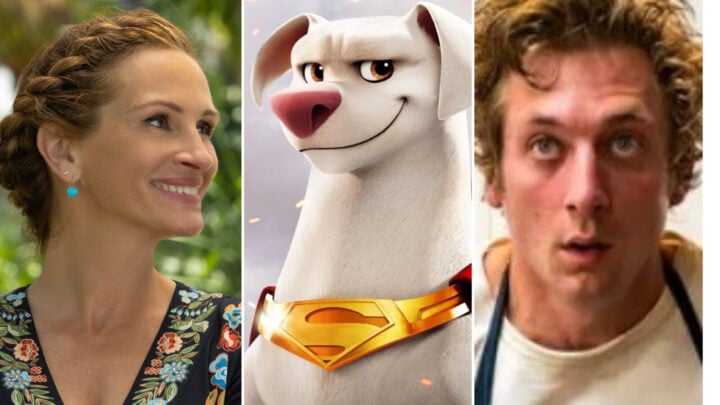 Love is in the balmy air of Bali as evergreen A-listers George Clooney and Julia Roberts join forces in Ticket to Paradise, a likeable, souffle-lite romantic comedy that’ll have you smiling rather than laughing out loud.

As a long-divorced couple still at war with each other, the pair are perturbed to learn their daughter (Kaitlyn Dever) wants to give up a lucrative legal career so she can marry the attractive Balinese seaweed farmer (Maxime Bouttier) she met while on holiday after graduating law school.

Their dastardly plan is to pretend to get along so they can prevent the wedding, a cute ruse that causes a nice handful of comic flare-ups before inevitably leading the ex-couple to re-assess how good they were together.

Breezy and light in tone, the film is a pleasant ride, feeling much like the type of rom-com Roberts made back in the 1990s and early 2000s when she reigned as queen of the genre.

The banter between her and Clooney keeps the film afloat, though it does side-step the whole idea of a young woman sacrificing her career for the sake of an impulsive marriage. It’s a weak point in the film, but forgiveable.

Those in the mood for a dash of dark fun should enjoy the cheeky horror-comedy Bodies Bodies Bodies, a proficiently executed, blood-splattered tale about five device-addicted Gen Z girls who visit a secluded mansion – they’re always secluded in these movies, aren’t they? – for a private party timed to coincide with an impending hurricane.

With the power going on and off, things turn nasty when a game about hunting a pretend murderer becomes all-too-real and the girls suspect a real killer is lurking in their midst.

Starring Maria Bakalova (from Borat Subsequent Moviefilm), it’s a terrific, tight little horror comedy that pulls off that most difficult of tasks by blending frights in with the funny.

Given how superheroes are all over the place these days, it’s no surprise that animals are now getting in on the act.

So, behold DC League of Super-Pets, a crowd-pleasing animated lark about Superman’s super-powered pet dog Krypto (voiced by Dwayne Johnson) and his odd assortment of pals.

While the blizzard of action is pretty standard stuff, the film is held together by the interplay between Krypto and pet store escapee Ace (Kevin Hart), which plays on the theme of pet love. Very well done.

A superhero story of a very different, very refreshing kind is Samaritan (Prime). Sylvester Stallone (Rocky; Rambo; Rhinestone, etc) plays Joe, a garbo and retired icon who is coaxed back into service by neighbourhood kid Sam (Javon Walton) who can see through his denials.

More thoughtful than most Marvel epics, the pyrotechnic battle between Joe and local villain Cyrus (Pilou Asbæk) is neatly countered by the growing bond with his young acolyte, who comes to learn some uncomfortable truths about the nature of power. An unusual and welcome entry into the crowded superhero genre.

Even though it doesn’t have any dragons in it, The Bear (Disney+) has become one of the year’s buzziest streaming events.

Taking us into the failing fortunes of a debt-laden Chicago sandwich bar, we meet high-end chef Carmy Berzatto (Jeremy Allen White from Shameless) who has left his high-paying job in a top restaurant to try and salvage the place after the suicide of his beloved, though incompetent, brother.

Working furiously to instil some sense of order and structure in his dysfunctional kitchen, Carmy struggles to ward off debt collectors, health department warnings and workplace warfare in a blistering eight-part comedy drama about modern-day stress and the difficulty of confronting tradition with change.

Leading a hot-tempered ensemble, White is outstanding as a working man working hard to sustain his brother’s legacy, a task made all the more difficult by his loving uncle Jimmy Cicero (Oliver Platt) whose offers to buy the place come with the threat of wholesale transformation.

Engrossing and highly entertaining, the show is definitely worth the 247-minute investment of your time – save for the final 20 minutes when the story inexplicably lurches for easy answers to Carmy’s problems. It’s the only sorry point in an otherwise excellent enterprise.

Anyone who knows anything about music legend David Bowie will know that cramming his brilliant, wide-ranging career into one film is well-nigh impossible.

Still, the superb feature-length documentary Moonage Daydream gives it a good try. The editing might get a little fevered at times but by the end of this dazzling portrait, no normal person will be in any doubt of Bowie’s visionary genius or of his ability to bend convention to his own ends.

Now, a word of caution for the public good: Pinocchio (Disney +), the latest live-action remake of an animated classic, is a lifeless, over-long washout. All it does is remind us of how brilliant the 1940 original was. If only the suits at the studio would pause a moment before hitting the green light on these remakes and ask “what is the point?”.

Not even the heavily accented presence of Tom Hanks can save a film that turns out to be as wooden as Pinocchio himself.