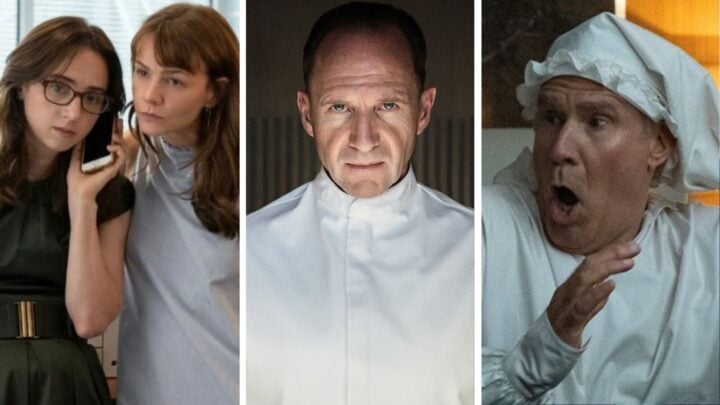 Zoe Kazan and Carey Mulligan in She Said (Universal); Ralph Fiennes in The Menu (Searchlight Pictures); Will Ferrell in Spirited (AppleTV+)

The intrepid reporting that triggered the overdue downfall of the once great, eternally disgraced film producer Harvey Weinstein is at the heart of She Said, an excellent, tough-minded, factual newsroom drama that isn’t afraid to name names.

Without becoming a #metoo soapbox, the film keeps a level head as it details how their work (along with separate reporting by Ronan Farrow for The New Yorker) brought the issue of sexual misconduct to the forefront of workplace culture. It’s a very good film on an important topic. It’s bound to get Oscar attention.

Thankfully, Daniel Craig has perfected the southern accent of the charming, self-effacing Detective Benoit Blanc for the fun ensemble murder-mystery jaunt Glass Onion, a stand-alone sequel to the hit 2019 comedy Knives Out.

Our Poirot-inspired sleuth is among the gaggle of guests invited to the lavish island home of industrial billionaire Miles Bron (Edward Norton) who is hosting a murder-mystery game for his closest friends and associates.

Again written and directed by Rian Johnson (The Last Jedi) and with a bubbly ensemble including Janelle Monáe, Kate Hudson, Kathryn Hahn, and Dave Bautista, the film will delight fans with its many twists and its loving embrace of that intriguing old device where a series of events is played out, then played out again but from a different and revealing point of view.

Enjoyable and engaging, those with a Netflix subscription might nonetheless opt to wait until it hits the stream on 23 December, just in time for Christmas.

Speaking of which, Will Ferrell and Ryan Reynolds deliver lashings of festive delight as they sing and dance their way through Spirited (AppleTV+), a boisterous, funny, highly inventive modern-day take on the Charles Dickens classic A Christmas Carol.

Also starring Octavia Spencer as a corporate lackey whose dirt digging plays havoc with her conscience, Spirited boasts a surprisingly strong story about the importance of change and is positively stuffed – yes, just like a Christmas stocking – with splendidly staged old-school musical numbers that are fabulously choreographed and photographed. Enjoy.

Like Glass Onion, The Menu also has a premise that involves rich people on an isolated island, only here they are visiting the super-exclusive restaurant run by super-famous chef Julian Slowik (Ralph Fiennes). They’re expecting a succession of high-end dishes but there’s a lot more in store as Slowik also begins serving up their secrets.

Unfortunately, what starts out as a deliciously wicked black comedy soon runs out of puff, though Fiennes is convincing as a celebrity chef whose mind might be going a little off.

If you’re still in the mood for a movie about eating then you’re bound to love Bones and All, the sweet, tender-hearted tale of two young people who explore each other’s feelings while on a road trip across the heartland of America.

Those who are revelling in the blessed run of high-quality horror films at the cinema are likely to love the delicate balance of romance and body horror. The soiree stars Taylor Russell, Timothée Chalamet (Dune), and the ever-versatile Mark Rylance as an elder “eater” eager to help young cannibals get through their secret lives.

If you’re in charge of young children who are having trouble sleeping, a visit to Disney’s latest family movie offering Strange World might just do the trick.

Slow-moving and extraordinarily dreary, the tiresome adventure involves a team of citizens from an isolated village who embark on a very unexciting trek through an underground world populated by blob-like plants and creatures. Yawn.

And it’s a worry. Strange World is the third Disney dud in a row after Lightyear and Pinocchio. What’s going on? They must be running low on pixie dust.

Equally puzzling is the erratic trajectory of Mel Gibson. He’s a veteran actor with a wide range and a superb Oscar-winning director – so, what’s he doing in another low-flying piece of junk like On the Line?

He plays a late-night radio shock jock who gets embroiled with a twisted caller. Shot on video and featuring some awful dialogue, it’s definitely one to avoid while we live in hope that Lethal Weapon 5 will see our Mel get back on the horse.

Proving once again that good war films are, in essence, anti-war films, All Quiet on the Western Front (Netflix) is a sterling, powerful remake of the 1930 classic about the experiences of a young German soldier (played by Paul Bäumer) on the blood-soaked killing fields of Europe during the First World War.

Many gruelling battle sequences vividly recreate the scale of the slaughter as scores of soldiers scramble across muddy ground pitted with bomb craters and strewn with corpses. They charge into the murderous sweep of heavy machine gun fire, confront the merciless onslaught of giant tanks, and, perhaps worst of all, engage in horrifically intimate hand-to-hand combat.

A must-see for war-movie aficionados, the film was shot in German but can be viewed with a very good English-language soundtrack.

This is strongly recommended. The dubbing is barely noticeable and not the distraction some purists make out.

It’s also far preferable to subtitles as you don’t have to spend half your time reading and can concentrate on the images, which is precisely where the filmmakers want your attention fixed.