The populist politicians to watch out for this election 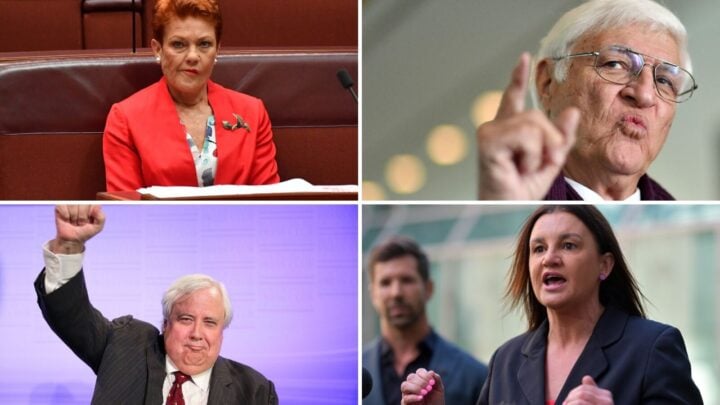 Whether this is going to be a good election for populist parties in Australia remains to be seen: stay tuned. Source: Getty

Populist politicians have been household names in Australian politics over the past decade, from Pauline Hanson to Clive Palmer, Bob Katter and Jacqui Lambie.

They tend to only get a small amount of the popular vote – between them, at the last election, they attracted 7% of first preferences in the House of Representatives and 8.32% of the Senate vote. Yet they can play a big role on the Senate crossbench and can get significant concessions regarding their pet issues.

They can also change the tenor of politics in Australia, and the way their preferences fall – or how they spend their advertising dollars – can make or break close electoral races.

But where do these populist parties – who all claim to speak for “the people” against “the elite” – sit as we begin the 2022 federal election?

Who are the main players to watch out for?

In the light of the COVID-19 pandemic, two of these parties have sought to capitalise on anti-vaccination and anti-COVID vaccine mandate sentiments.

The United Australia Party has made this its core – maybe even single – issue. As you have surely seen on those yellow billboards, the party is promising “freedom” from the COVID restrictions and mandates of the past years. Meanwhile, party leader (and former Liberal MP) Craig Kelly spruiks hydroxychloroquine) and ivermectin as COVID treatments, despite evidence showing they’re not effective.

He is tipped to spend A$70 million on the campaign. In 2019, Palmer spent a record $84 million without winning a seat, but claimed his anti-Shorten ads “shifted” voters away from Labor.

One Nation has also tried to capitalise on the anti-vaccination movement’s prominence. While it is pushing its usual anti-immigration talking points, it has supplemented these with anti-mandate messaging, with Hanson and senator Malcolm Roberts appearing at anti-vaccine rallies in Canberra.

The other two populist parties are relying on their regional appeal.

The Jacqui Lambie Network is hoping to extend the former independent’s appeal more widely across Tasmania. The party’s message is all about making life better for the “underdog” – combining an anti-corruption message with campaigns for better healthcare, education and opportunities for young people and workers in Tasmania.

Katter’s Australian Party, meanwhile, portrays on a division between “the people” of rural Australia (particularly Far North Queensland) and the distant “elite” of Canberra and the big cities. As usual, it will be focusing on regional development, agricultural subsidies and ensuring FNQ gets fair treatment.

Coronavirus has markedly shifted the political, social and economic landscape since the last federal election.

Australia’s closed borders for much of 2020 and 2021 has made the anti-immigration position of One Nation less salient and effective, so it is no wonder they have pivoted to an anti-COVID mandate position to try and extend their appeal.

Meanwhile, the United Australia Party has completely rebuilt itself around the issue, moving from its almost singularly “Stop Bill Shorten” message in 2019.

Beyond this, repeated rorts and integrity scandals during the Morrison government have given fuel to populists (as well as numerous independent candidates) to push for more transparency in politics.

What are the key races to watch?

Other than Katter, who has held the seat of Kennedy since 1993, it is highly unlikely populist parties are going to have any success in the House of Representatives (despite the United Australia Party’s claim Kelly will be the next prime minister).

The Senate is where things will be interesting. The Queensland senate race is the big one for populists, with the two most prominent populist politicians in the country – Hanson and Palmer – running for what will likely be the sixth seat in the state. They also face competition from former Queensland Premier Campbell Newman (running for the Liberal Democrats this time around).

The final seat in some other states will also be worth watching. In Tasmania, the Jacqui Lambie Network is throwing its resources behind the campaign of Tammy Tyrell, their lead Senate candidate. Tyrell is a long-time office manager and advisor to Lambie (who is not up for re-election this time).

What are the key unknowns?

There are two big questions about populism in 2022.

First, has the political potency of the anti-vaccination/anti-lockdown message passed? As we enter the so-called era of “COVID-normal”, where restrictions are wound back and lockdowns are supposedly a thing of the past, it is unclear whether the United Australia Party and One Nation have backed the right horse at the right time.

Second, are voters sick of the mainstream parties, or sick of the Morrison government? Populists prosper when there is a widespread sense of political malaise, but time will tell if they want to punish the political class in general, thus leading to a populist upswing, or the Morrison government specifically – in which we can expect much of that frustration to filter to a vote for Labor and the “teal” independents.

Whether this is going to be a good election for populist parties in Australia remains to be seen: stay tuned.

This article was written by Benjamin Moffitt, Associate Professor, Australian Catholic University and republished from The Conversation under a Creative Commons license.