‘We love you’: Thai cave survivors deliver special message for Australians of the Year 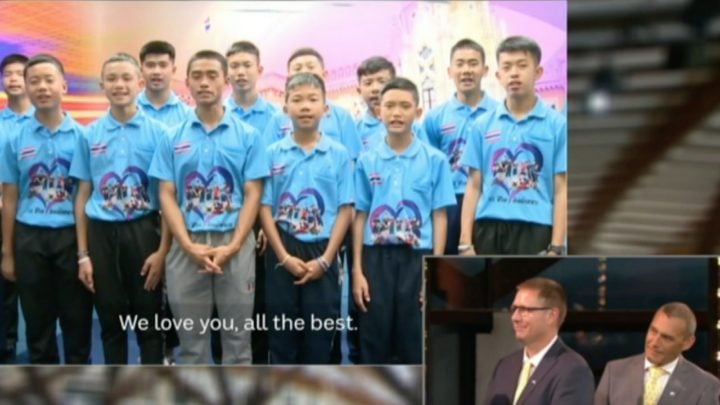 Australians of the Year Craig Challen and Richard Harris held back tears as the Thai soccer team they rescued from a cave delivered a special message. Source: Youtube.com/ABC News (Australia)

Dr Craig Challen and Dr Richard Harris have been announced 2019’s Australians of the Year at a ceremony at the National Arboretum in Canberra on Friday evening.

The two men are cave-diving medics who helped rescue a soccer team in last year’s Tham Luang Cave disaster in Thailand. As part of their rescue mission last year, they helped save 12 boys and their coach from flooded caves and offered invaluable advice on how to get the stranded boys out safely.

Shortly after receiving their awards at the ceremony, Challen and Harris were surprised with a special message from the boys they helped save.

“We have a little surprise,” the men were told. “We want to share with you a very special message from some people that your work has profoundly affected.”

The men, who were stood on stage, were surprised when a video of the boys they saved appeared on the screen behind them. Dressed in their soccer jerseys, the team thanked Challen and Harris for saving their lives.

“Good evening. Thank you very much Dr Richard Harris and Craig Challen,” the boys said. “We love you. All the best.”

The moment can be seen at the 13-minute mark in the video below.

The men seemed lost for words after the video and were seen tearing up on stage.

“Well that speaks everything to what we’ve been involved with,” Harris said. “It’s actually the first communication we’ve had with the kids so that’s pretty special.”

Challen added: “A lot’s been said about this little adventure we had but I think the bottom line for me is that there are 13 families that have still got their sons that wouldn’t have if we hadn’t been there as part of that group. That’s what floats my boat.”

Harris and Challen’s win is the first time two people have been jointly awarded the title since state and territory award finalists were introduced to the program in 2004.

Challen on the other hand has dived some of the country’s deepest wreaks and has a set depths records in diving. He was named Technical Diver of the Year in 2009. Both heroes were previously awarded the Star of Coverage for their bravery.

The Thai cave boys have congratulated two Australian divers, their rescuers, on winning Australian of the Year #AustralianOfTheYear pic.twitter.com/uYiNP8LZ5q

Following the announcement on Friday evening, Starts at 60 readers were quick to congratulate the men on their win.

One reader on Facebook said: “Wonderful choice for two amazing brave men that had only intention of saving those boys and leader, God bless them both for what they have done, one of the best decisions ever of Australian of the Year choices ever made.”

Another message read: “Well done. For once they got the Australian of the Year right.
Congratulations.Both very humble people. We are so proud of you both.”

A third added: “Congratulations As the world watched, the two of you bravely and selflessly worked towards the miraculously successful outcome and got everyone out safely. You are both extremely worthy recipients and brilliant human beings.”

What do you think of this year’s Australian of the Year winners? Are you a fan of Craig Challen and Richard Harris?