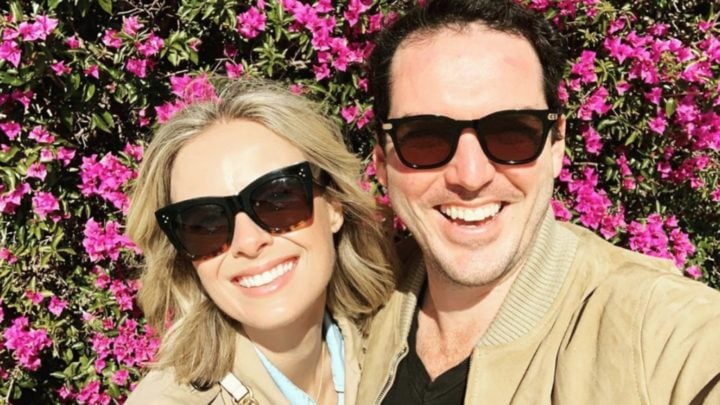 Sylvia and Peter first met while both working at Channel 9 in 2013. Source: Instagram - Sylvia Jeffreys

Former Today show presenter Sylvia Jeffreys and her husband Peter Stefanovic have revealed they’re expecting their first child. The proud parents-to-be, who met while working together at Channel Nine, confirmed the news on Instagram, with Sylvia writing they were “over the moon” to be pregnant with their bundle of joy: a baby boy.

“We’re having a baby boy and we’re totally over the moon!!” wrote the 33-year-old, alongside a gorgeous photo of herself and Peter.

We’re having a baby boy and we’re totally over the moon!! 💫

Peter, 37, also shared a post on his Instagram, writing in the caption: “Soon to be a family of three and we are rapt! Good thing I’m already match fit with the whole no sleep thing.”

Soon to be a family of three and we are rapt! Good thing I’m already match fit with the whole no sleep thing 😁

Thousands of fans and their celebrity friends have already flocked to Instagram to congratulate the golden couple on the exciting news. “About as over the moon as we all are!! What a lucky lucky bub he is. Huge congrats to two of the best. Now the fun really begins!!” former Today host Lisa Wilkinson wrote.

“Holy. What. Wow. Congrats you two. You will make fine parents. Your little fella will have the best of both worlds. Best news I’ve heard in ages,” Ben Fordham commented.

Sylvia and Peter first met while both working at Channel 9 in 2013. After getting engaged in mid-2016, the couple official tied the knot in April 2017 in a lavish ceremony in Kangaroo Valley, south of Sydney.

Best day of our lives ❤ @peter_stefanovic

When previously asked if it was love at first sight, Sylvia told The Sydney Morning Herald it was pretty close. “I think it was pretty obvious, certainly was to everyone around me – my mum and my sister, in particular, knew that there was something there,” she said.

Peter was still living in London and working as a foreign correspondent at the time, but instead of putting things on hold, he decided to woo Sylvia by writing her letters. “We started pen-palling. It was old school and traditional,” she said. “To sit down and hand write a letter and post it to you – it doesn’t matter what’s in that letter – but that is a gesture in itself.”

Meanwhile it comes after the 33-year-old made the surprising announcement she was leaving the Today show in December last year. In a statement released at the time, Sylvia said she was looking forward to working on new projects.

“I’ve loved and embraced every minute of my Today show chapter and feel humbled to have worked with so many passionate people — hosts, studio crew, cameramen and producers — who have become my great mates. There are few shows that are fortunate to have such an engaged audience, and I thank our viewers for inviting me into their homes day after day,” she said.

Sylvia’s exit followed that of her brother-in-law Karl Stefanovic, who was axed from the show a week earlier, and long-standing entertainment reporter Richard Wilkins, who has been moved over to Today Extra. Sylvia’s husband Peter at the time also announced that he was leaving the Nine Network altogether after an illustrious 15-year career at the station as a host and foreign correspondent. Peter now works on the Sky News show First Edition, alongside Australian journalist Laura Jayes, while Sylvia recently launched a news bulletin created specifically for Facebook.

Do you have a message for Sylvia Jeffreys and her husband Peter Stefanovic? Is your family expecting any babies this year?