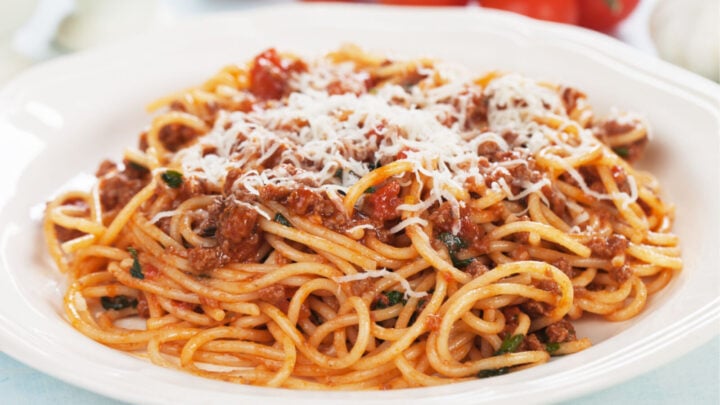 Many people have their own takes on the classic Italian dish. Source: Getty.

More than 6,000 have waded into a debate over what should be included in a home-cooked version of the Italian classic spaghetti bolognese, after an American woman revealed that she adds a little – or a lot – of something sweet into her dish.

The woman, from Texas, USA, sparked fury among fellow foodies when she shared a photograph of a pan of bolognese sauce topped with a heap of sugar to Facebook. “Let’s argue,” she wrote. “Do sugar go in spaghetti?” [sic]

The home cook then claimed the sugar offsets the acidity of the tomatoes, but many people disagreed with the ingredient, with one person even describing it as “straight diabetes in the pot”. Another commented: “As an Italian from Brooklyn this offends me and hurts my insides.”

But while some disagreed with the use of sugar altogether, many agreed that “a dash” was common to reduce the acidic taste from the tomatoes. One person commented: “You might as well replace the sauce with ketchup because that’s what you’re making with all that sugar.”

Another wrote: “Well, yes, but not a cup. A teaspoon or so takes the bite off the acid of the tomato.”

However some people did agree with Trina’s recipe though, with one Italian commenter and another from the Phillipines, assuring the home cook that they whipped up similar recipes themselves.

It seems home cooks are not the only ones who like to experiment with the traditional spaghetti bolognese recipe though, as professional chef Maggie Beer revealed her own take on the dish earlier this year.

While most of us might rely on tomatoes, onions, carrots and even milk to achieve that classic Italian-inspired taste, the Barossa-based cook revealed she likes to add something a little different to her spaghetti sauce – chicken livers.

Maggie, 75, unveiled her unusual secret ingredient during a recent episode of her ‘Cooking with Maggie’ video series as she invited fans into her kitchen to watch her whip up the tasty dish, and learn how to make it themselves.

“Today we’re going to have some comfort food,” Maggie says at the start of the 15-minute video. “I can just imagine anyone wanting to eat this … because I’m making a spag bol. And it has a twist, of course!”

Do you add anything unusual to your spaghetti bolognese?